For “High Fidelity,” there are a handful of component parts that, for lack of a better phrase, just have to work. A balancing act of romance, music, and city life, this year’s Hulu adaptation of the beloved Nick Hornby novel is such a soothing watch because all of those pieces clicked right into place.

In some ways, it all comes back to Championship Vinyl, the record store where owner Rob (Zoe Kravitz) and the shop’s two stalwart employees Cherise (Da’Vine Joy Randolph) and Simon (David H. Holmes) hold court on everything from fundamental musical debates to the health of their respective dating lives.

As Kravitz describes, that Championship Vinyl set was as close to a functioning store as you could get without actually having paying customers.

“In between setups, we would hang out in the office on the couch. It really felt like it was just this store where we would hang out,” Kravitz told IndieWire. “There was trash in the trash cans, notepads with notes that we’d leave each other on them. We’d sift through records all day. It was a very real place and it definitely added to added to the environment. It was the environment. Our production designer Almitra Corey is an incredible artist and did such a great job.”

One of the luxuries of the show is that it’s not limited to indoor locations. Shifting the setting of the show from the London of Nick Hornby’s novel and the Chicago of Stephen Frears’ 2000 film to the Crown Heights neighborhood of Brooklyn, “High Fidelity” takes full advantage of the city surrounding it.

“I’ve lived in New York for 15, 16 years now, and there’s just there’s nothing like it,” Kravitz said. “When you get to make something that takes place there and really be on that street and have that energy, with the extras and everything? They’re amazing, they’re local, they live around there. So you’re feeding off of that energy. And you can’t fake that.” 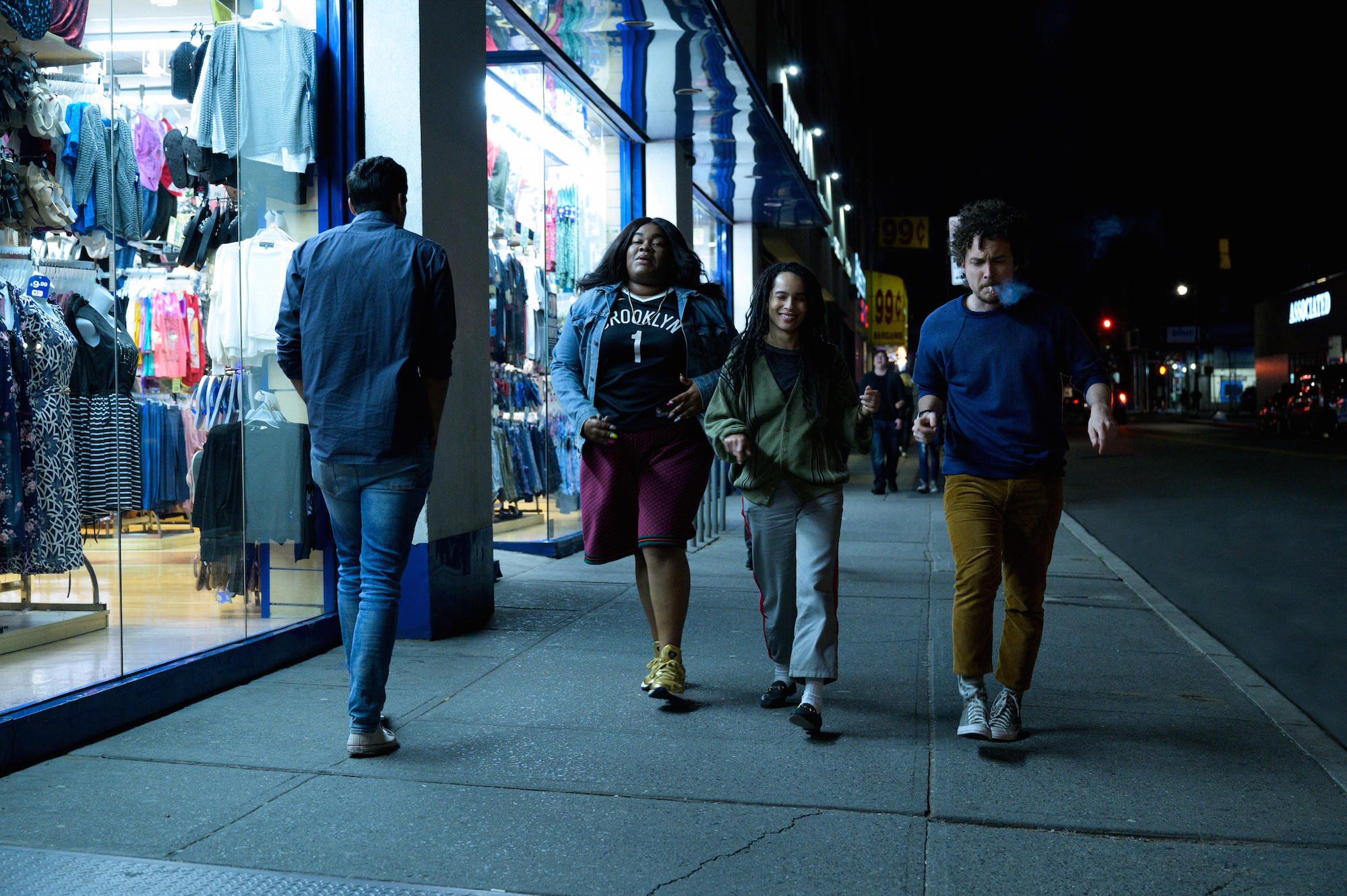 It’s easy to get invested in Rob’s life, traveling through her past dating history, a virtual museum of heartbreak. The character speaks directly to the audience at key moments, letting you in as she mulls over key decisions or admits bygone mistakes.

Unlearning traditional performance techniques and staring right into a camera isn’t always the easiest task. When she hit a bit of a mental roadblock at the beginning of production, Kravitz ended up getting some unexpected help from two the biggest “High Fidelity” experts on the planet. At a dinner in New York with Hornby and Frears, Kravitz found out a small bit of info about the making of the film version that helped bring her performance into focus.

“We were in the middle of shooting the pilot, and I was just telling him that I was having a hard time with the direct-to-camera stuff. And he said that John Cusack would always ask him to bring the camera physically closer,” Kravitz said. “That was a major breakthrough for me because I realized that when something’s further away from you, you perform like you’re on a stage. Your performance becomes performative. But when something’s close to you, as a person would be that you’re talking to, you can create intimacy. That camera becomes your best friend that you can say anything to.”

Maybe the most memorable instance of that technique in this new “High Fidelity” context comes at the end of the second episode. After finding out that her ex has been dating some “Lily Girl,” Rob abandons her outdoor lunch, fuming. Once she’s safely around the corner, she screams as she moves toward the camera, “What fucking Lily girl??” (It’s such a perfect moment of focused rage that it gives the next episode its title.)

“I wanted it to be a little bit strange in a way where you’re watching this person unravel in a way,” Kravitz said. “I did get the note when we were shooting that it was too angry. And I refused to do it any less angry because I knew it wouldn’t work. These moments in this character’s brain, unless you go to the uncomfortable place that you would not let anyone actually see, then what’s the point of being in someone’s head? Even though the moment plays for comedy, I think the key to these kinds of moments is being really fucking angry, letting yourself go to that place.” 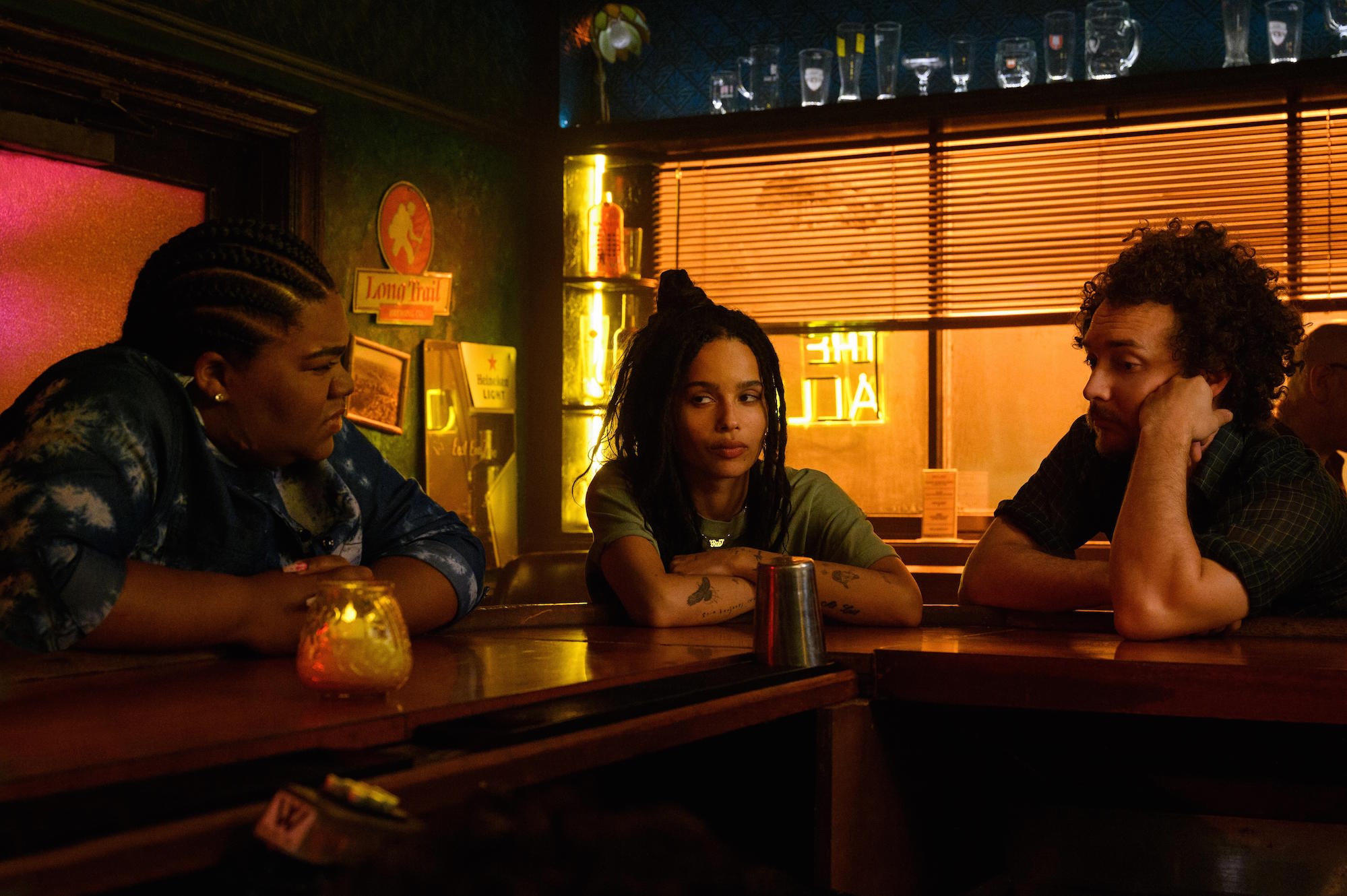 Another foundational pillar of the show is the music itself. From the tracks that serve as mood-setters to ones directly referenced in the script, each choice seems carefully crafted to help the viewer understand something fundamental about each character in frame.

When it came time to remix the film’s classic Beta Band moment, Kravitz had just the thing.

“We changed it to Swamp Dogg, which is a song that I had been putting on playlists for years. I noticed that every time it came on, someone would ask me what it was. So I just had this feeling like, ‘That’s the song,’” Kravitz said. “It wasn’t as though we did calculations of how many B-sides versus big hits we had. Instinctually, we knew that we had to hit that balance. There are moments where you want a song to kick in that you know people will know and love. And then there are so many songs that you’re like, ‘Oh my god, people are going to fall in love with the song if they haven’t heard it.’”

So what are some potential adds to Season 2 if the show gets renewed? When asked, Kravitz gave a considered trio of answers that provide a solid cross-section of the show’s musical instincts.

“I would love to get some more hip-hop in the show. I’d love to get J Dilla on the show. His stuff has just a very good vibe. Let’s get some Portishead on the show. And let me say…Beach Boys. That’d be very cool. I tend to think about things in terms of what just feels really cinematic,” Kravitz said.

Of course, all that music would feel pointless in a show without any human connection. Beyond the pangs and crushes and regret, there’s a real core in the friendship between Rob, Cherise, and Simon.

“It’s hard to fake a history. But when when you spend a lot of time together, the energy is different, the shorthands are different. Even as actors, you feel more comfortable to try weirder shit,” Kravitz said. “And so as time went on, I really felt like you felt the friendship, you felt the history, you felt the inside jokes. Everyone was able to be themselves. I fell in love with them as a group and that was always something that was so important to us. We really said, ‘You have to want to hang out with these people or the show does work.’ And I certainly want to hang out with those people.”

“High Fidelity” is available to stream on Hulu.