An unemployed historian living with her parents in a Macedonia town crashes an all-male Orthodox Christian ceremony and enacts a one-woman feminist resistance. 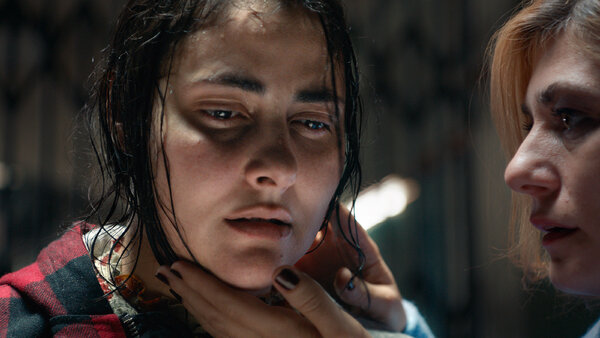 In another world, the rebellious title character of “God Exists, Her Name Is Petrunya” might have been a contented free spirit in a John Waters movie. But Petrunya lives in the conservative town of Stip, Macedonia, and she seems dulled into a standstill by patriarchal rules and motherly interference. That starts to change when she crashes an all-male Orthodox ceremony — every year, a priest lobs a cross into a river and men scramble to grab it — and takes the prize.

Many townspeople throw a Stip fit over Petrunya’s feat, and at the behest of outraged priests, she’s pursued and detained by the police. Petrunya (Zorica Nusheva, with an eye-flashing frustration just short of antic) rises to the occasion by standing up to the intimidation and condescension. It wasn’t always thus: she starts off the movie stuck in bed, a 30-something unemployed historian living with her mother.

The director, Teona Strugar Mitevska, draws on actual events for this good-humored story of occupation and resistance. The independent streak was clearly present in Petrunya somewhere: we’ve seen her fending off a sleazy garment-factory boss and walking off with a mannequin, which she totes everywhere in what feels like a naturally punk move. Mitevska and the cinematographer, Virginie Saint Martin, lend Petrunya’s external world some further off-kilter flair and eye-catching patterns.

But the standoff with authorities dawdles and languishes, and a side plot with a TV journalist (Labina Mitevska) feels one-note. Still, we should all look forward to seeing what Petrunya does next.

God Exists, Her Name is Petrunya
Not rated. In Macedonian, with subtitles. Running time: 1 hour 40 minutes. In theaters and on virtual cinemas.