Ben Shephard and Susanna Reid were joined by West Indies cricketer Michael Holding to discuss his new book, Why We Kneel, How We Rise and the racist abuse he has received in his lifetime. During the interview on Good Morning Britain, he eloquently discussed his experiences and the need for change and education when it comes to race, and accidentally dropped a swear word in which Ben apologised to viewers for.

“We need to apologise, we can’t use, unfortunately that word first thing in the morning,” Ben stepped in. “But everybody understands the sentiment behind it.

“I beg your pardon, I am so sorry,” Michael replied.

“No, no,” Susanna remarked and Ben continued: “We can see how passionate you are about it.” 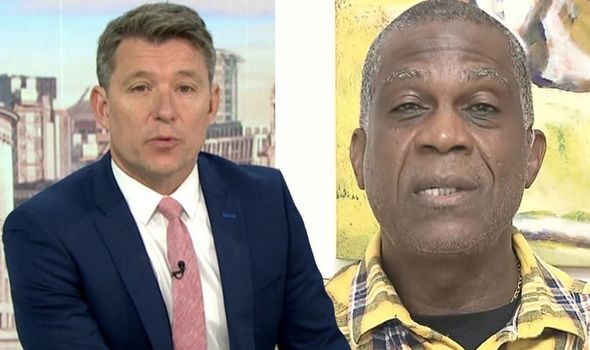 “It’s a reflection of your strength of feeling,” Susanna added.

Speaking about how the book came to fruition, Michael explained it came off the back of his conversation with Mark Austen.

“When I did the interview with Mark Austen, I went back to the commentary box, because I was at cricket and spoke to my boss at Sky and said ‘That’s it, I’m speaking to no one else on this matter’.

“People tend to think it’s like you’re discussing a cricket game or a football game – they don’t understand the emotions that flood through you, you don’t just shed tears because you’re happy, those emotions you don’t want to face them every day,” he told GMB.

“And at that point, I said ’that’s it, I’ll speak to no one ever!’ I had people from the USA, NBC, calling me saying they wanted to speak to me.

“I said ‘absolutely no chance! This is not a football match, you’re getting involved with my life and my emotions’. 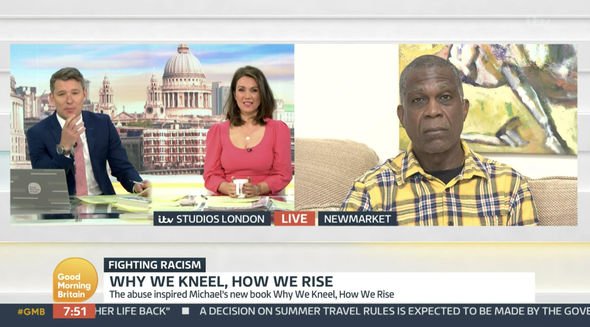 “It’s not an easy task, writing the book was not easy – some of those chapters I have read them more than once, but some of the other chapters I’ve read many times, some I don’t want to read again.

“I sent a chapter to my sister when I was doing the book, and one time she said ‘Mikey I am not reading this, I cannot read this, this is painful’.

“People think it’s something fun going through and fun doing [writing the book], but it’s not,” Michael continued.

When the interview wrapped up, Susanna joked: “And thanks for the language! Frankly, sometimes you need to hear it.”

Competition host Andi Peters spoke about what Michael said and added: “The use of that one word, expressed it all.

“As a person of colour, what you go through is a load of old [b*llocks] and it’s just nice to hear someone say it.

“It’s refreshing to hear someone speak so openly about it on the tv – he speaks the truth,” Andi added.

And Susanna reiterated: “Sometimes the language is entirely justified.”

“Yes Michael you make a lot of sense  #BLM #GMB,” one wrote.

A second added: “He’s talking the truth! Nothing but love for this man.”

“I could listen to Micheal Holding all day! An articulate man and spot on! #GMB,” a third mentioned.

One commented: “Thank u Michael. Very eloquently explained sir. Those that don’t understand just don’t ever want to understand! #GMB.”

“Nothing but straight facts from Michael Holding  #GMB,” a tweet read.

A fan said: “Michael Holding, what an absolute legend, speaks so clearly and passionately about racism, inspirational stuff sir. #GMB.”