From gangsters on boats to maniacal clowns on rampages, this month’s action picks pack a wallop. 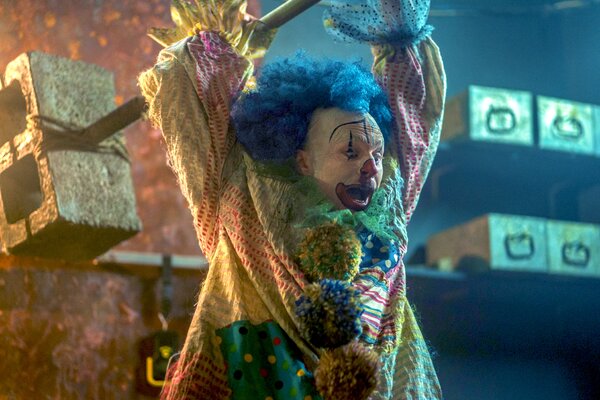 The bruising, short-tempered assassin Mike Fallon (Scott Adkins) returns in an uproarious “Accident Man” sequel that plays like a cross between a “John Wick” entry and a Guy Ritchie film. Following Mike’s rampage against his fellow assassins in the previous film, the latest story takes viewers from London to Malta, where a crime lord (Flaminia Cinque) hires Mike to protect her son (George Fouracres) from a string of hired guns.

Playing Mike’s only ally, Siu-ling, Sarah Chang serves as an impressive, physically comedic foil to the self-deprecating Adkins. Her every leap from the shadows is a hilarious, sidesplitting motif.

Directed by the brothers George and Harry Kirby, “Hitman’s Holiday” features big punches, the kind of Foley sound that leaves a wallop and a keen awareness for the outlandish clichés that make action movies fun. A fight scene between Fallon and Poco the Killer Clown (Beau Fowler), a villain menacingly wielding a mammoth sledgehammer, is so hilarious yet artfully choreographed that you can’t help but respect this film’s commitment to the bit.

‘Hot Blooded: Once Upon a Time in Korea’

Set in 1993, “Hot Blooded” begins with a solemn Hee-soo (Jung Woo) arriving by tugboat to a dock for a meeting with other underworld dons. Seated around a table, one friend gives Hee-soo a rare ginseng plant, the other gifts him a revolver. Hee-soo turns the gun toward the man to his left, and just before he pulls the trigger, we cut to a few months earlier in Busan, South Korea.

Hee-soo is 40. And after lifting himself from a poverty-stricken childhood, he wants the proverbial piece of the pie. Unfortunately, he isn’t a cutthroat operator. A gang war breaks out, and despite knowing that his longtime friend Chul-jin (Ji Seung-hyun) might be trying to kill him, Hee-soo refuses to turn on him.

The Oscars aren’t until March, but the campaigns have begun. Kyle Buchanan is covering the films, personalities and events along the way.

Similar to Michael Corleone, Hee-soo must learn to eviscerate his morals if he hopes to gain wealth and power. The director, Cheon Myeong-gwan, weaves a pensive gangland narrative that is unafraid to balance vicious, blood-soaked double-crosses with melancholy-tinged character studies. And it steadily winds viewers toward a furiously rendered, havoc-filled ending.

Stream it on Netflix.

The “Lost Bullet” franchise is the French answer to the “Fast and the Furious” movies. Directed by Guillaume Pierret, this sequel picks up where the previous film left off. Lino (Alban Lenoir), a former jewelry thief turned auto racing police officer, is still dealing with the loss he suffered when his comrades betrayed him. One of his former colleagues, Julia (Stéfi Celma), finds Lino living in his car and offers him a chance to return to the force. Lino’s anger quickly emerges, however, when he discovers that Marco (Sébastien Lalanne), the man who killed his brother, is in witness protection. Without any thought for his career, Lino unflinchingly seeks revenge.

I greatly enjoyed the first “Lost Bullet” (featuring it in this column last year), primarily because it hummed with exceptional car chases staged to maximum action velocity. The sequel ratchets up the automotive splendor with longer, more elaborate sequences where the crashed cars fly higher, the explosions are bigger and the vehicles move at ungodly speeds. Pierret is steadily building a franchise unafraid to push the limits of the joy that springs from a hairpin turn.

Colson Baker, better known by his musician stage name Machine Gun Kelly, is an underrated actor who often takes unlikely, challenging parts. His angular facial features and tattooed appearance makes him well-suited for brooding roles as outlaws in films like “The Last Son” and “Project Power.” This crime thriller from Andrew Baird continues Baker’s exploration of seedier characters. In it, he portrays Freddy, a low-level criminal fleeing on a cross-country overnight bus after stealing a stash of money and cocaine from his grisly associates.

Hobbled by a gunshot wound, Freddy searches for help from his estranged father (a delectably scummy Kevin Bacon); his nurse ex-girlfriend (Meagan Holder); and Rachel (Storm Reid), a young passenger riding to meet an older man.

The bulk of the film’s activity occurs in the claustrophobic, dimly lit confines of the bus. The tension builds as Freddy slowly bleeds out, confronts his dad, engages in fist fights and devises what to do with the money. Baker imbues Freddy with a fascinating detestability that locks you to his sight.

Stream it on Netflix.

An unassuming, pink-haired young woman arrives at a hotel posing as a call girl for Supple n’ Natural Gals Delivery Service. A callous goon, underestimating this teenager, opens the door and is summarily sliced and diced by Kei (Kanna Hashimoto), an assassin hired to rescue a woman held captive by this underworld gang.

Comparable to Yugo Sakamoto’s gleefully savage “Baby Assassins,” the Japanese director Toichiro Ruto’s “The Violence Action,” adapted from a manga of the same name, follows Kei and her company of quirky hired guns from their home base in a ramen shop to their deadly mission against a Yakuza gang. Along the way, Kei questions if she loves her profession more than the kindhearted accountant (Yosuke Sugino) for the mob she’s been hired to snuff out.

Stylistically and tonally adventurous, the film plops humorous, kooky beats in between frenetic editing and gravity-breaking gunplay. One sequence sees Kei acrobatically spinning through the air and firing rounds in slow motion as blood splatters across the frame with the freewheeling energy of a comic book panel.