It’s been 20 years since Vin Diesel and Paul Walker first started together in The Fast and the Furious. After a couple more sequels, the pair were reunited in something of a reboot for the series in 2009 fourth film Fast and Furious. Their characters Dominic Toretto and Brian O’Conner led the franchise to increasing success across three more movies until Paul tragically died in a car crash on a day off from filming Furious 7 in 2013.

After production resumed, Paul’s brothers Caleb and Cody Walker became stand-ins for their brother to finish his scenes. The late star’s face was superimposed over his siblings thanks to Peter Jackson’s Weta Digital visual effects.

While the end of Furious 7 saw Brian retire to be with his family, so the character is very much still alive in the franchise’s universe.

Since Fast and Furious 9 entered production, fans were speculating as to whether Caleb and Cody Walker would return to help bring Paul’s Brian back for the movie.

Well, the new film is out in cinemas, so does he show up at any point? WARNING: SPOILERS AHEAD. 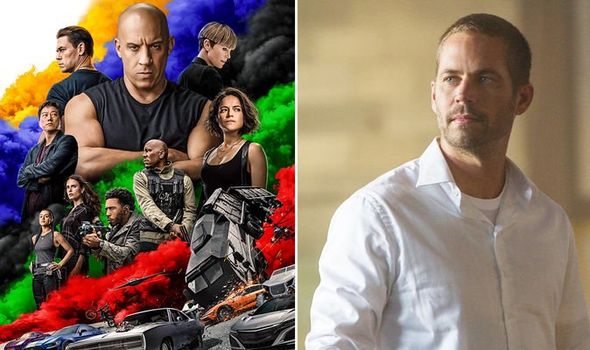 Yes and no. At the conclusion of Fast and Furious 9, the family sit down to a meal together over some Corona beers as usual.

But there’s one seat that’s left open for someone who is still yet to arrive – yep, it’s Brian.

Only we don’t see his face, but his car arriving and parking in the drive for the meal.

A touching tribute to Paul and hopefully a teaser that he’ll somehow be brought back digitally for the franchise’s upcoming ending.

Chris Morgan, who wrote the screenplay for every movie in the series since Tokyo Drift, except Fast 9, will return for Fast 10.

While Justin Lin who directed movies 3-7 and 9, will be helming the Vin Diesel-led finale.

Lin has previously said how Fast 9 is the beginning of the last chapter of the series’ storyline.

Speaking with Variety earlier this year, Lin said: “So Fast 9 is really the beginning of the final chapter of the saga.

“So in doing that I think there’s a lot of room to really place our characters, and Brian obviously is a big part of the universe still.

“I want to always be very respectful in how we present that. I think that [in] Nine, you will feel the presence of Brian, for sure.”

No doubt he meant that final scene tease of Paul’s character driving up to the house for a meal without seeing him in person.

Lin told Entertainment Weekly: “The fact that Brian O’Conner is still alive in this universe needs to be acknowledged.

“We’re treating F9 as the first film of the last chapter, and at some point, it is something I think about and how we can really show his presence but in a respectful way. So it’s always ongoing.

“I feel like in 9 we’ve done it in a way that I feel good about, but, as we go into trying to wrap up the saga, it’s something that I will continue to always be thinking through.”

Fast and Furious 9 is in cinemas now.