Like many of us, actress-singer Emily Alyn Lind has been keeping busy in quarantine by sticking to a routine — or at least trying to. “I’ve always been really good at spending time alone,” Lind, who returns for the sequel to Netflix’s horror tale The Baby-Sitter: Killer Queen and next stars in HBO Max’s Gossip Girl, tells ET. “I’ve been trying to keep some routine, since I’ve heard that’s what you have to do in times like these. But overall, I find that humans are meant to adjust, and I’ve found some harmony in all the madness.”

When lockdown first began in March, Lind invested most of her time and energy into her music, recording and releasing songs at home to keep her mind stimulated and creative juices flowing. Though her original plan to release an EP has since been pushed (for now), Lind’s drive to create music keeps her moving forward, especially when there’s uncertainty surrounding what a new COVID-affected world will look like.

“I think that right now, especially, it’s important for humans to have a reason,” she observes. “Whether or not we love our jobs in normal day-to-day life, we still have a reason to go to work, get up and get dressed, and we’re needed somewhere. It’s a really weird place to live in where you feel like you’re not exactly needed.”

With her music on the back-burner at the moment, Lind is refocusing on stepping back in front of the camera through The Baby-Sitter horror sequel Killer Queen on Netflix and the anticipated Gossip Girl update for HBO Max (more on that later).

In the Baby-Sitter sequel, Lind returns as Cole’s best friend and love interest, Melanie. Two years have passed since they defeated a satanic cult led by his babysitter, but Cole — still haunted by the horrific event — is persuaded by Melanie to let loose and attend a party at a nearby lake. But, as the title suggests, things go haywire fast.

“In the new film, Cole and Melanie are now in high school trying to move on from the crazy ordeal they went through together — in their own ways — but this proves impossible when the cult members of their past return,” Lind sets up, adding that the follow-up has all the ingredients for classic Baby-Sitter horror — “bloody nonsense, pop culture silliness and a lot of familiar faces.” But will Cole and Melanie actually end up together officially? Lind played coy, only offering this tease: “I’m rooting for it. You’ll have to watch and find out for yourself.”

Lind recalled filming in the dead of winter for the movie, which is supposed to be set in the middle of the hottest months. “We were shooting on Lake Piru in the wintertime. The movie is set in summer, so none of us really had any clothes on, and we were freezing our a**es off,” she shares. “My favorite memory was the scene when we arrive at the lake. There were probably 300 background actors in bikinis dancing around, and every time [director] McG called cut, we were all sprinting to get blankets and jackets on. Movie magic!” 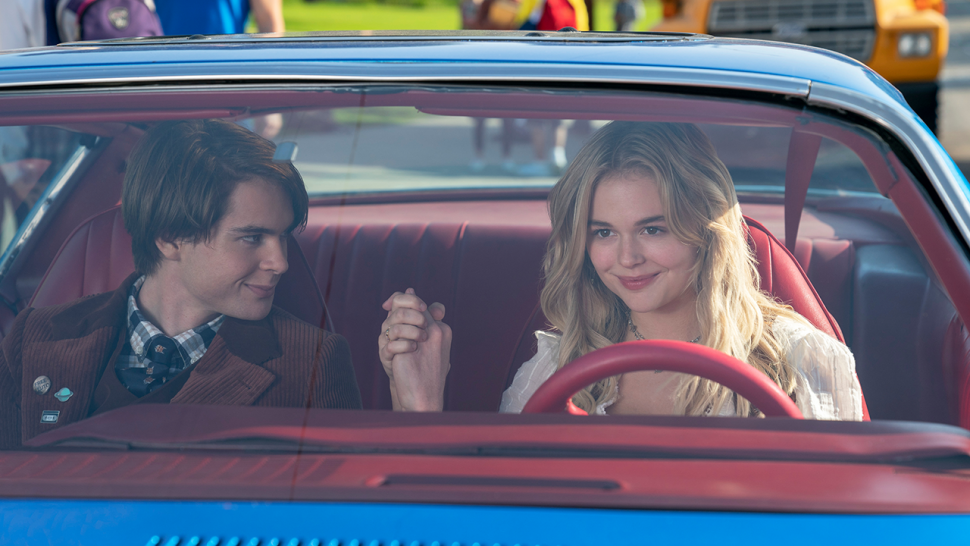 And Lind will be switching gears in a matter of weeks to begin production on the Gossip Girl reboot, which is set for an October start date in New York City. Set eight years after the original Gossip Girl site went dark, the actress will play Upper East Sider Audrey, who has been in a long-term relationship and is beginning to wonder what else is out there in the new series.

A fan of the original franchise (“I full out binge-watched that show”), Lind affirmed the secrecy surrounding the project, saying everything’s been “hush-hush.”

“I met with our casting director and I met with [showrunner] Josh [Safran] and they gave me a rundown of everything that’s going on. The way that they explained everything and the way that they talked about how it’s a family, it’s going to be a good time,” Lind teases. “It’s like we wouldn’t do this if we weren’t all in love with each other and so happy to go to work. They’ve done this before. The fact that they want to come back means that they were very happy with how the other show was. They’re ready to get back on the wagon and go again. So I’m really excited.”

“The characters are so intriguing. Josh is brilliant. All the creators of that show are involved in our reboot,” she adds. “They just have a way with creating characters that you want to watch, that you’re interested in and I’m excited to see what they do with this one.”

Lind said she’s most excited about having the new Gossip Girl “touch on specific subjects that are really relevant to today’s society” and “how we’re going to make sure that that is a relevant factor of the show.” Safran noted in a recent Twitter Q&A session that the “majority of the characters [are] diverse and/or queer.”

“As people that have platforms being on a show, you need to talk about things that people stigmatize or people think shouldn’t be talked about,” Lind says of her views of an actor’s duty. “I’m very into confronting situations head-on and saying, ‘Look, this is what we have to do.'”

Asked if Audrey is in line with her own personality, Lind opted to leave that as a mystery for now. “I wish I could say!” she quips. “Let me just say I’m already in love with her and I’m really excited for everyone to meet her.”

For a rising starlet, Lind has been a working actor for most of her life, beginning as a young child. That experience, she said, has made her mature faster than she’d anticipated.

“I didn’t have a very, I guess, normal childhood, but I wouldn’t have had it any other way. People always say I grew up really fast and I think that’s very true. I learned to be in adult environments really young, but the truth is I’m so grateful for everything that has happened to me and what I’ve been through,” Lind says. “And my parents are trying to keep my experiences as normal as it can be when you’re having Thanksgiving in some hotel room in Louisiana or in Atlanta, or you’re having Christmas in Tennessee because that’s where you’re filming.”

“If I didn’t have that or if I had the lifestyle of letting an industry take over my life in those aspects, I don’t think I would be a very happy, stable person right now, looking back at all that stuff,” she continues. “But it’s been a crazy ride. I feel like an 80-year-old saying, ‘It’s been crazy ride,’ but it’s all just starting.”

The Baby-Sitter: Killer Queen is streaming now on Netflix.

This article was completed from two separate interviews, one in May and the other in September.

To stay up to date on breaking TV news, sign up for ET’s daily newsletter.