Disney has reopened its Shanghai theme park with new physical distancing rules preventing Mickey Mouse from posing with customers, more than three months after the coronavirus pandemic forced it to close.

Visitors must wear face masks, undergo temperature checks on arrival and be given timed entry slots in a much changed theme park experience.

Tickets for the reopening on Monday went on sale on Friday and sold out within minutes. Visitor numbers are limited to 30% of the park’s 80,000 usual capacity. 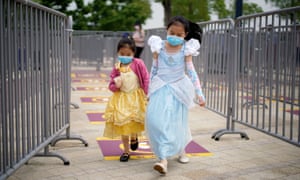 Only visitors with a green rating on China’s health QR code app will be allowed through the gates, further embedding the use of the digital passport-like documents that have allowed some Chinese citizens to move relatively freely, but which have restricted others.

Some facilities such as children’s play areas and theatre shows remain closed. No parades or night shows will run either.

“Close interaction and close-up photos with characters will be suspended during the initial phase of reopening,” Shanghai Disney Resort said in a statement.

Disney closed the Shanghai park on 24 January, before closing other theme parks across the world in March. However, the US entertainment company is eager to reopen facilities and try to make back lost revenues.

The Walt Disney Company’s net income fell by 91% in the first three months of the year compared with 2019, as the company revealed a $1.4bn (£1.1bn) cost from the pandemic.

The company was heavily exposed to the virus, which forced the cancellation of cruises and the closure of the cinemas playing its blockbuster films – although the timely launch of its new streaming service, Disney+, has cushioned some of the blow.

The group also scrapped its dividend, but it drew criticism from Bernie Sanders, the former US Democratic presidential candidate, and Abigail Disney, an heir to the Disney fortune, after it furloughed more than 100,000 employees to save money on salaries, despite retaining large rewards for its leaders.

Bob Iger, who moved from chief executive to executive chairman in February, gave up his salary for 2020, but could still receive millions of dollars in performance related incentive payments.