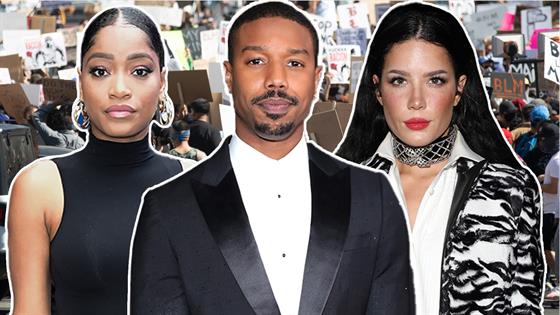 Dave Chappelle is returning to the stage and addressing George Floyd‘s death.

In a new Netflix special titled 8:46, the comedian appeared in Yellow Springs, Ohio in his first gig since the Coronavirus pandemic cancelled many shows.

But instead of cracking jokes, Dave provided some commentary on George’s death, which has resulted in protests around the world for close to two weeks. He began by describing his experience living through the Northridge, Calif., earthquake that was “absolutely terrifying.”

The Emmy winner continued, “People watched it. People filmed it. And for some reason, that I still don’t understand, all these f–king police had their hands in their pockets. Who are you talking to? What are you signifying that you can kneel on a man’s neck for eight minutes and 46 seconds and feel like you wouldn’t get the wrath of God? That’s what is happening right now.”

Three Minneapolis police officers were later charged with aiding and abetting murder. They remain in jail except for Thomas Lane who was released on bail Wednesday. “We are happy that he’s out,” his attorney told E! News. “It’s much easier to defend a client who’s out of jail. Now we can defend the case as we intended to.”

Another officer, who held his knee on George’s neck, was charged with second-degree murder. He remains in jail with bail set at $1.25 million and has yet to enter a plea. All four officers were fired.

While Dave said he didn’t mean to get “heavy” in his return to the stage, the comedian told the crowd that he had to say something. The audience would later clap in support of Dave.

“He told the police he couldn’t breathe. One of the hardest parts of the tape to listen to, he said ‘please.’ I can’t tell you. As a man watching another man go through something like that, what it makes you feel like,” Dave shared.  “I didn’t watch the tape for a week. But when I finally watched it, I understand nobody is going home. Anyone who sees this, well they are going to be furious.”

While the special can be watched in full on Netflix, many are also able to view the 27-minute special on YouTube. In less than one day, close to 2.5 million people have watched.

“Normally I wouldn’t show you something so unrefined, I hope you understand,” Dave wrote in a note posted on YouTube. “To find out more about how you can support the Equal Justice Initiative go here.”