Captain Tom Moore captured the hearts of the nation with his quest to raise £1,000 for NHS Charities by walking 100 laps of his garden before his 100th birthday. The 99-year-old war veteran has far exceeded his expectations, having already raised more than £26 million and has since joined forces with Michael Ball and the NHS Voices of Care Choir to cover the Gerry & The Pacemakers hit in a bid to raise even more money.

However, while Dan Walker and Louise Minchin discussed the war veteran’s efforts on BBC Breakfast today, Dan was forced to apologise after talking over Captain Tom and Michael singing.

“A little bit of an update on Captain Tom. After raising more than £26 million for the NHS by walking 100 laps of his garden, he is now on course for yet another really remarkable achievement.

“Remember last week,” Dan began but as footage of Captain Tom, Michael and NHS Voices of Care Choir started to play he apologised. 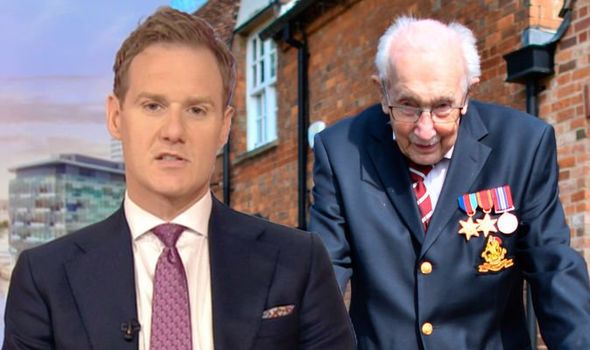