The filmmaking and acting team discuss their latest low-budget science fiction movie, “Something in the Dirt,” and their work on the Marvel Disney+ series “Moon Knight.” 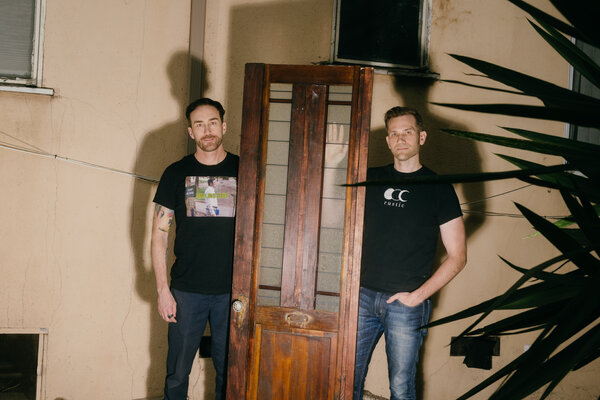 The writing-directing-acting duo Justin Benson and Aaron Moorhead’s latest film, the science fiction satire “Something in the Dirt,” follows John (Moorhead) and Levi (Benson), neighboring tenants in a ramshackle Los Angeles apartment complex. After observing inexplicable supernatural phenomena in Levi’s flat, they attempt to capture the event on camera for personal gain, but meet disaster instead.

Since releasing their feature debut, “Resolution” (2013), Benson and Moorhead have made movies their way, exercising full creative control over their malleable, genre-fluid aesthetic. Referred to in reviews as their “most personal” movie after its Sundance premiere, “Something in the Dirt” (in theaters) is a distillation of their sensibilities, striking a lopsided contrast with their directing contributions to the Marvel Disney+ series “Moon Knight,” an atypically weird superhero show involving dissociative identity disorder, Egyptian gods and Oscar Isaac.

In an interview via Zoom, the two discussed nuances in personal filmmaking, the line between virtue and villainy, and how directing for an entertainment giant crystallized their filmmaking identities. These are edited excerpts from the conversation.

“Something in the Dirt” is about two guys making a movie. Did the way that you make movies and collaborate wind up echoing in the story?

Justin Benson: What’s strange is our dynamic and our filmmaking process and our relationship couldn’t be more different than John and Levi’s. Obviously we’ve seen it described as “their most personal film.” There is probably some truth to that, but you’ve got to get into this oddly precise definition of “personal,” because it’s the farthest thing from autobiographical. The characters were intentionally constructed to be wildly different from who we are.

The popular franchise of superhero films and TV series continues to expand.

Aaron Moorhead: For the most part we were interested in these characters because we were exploring stuff we don’t believe. That’s not just in our films. That’s our free time, our conversations. The stuff that’s interesting feels a little dangerous. It’s on a razor’s edge of being mockable, but still can hold resonance in our minds and hearts.

Benson: The only similarity between Aaron and I and John and Levi is we spend a lot of time talking about science fiction. But that’s the point. The huge difference for us is that John and Levi are quick to believe, and we never believe in anything.

John and Levi trade stories with each other that either are not true or are dubious. It feels like there’s a bit of you in that dynamic. Was it gratifying to play that in this fictional, very fractured environment?

Benson: There’s a cut line from the movie — Levi accuses John of being a liar, and John says, “You lie more than anyone I’ve ever met!” They lie in different ways. Levi works at a bar and wants to put his best foot forward. He’s probably got half a dozen different stories, and once you run out of them, you end up with this sad, lonely soul. John lies for other reasons, but the way they lie was part of fleshing them out as real human beings.

Moorhead: We were dedicated to this idea of: you sympathize with one character and suspect the other is a villain, and then it slowly swaps through the movie, and by the end, you realize they’re both flawed human beings, neither villain nor hero. Neither of us ever believed the characters we were playing were bad people, but while we were performing, we believed in the virtue of what they were doing. There’s a part of me deep down that says it isn’t villainous if you’re virtuous, but you don’t know if you’re virtuous or not. You just hope you are.

Moorhead: It was part of the conception of this movie to examine your own relationship with pop culture and what you put out in the world. Sometimes lies enter the zeitgeist in a way you didn’t intend. What exactly is the responsibility of the person who’s creating these things whole cloth? It is terrifying as a filmmaker to think someone might actually believe that what you are showing them is real.

“Something in the Dirt” premiered at Sundance. “Moon Knight” premiered in March. This isn’t a knock against “Moon Knight,” but it comparatively feels impersonal because it’s a Marvel production. There’s a big leap from your movies “Spring” and “The Endless” to Marvel. Did that personal quality remain intact in that framework?

Moorhead: When we faced a decade of being completely unemployable, we walked into every single studio pitch room on every single project, pitched our hearts out and wouldn’t be able to make it happen. We now realize that was for the better, because our alternative was to make a personal independent film. That solidified in our own minds, but also in the minds of what you call the industry, what exactly we’re doing. Now, when people ask us if we want to do something, it’s in that niche — not broadly horror, broadly sci-fi. There’s mystery afoot, and something dark and cosmic about it.

It isn’t that we have to erase our personality and work within the machine. What [Marvel] wanted from us was our voice. It comes out mostly in the visuals, because scripts are separate from direction, but we put a lot of ourselves into it. But your thesis is definitely correct. There’s by definition nothing more personal than an independent film.

Benson: [“Moon Knight”] has given us opportunities to work with collaborators we wouldn’t otherwise, which has expanded our creative worlds. These opportunities have also given us time on set in a compressed period that’s been like a second film school in some ways — though being a filmmaker is continuously being in film school, because every day is never planned for, really.

Moorhead: The greatest terror we both hold is losing our curiosity and ability to grow. It can happen, and it can sneak up on you. If you only ever make your own films, you might start to repeat yourself because you think you’ve got a bunch of great ideas, but they’re all the same idea. We only want to make stuff that expresses ourselves purely. Right now, doing something big and doing something indie, they feed each other very nicely.