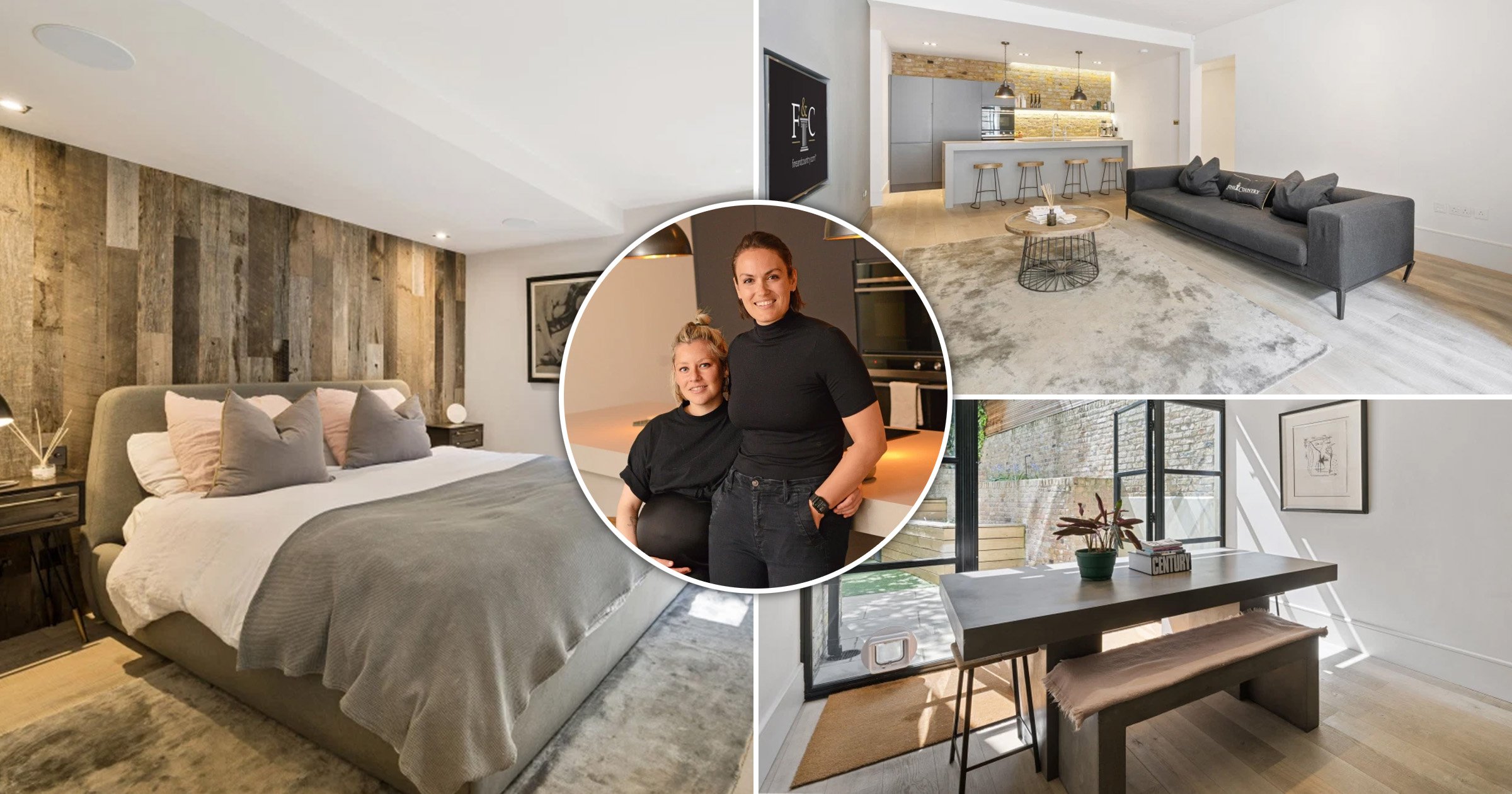 Beauty, as the adage goes, is in the eye of the beholder.

This was certainly true for Jess Archer and her partner, Jen Sinclair, when they viewed an unloved lower-ground floor flat on Regent’s Park Road, in Primrose Hill, three years ago.

The two-bedroom north London pad, forming part of a period terraced house opposite London Zoo – and at the time one of the most dilapidated houses on the block – had barely been touched for 40 years.

Its interior walls were sagging, its carpets were sodden, a stale and mouldy scent filled the air and its unkempt rear garden was blocking out the light.

‘We had been living in Maida Vale, but used to visit Primrose Hill every weekend with our dog,’ says Jess, an innovation consultant and founder of savvyphnx.com, who is originally from Wales.

‘For us, the area had the perfect balance of community and creativity. We must have viewed at least 50 properties in Primrose Hill over a two-year period, but when we saw this flat, we made an offer straight away. It was in a terrible condition, but we could see past that.

‘The size of the property, its high ceilings, the south-facing garden, the fact it had its own front entrance and its proximity to Regent’s Park meant it was The One.’

With a renovation budget of around £700,000, the couple went on to completely transform the property, over a period of about nine months. First off, the façade needed some urgent attention.

Forming part of a chichi enclave well known for its celebrity residents – in the 1990s it was party central for the original Primrose Hill set, Jude Law, Sadie Frost, Noel Gallagher and Kate Moss, and more latterly to younger stars Matt Smith and Lily Collins – the building’s deleterious front was letting the neighbourhood down.

‘When we bought the flat, kerb appeal was non-existent,’ Jen says. ‘The building was one of the worst kept on the street, and the paintwork hadn’t been touched for years, if not decades.

‘There was an overgrown tree in danger of breaking up the pavement, and some pretty unattractive tiles leading down to the front entrance, which was clad in security bars.’

With the agreement of the residents of the other four flats in the building, they swapped the exterior’s peeling blue paint for an authentic Regency pale yellow – Farrow & Ball’s sunny Dayroom Yellow – laid swish new Yorkstone stairs down to the flat, inset with spotlights, and repositioned their private front door.

‘We also managed to save the tree, which we had been told was a real danger,’ Jess says. ‘We managed to find a tree surgeon to salvage it – preserving one of the oldest residents of Regent’s Park Road!’

To the rear of the home, they excavated the garden, allowing light to flood the flat through steel-framed, industrial-style Crittall windows, and also revolutionised the internal floor plan, creating an extended master suite out of what were three awkward rooms, and making an open-plan kitchen and living space a focus for home life and entertaining.

‘It was a huge job,’ recalls Scotland-born Jen, who gave birth to her and Jess’s first child, a baby girl, earlier this month.

‘When the builders first started, they lifted the floor to find barely any foundations and an awful lot of damp. They had to relay the foundations through the whole flat.’

The entire scheme was minutely thought through by Jess and Jen, who created finely detailed Pinterest boards for each room. ‘We planned the look and style down to every plug socket and light fitting,’ says Jess.

Underfloor heating was laid beneath the Havwoods engineered timber that now features throughout most of the 1,414sq ft flat, and the walls were painted in a Farrow & Ball colour scheme taking in Dimity, Skimming Stone and Down Pipe.

A Sonos wireless sound system was installed in four zones, and Vola taps, in classic Scandinavian designs, were used in the bathrooms, along with the sinuously curved Rho Kast concrete basin in the master bathroom.

The fact this is Jess and Jen’s first renovation project makes the flat’s slick, seamless look all the more remarkable, and despite sharing the space with three dogs and four cats, all rescue animals, they have managed to keep the home immaculate.

They admit they had plenty of guidance from their brilliant architect, Gordon Leney, and relatives who work in the building industry. They also admit there were hiccups along the way.

Choosing to rent elsewhere while works were underway, they arrived on one of their many project check-ups to find the wrong kitchen being installed. The bespoke Greenmark kitchen they had ordered had been delivered in jet black, not the grey they had chosen.

It was immediately dismantled, and today the kitchen is exactly as they had envisaged, with a pair of Brooklyn Dome pewter and brass pendant lights from Industville illuminating the island, at which a quartet of curved Loko bar stools from Nkuku, crafted from sustainable mango wood, sit.

The hand-made grey Churriana Bert & May tiles they had fallen in love with to line the master suite shower had also been laid out in the wrong pattern.

‘They just wouldn’t have had the same dramatic effect, so those had to come off and be relaid,’ Jen says.

Once the practicalities were covered, the couple could turn to hanging their highly personal art collection. In the hallway, a pair of huge floor-to-ceiling abstract paintings by Welsh artist Neale Howells stand out.

Poignantly, a little sketch of Jen’s late father, by a Glasgow artist, and commissioned by her mum, is on display in the kitchen. ‘I love seeing the image of him every day,’ she says.

With a new baby, and the need for a home office, the pair have reluctantly decided to sell up, and have put the flat on the market for £1.95million.

‘It was very much designed as a family home, not just to be flipped,’ Jess says. ‘In a dream world, our home would be exactly this, just a bit bigger.’

They will miss the way the afternoon light comes through the Crittall windows, casting shadows in their dining space – at the cement table where they have spent many happy hours brainstorming ideas for Phnx House (@phnx_house), a new enterprise, explains Jess, that will ‘uplift the community by hosting sustainable fashion events across London, while amplifying the voices of marginalised queer artists.’

They will also miss hearing the roar of the lions from the zoo opposite.

The couple are open to where they live next, Jen says. ‘We may move further out, to the edge of London, and are even considering Glasgow, Cardiff or Amsterdam.’

What they do know is that they have got the renovation bug. ‘We will definitely be doing another project again,’ she says. ‘It’s all about finding the properties with potential. We can set up our family anywhere.’