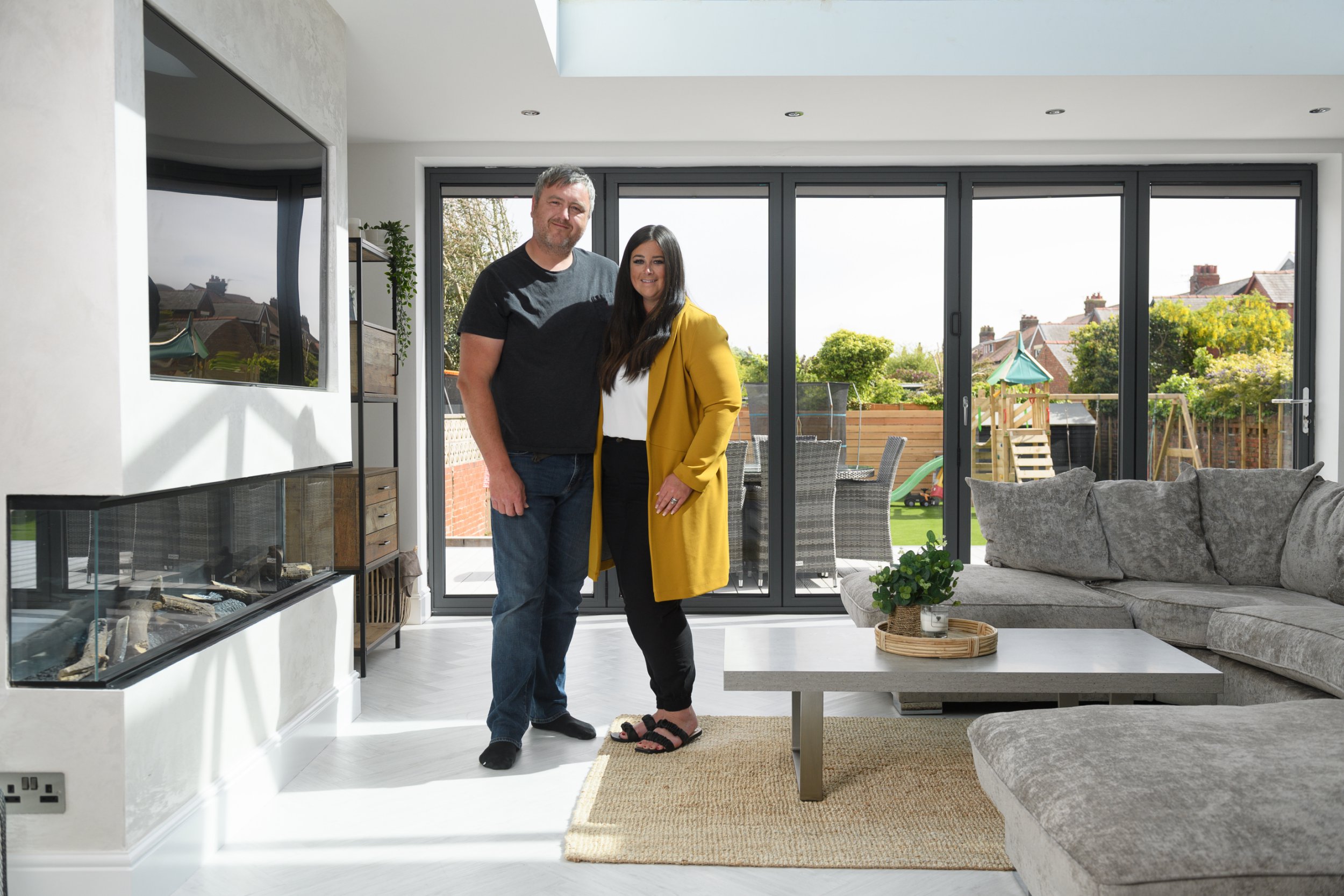 Whether it is becoming besties with the local Lamborghini dealer or jetting off to the Caribbean for lunch, winning the lottery would have most of us channelling our inner Kim Kardashian.

But for Natalie and Andrew Cunliffe, scooping one million pounds on a scratch card sparked a bout of level-headedness that is enough to burst all of our lottery fantasies.

Rather than blow the lot in a supermarket sweep at Harrods, the couple decided to renovate a dilapidated property that had been used by squatters and turn it into their dream forever home – undertaking much of the work themselves to make sure it was the best value possible.

‘I was at work and went to get some tea at the Asda in Hindley and saw a scratchcard,’ says Andrew.

‘It kept going round my head that I’d won and I didn’t know what to do so I read the back of the card — I’m pretty sure no one had ever read the back until they win.’

Natalie continues: ‘I was at a play centre with my daughter and got a phone call from Andrew saying can you get home immediately. I thought he’d lost his job.

‘[When I got home] he said that I should sit down, and he passed me this scratchcard. But I couldn’t work it out — he had to tell me how much it was worth.’

Then the sensible bit kicked in. Everyone dreams of winning the lottery, and what they’d splash out on, but, as Natalie explains, that trip to the supercar dealership was put on hold.

‘There is always that conversation as to what you would do before you win,’ she says.

‘But when you do it’s a different conversation. It’s a million pounds but you have to make that work as a family and also in the future. You could easily blow it.’

While finishing the semi-detached home they were living in, Natalie would always pass a near-derelict 1930s house while on the school run in Blackpool. It was overgrown and uncared for.

It had been sitting empty for months and even when she tried to make enquiries they led nowhere. Then one day a ‘for sale’ sign popped up outside.

‘I didn’t want to move away from the area as we are two minutes from the beach. Every day I’d see this neglected house and I couldn’t stop looking at it.

‘After I saw a ‘for sale’ sign, just 24 hours later we were standing at an open house viewing with 20 or 30 other people. Squatters had got into the house and there were random shoes and mattresses around — it wasn’t in a terrible state but not particularly safe.

‘But we viewed it and fell in love with the house — we could see the potential from the minute we set foot inside — light flooded in and we loved the original features, so we couldn’t wait to bring it all back to life.’

The couple told the estate agent straight away they were interested and made a sealed bid.

Ten days later, while they were on holiday, the offer was accepted.

To begin with the property needed to be completely reconfigured during the 13-month renovation.

A confusing layout, including a staircase that went in two different directions, meant that it wasn’t suited for modern family life.

A new staircase was fitted to maximise space upstairs and the guest bedroom was extended and master en suite created. There is also now an en suite for all four bedrooms in the property.

Downstairs much of the rear of the house was removed, as was an unnecessarily large garage, and a huge living space created that incorporates diner, kitchen and a family room.

While Natalie took charge of the interior design and Andrew did much of the renovation work himself, the kitchen was one place they splashed out, bringing in Christopher Beardwood kitchens to create a bespoke high-end design.

The appliances are Siemens while the cabinets are made from a single piece of laminate with the grain running across the different doors. The kitchen island was originally going to be at 90 degrees but at the last minute was turned to create a more usable space and is topped with a 2.8metre long piece of quartz.

The pendants are Iconic Lights and the chairs, made from real leather, are from Dunelm — introducing a welcome organic colour and texture to the modern industrial design.

The house, with its exposed brick frontage and original stained-glass porthole windows, stills retains its period charm, which Natalie was keen to emphasise.

‘I wanted to put character back into the house. We are not ultra modern but it is contemporary. Splashes of colour give it a pop,’ she says.

‘My best advice is: live in a place for a while and work out what it needs, then make decisions. One of the rooms I must have changed the colour ten times to get it right.’

Using Instagram and Pinterest for inspiration, as well as minimalist Mediterranean interiors they had seen on holiday in Greece, Natalie used mainly grey throughout the property for a cool contemporary look.

Flourishes such as the gold mermaid fishscale tiles upstairs — given to her by someone on Instagram — add shots of luxury to the otherwise pared-back overall look.

With two children it had to be liveable so not only do the interiors have subtle sophistication, they are rugged, too. The huge media centre in the living area was made by Andrew himself and features a DIY marble-like paint finish that is hard wearing and ideal for sticky finger marks.

‘You have to get in touch with your inner kid,’ says Andrew explaining the mucky process of putting the paint on. Built in to the media centre is a fireplace and Luvento flooring runs from front door to rear room, through the dining room and kitchen.

The downstairs bathroom also features similar mermaid tiles and a hexagonal mirror that was a moving in gift from grandma.

The dining room has the same panelling — created by Andrew — as the living area and an Arighi Bianchi table and chairs set. ‘I like an industrial feel,’ says Natalie, ‘but something that will still work with different accessories over the years.’

‘We like the outdoor- indoor feel and the kids are never indoors anyway,’ she adds.

Upstairs in the master en suite is a freestanding bath from Victorian Plumbing and huge concrete tiles from a local tile merchant.

She adds: ‘When we finally moved in last year, it was the most amazing feeling. We’ve poured our heart and soul into this house and it really is our dream home. For us, it’s everything we have always wanted.

‘We would recommend a renovation project to anyone – it’s a lot of time and effort, and some tears, but it’s all well worth it in the end.’