In the forthcoming drama “The United States vs. Billie Holiday,” Parks, who wrote the screenplay, really gets into it, placing many of Holiday’s better-known battles — with heroin addiction, Jim Crow-era racism, and a seemingly endless string of swindlers and cads — in the context of her lesser-known struggles with Harry J. Anslinger, the unabashedly racist head of the now-defunct Federal Bureau of Narcotics.

“The story is about how this woman, this icon, was much too outspoken, and so the government came after her,” Parks said in a phone interview. “It’s about how we African-American folks love this country that doesn’t really love us back.”

Directed by Lee Daniels, the film reveals how Anslinger doggedly pursued Holiday (played by the Grammy-nominated vocalist Andra Day) ostensibly for her drug use, but really because she refused to stop singing “Strange Fruit,” the haunting and visceral anti-lynching anthem that has become one of the most famous protest songs of all time.

The role, Day admitted, was daunting. Holiday was one of the world’s most gifted and celebrated jazz singers, her songs later covered by artists like John Coltrane, Barbra Streisand and Nina Simone, her influence felt by singers from Frank Sinatra to Cassandra Wilson to Day herself. And then there were all the others who had tackled the role before her. “I just had this idea running in my head that people would be like: ‘Billie Holiday’s so amazing, Diana Ross was amazing, Audra McDonald was amazing,’” Day said in a video call. “‘Oh, and then remember that girl, Andra Day, who tried to play Billie?’” 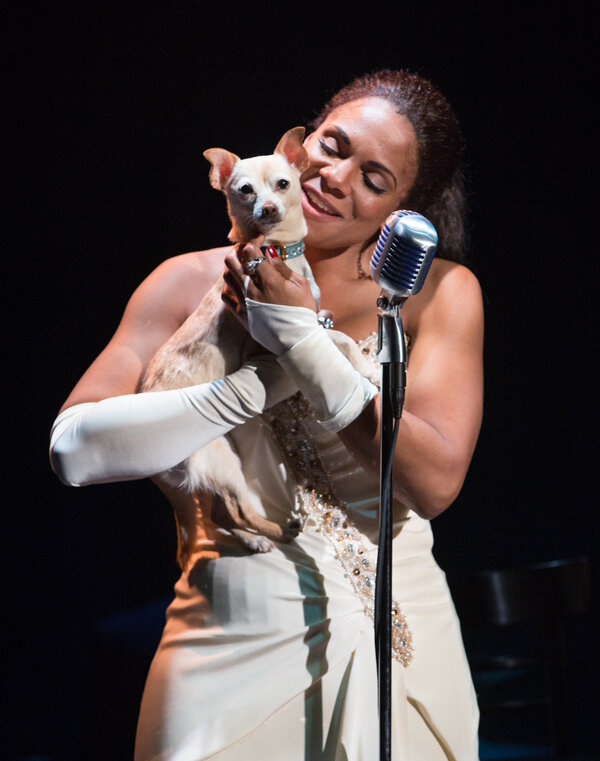 Premiering on Hulu on Feb. 26, the biopic is the latest in a series of portrayals of Lady Day and her music that date back decades. Day’s Golden Globe-nominated performance follows Ross’s star turn in the 1972 feature “Lady Sings the Blues” and McDonald’s Tony-winning performances in the Broadway musical “Lady Day at Emerson’s Bar & Grill.” In addition, there have been biographies (“Billie Holiday: Wishing on the Moon”), children’s books (“Mister and Lady Day: Billie Holiday and the Dog Who Loved Her”), and documentaries (“The Long Night of Lady Day”; “Billie”). Over the years, portrayals of Holiday have become more nuanced, shifting focus away from her problems with addiction to include insights into her history and legacy as a musician, a pioneering Black female entertainer and, with “Strange Fruit,” a champion of civil rights.

Looming over them all is “Lady Sings the Blues,” Holiday’s 1956 ghostwritten autobiography, which omitted many details of her life (the singer’s affairs with Orson Welles and Tallulah Bankhead) and fictionalized others (her place of birth; the marital status of her parents).

The book formed the basis for the 1972 biopic, a film that, coincidentally, inspired Daniels to become a director. (His credits include “The Butler” and “Precious.”) “‘Lady Sings the Blues’ changed my life,” he said in a phone interview. “It was beautiful Black people. It was Diana Ross at the height of her everything. It was Black excellence mixed in with a little bit of pig’s feet and pineapple soda and cornbread. It was magic. I had never been so entranced by anything.”

The musical “Lady Day at Emerson’s Bar and Grill” imagines a single set — but what a set! — during which the singer goes off the rails in a small nightspot in Philadelphia, the site of her previous arrest on drug charges. (“When I die,” she cracks, “I don’t care if I go to heaven or hell, as long as it ain’t in Philly.”) Holiday rails against the bad men in her life, including her first husband, Jimmy Monroe, and the anonymous attacker who raped her when she was a child.

Since that musical’s premiere in 1986, a host of would-be Lady Days have tackled the demanding role in theaters across the country, including Lonette McKee and Ernestine Jackson. In 2014, McDonald’s rendition won the actress a record-breaking sixth Tony.

To bring the icon to life in “The United States vs. Billie Holiday,” Parks read everything she could about the singer and immersed herself in her music. She reread “Lady Sings the Blues” but didn’t revisit the movie. (“Lee loves that film, so I was like, I’m going to let him have that.”) She also read several books by Anslinger, Holiday’s longtime nemesis (played by Garrett Hedlund in the film), who declared that jazz “sounded like the jungle in the dead of night” and declared that the lives of its players “reek of filth.”

“Anslinger was fascinated with what he called the ‘jazz type,’ and saw himself as making America great again,” Parks said.

Parks also studied up on Jimmy Fletcher, the Black narcotics agent whom Anslinger enlisted to help bring Holiday down. “That’s the situation we’re in as Black America right now,” Parks said. “Want to prove you’re not really Black? Put down some Black people. That’s the way to climb the ladder in the entertainment business. I’m not going to name any names! But you still see it.”

In addition to Fletcher and Anslinger, a whole roster of bad men enter Holiday’s life, including the mob enforcer Louis McKay, the singer’s third husband. In the 1972 “Lady Sings the Blues,” McKay, as played by Billy Dee Williams, is Holiday’s super-suave, would-be savior, who struggles mightily (and fails) to get the singer off drugs. (The real McKay served as that movie’s technical adviser.) In reality — and in Daniels’s film — McKay was a pimp, a junkie and a wife beater.

“The same woman who was so strong, who could see so clearly the injustices in our culture, just kept hooking up with the wrong guy,” Parks said. “But I guess that’s how it always is. Great people do great things, but then at home, they’re like —” and here the writer screamed.

Even so, the singer who emerges in “The United States vs. Billie Holiday” is more fighter than victim, taking on Anslinger (near the end of the film, she tells him, “Your grandkids are going to be singing ‘Strange Fruit’”) and holding her own against Fletcher.

“You get to see her as human,” Day said. “As Black women, we’re not supposed to show the ugly parts or the mistakes. Billie’s funny, she has this great magnetism, she can be crazy and self-destructive. But she can also stand up and be a pillar of strength when forces that are so much greater than her are trying to destroy her.”

James Erskine, the director of the recent documentary “Billie,” also wanted to move beyond the standard narratives of Holiday as victim. “I was really keen to show that she lived life,” he said. “There’s a sequence where she’s on 42nd Street and she’s having lots of sex and taking lots of drugs, and I really wanted that to feel very positive, that she was determining her own destiny.”

Erskine’s film drew from 200 hours of audio interviews conducted by the journalist Linda Lipnack Kuehl in the 1970s. Many of the comments haven’t aged well: One psychiatrist declares Holiday a psychopath; others attribute her beatings by assorted men to masochism.

The documentary also includes commentary about Holiday’s deep and platonic love for the saxophonist Lester Young, her unfulfilled desire to have children, and her sold-out 1948 concert at Carnegie Hall, following her stint in a federal prison in West Virginia.

“The perception from ‘Lady Sings the Blues’ is very much Billie as victim and junkie, but I think that while she was victimized by people, she was really a fighter,” Erskine said. “And she was also a great artist, of course, which is why we’re still talking about her long after she died.”

For Daniels, Holiday’s story will always be relevant. “It’s America’s story,” he said. “And until we’re healing, until American has healed, it’s not going to not be relevant.”

In Parks’s view, “She was a soldier. Just the fact that she kept singing ‘Strange Fruit’! She was a soldier of the first order. Those mink coats and diamonds that she wore were her armor, and her voice was her sword.”