Warning: This post contains spoilers for Batwoman’s Season 2 finale. Read at your own risk.

The episode kicks off with Black Mask hijacking everyone’s TV to deliver an impassioned speech in the hopes of inciting a riotous mob that will overthrow the government. His demand for anarchy is accompanied by a city-wide blackout, leaving the Bat Team without their trusted technology and relying on old-school tools like walkie-talkies.

Filled with doubt about her ability to defeat Circe without the Bat Suit, Ryan writes a letter of resignation as Batwoman.

Meanwhile, Black Mask is working on building a super army. If all goes to plan, Gotham police will implode and stir fear around the city, leaving an opportunity for Roman Sionis to emerge as their hero and kill the person he paid to pretend to be Black Mask. He tests his super serum on Russell Tavaroff, the man who shot Luke, and seemingly fails. Tavaroff flatlines and they discard his body.

Luke raids his father’s old workshop and stumbles across the drawings he made in which he envisioned a Black Batwoman. When he discovers a new suit, he realizes his father made those dreams a reality. 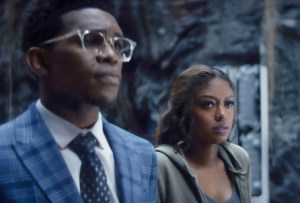 Ryan doesn’t think she can beat Circe on her own, so she recruits Alice to help take her down. Their brutal fight with Circe is interrupted by Black Mask, who opens fire. Alice stays behind while Ryan goes after Circe. In a one-on-one conversation, Black Mask reveals why she’s such a bad villain: She has too many feelings. But Alice isn’t impressed with his analysis. “You know who’s a great villain? The Joker,” she tells him before spraying him with snake bite and escaping.

At the clinic, Mary is overwhelmed by an influx of patients due to the chaos around the city. She finds Tavaroff still alive and discovers that he’s been injected with a special snake bite mixture that has made him super strong. Awake and raging from the serum, he chases Mary to the roof and knocks her over the edge. But she’s caught in mid-air by Luke… who’s dressed as Batwing! At long last, he suits up as the Bat Team’s newest hero.

Ryan squares off against Circe with restored hope after seeing a flood of Bat-Signals from citizens showing their support for Batwoman. When Circe calls her Ryan, the eponymous hero quickly corrects her: “Call me Batwoman.”

Alice rejoins the fight and during a scuffle with her sister, they both fall over the bridge and into the river. While unconscious in the water, Alice dreams of Ocean and gets her chance to say goodbye — even if it isn’t real. She then lovingly strokes Circe’s cheek, which unlocks the real Kate Kane. Finally. After pulling her unconscious sister onto the bank, Alice and Ryan try to revive Kate. It takes some time, but Kate finally opens her eyes and calls for Beth. Their touching moment is short-lived, though, because Gotham police arrive and immediately arrest Alice for her numerous crimes over the years.

At her parole hearing, Ryan makes a strong case for herself — a woman who no longer sees herself as a criminal the way that they do. She’s stepping into her power and owning it. The moving speech convinces the board to lift all provisions. Ryan’s officially off parole!

The mood is celebratory at the loft. Luke and Mary are relieved to have their friend back, and Kate makes it clear she cannot help Alice until she’s ready to be Beth again. She then requests a chat with Ryan, Batwoman to Batwoman. Ryan thanks Kate for the opportunity to don the suit because it changed her life. Kate, reminding her that they suited up for very different reasons, tells Ryan that Batwoman is hers. She’s got other plans. 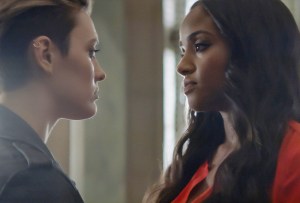 In a passionate goodbye with Sophie, we learn exactly what those plans are. She’s leaving town to visit her father Jacob (who was arrested and was granted a transfer) and a “friend” in National City. (That friend is Kara Danvers, right?)

At the Batcave, Ryan has a great idea for the community center: They can build it above Mary’s clinic. Plus, they still need to track down the case of Batman trophies that were stolen. But before they can jump into action, Ryan has one more loose end to tie up.

She visits Alice, who’s under tight security in prison. To her, seeing Alice behind bars is justice for her mother. Ryan ends their tense conversation by saying she hopes they never see each other again. But before she leaves, Alice drops a bombshell: Ryan’s biological mother didn’t die during childbirth and is still very much alive.

In one final scene at the river, we see a top hat and a black-and-white umbrella floating in the water, followed by a series of roots rapidly growing. Does this mean the Penguin and Poison Ivy are headed to Gotham? After all, Safiyah did reveal that Ivy helped her create the Desert Rose right before she was killed.

What did you think of those reveals? Are you ready for new villains in Season 3? Grade the finale below and let us know your thoughts in the comments.