A Place in the Sun: Couple reveal that they met at work

Channel 4 viewers got another chance to see if A Place in the Sun property expert Danni Menzies could work her magic to find couple Darrell and Jo their dream holiday home in Menorca, Spain. With £300,000 to play with, the pair were looking for the ideal and spacious place they could enjoy the sunny climate from as well as have plenty of space to welcome their families over. However, delving into the backstory of the loved up couple’s relationship, Danni was caught off-guard when she discovered how they first met.

The moment came as Danni showed Darrell and Jo around the second property she had up her sleeve in the sun-soaked location.

Danni had already gotten off to a fabulous start with her first property, a three-bed apartment in a complex only a “stone’s throw” from the beach.

The only thing Danni could improve on following the first option was to find a villa rather than apartment, according to Darrell.

And she did just that with the second property to show, a three-bed villa priced at £218,000 a little further from the sea. 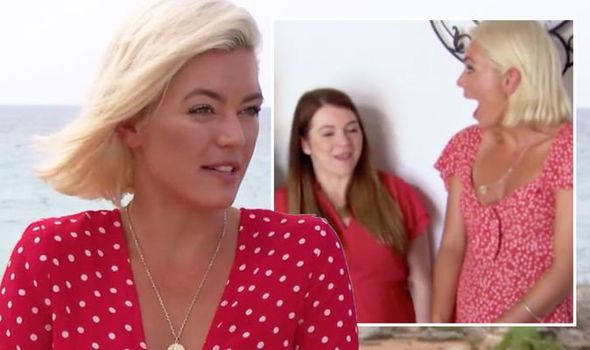 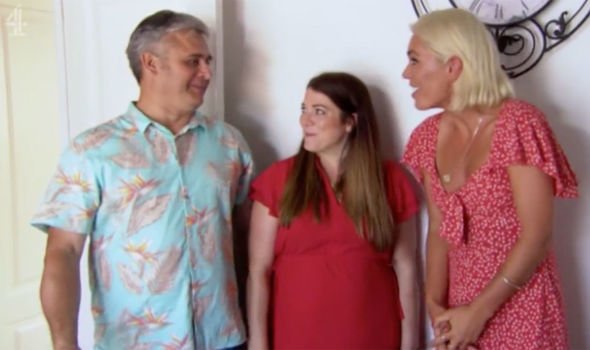 “I’m excited by this property,” Jo said right away and she and Darrell joined Danni at the villa’s front door.

However, there was a bit of road noise which appeared to irk Darrell, but it didn’t stop the pair from perusing around the interior.

But while the pair had a look around, Danni was keen to learn more about the couple she was showing around the Spanish location.

“How long have you guys been together?” Danni asked as the trio entered one of the three bedrooms in property number two. 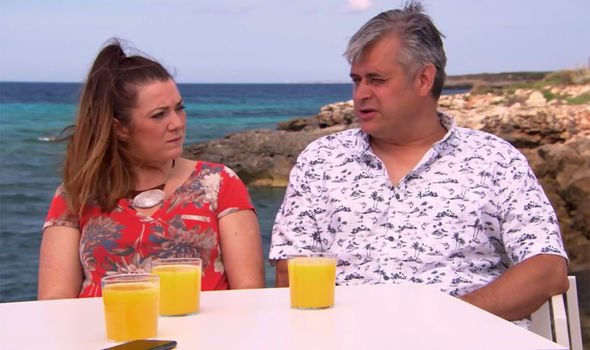 “We’ve been together eight years,” Jo answered, prompting Danni to probe further: “Eight years, how did you meet?”

“Darrell was actually my boss,” Jo replied, prompting a stunned reaction from the Channel 4 host.

“Was he?!” an open-mouthed Danni asked before the pair delved deeper into the beginnings of their romance.

“Was it love at first sight?” Danni asked, to which Jo said: “I was actually quite scared of Darrell when I first met him.”

Again shocked at Jo’s retort, a gobsmacked Danni questioned: “How can you be scared of Darrell?!”

But Jo explained: “He had this huge laugh and you could hear him as soon as he came into the building,

“On the ground floor (you could hear) this booming laugh and booming voice, and I though, ‘Oh, my goodness.’”

Jo concluded: “But I soon got to know him and it was fine,” with Danni adding: “He’s not very scary now.”

The trio shared a laugh as they continued the search, but sadly property number two wasn’t to be a contender.

The third option was situated a 15-minute drive from the beach and was on the market for £285,000 – but Jo and Darrell still out the three-bed, two-bath house as a contender.

Property four was “a curveball” in North Menorca for £302,000 but, despite appearing to tick all the pair’s boxes, they decided against it.

The villa shown as the fifth option along with property number one were the only two contenders following the search.

In the end, Jo and Darrell secured the apartment shown at the beginning of the search for £20,000 under the asking price.

A Place in the Sun continues weekdays at 3pm on Channel 4.