Facebook has banned the sharing or viewing of our news articles on its platform. For independent journalism straight from the source, download our app and sign up to our newsletters.

On Monday, Allen and Soon-Yi released a joint statement via Allen’s sister, Letty Aronson, slamming the four-part investigative series as a “shoddy hit piece” and a “hatchet job riddled with falsehoods.” 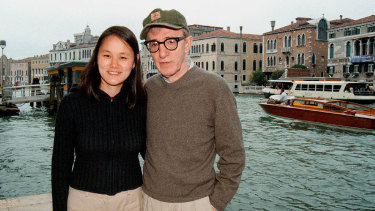 Woody Allen pictured with wife Soon-Yi in Italy in 2001. Credit:AP

The buzzy project, which airs on Foxtel and Foxtel on Demand in Australia, features disturbing allegations from now-35-year-old Dylan Farrow, and also scrutinises Allen’s relationship with Soon-Yi, which began when Allen was 57 and she was 21.

Soon-Yi is the adopted daughter of actress Mia Farrow and composer André Previn, whom Farrow married before dating Allen.

“These documentarians had no interest in the truth. Instead, they spent years surreptitiously collaborating with the Farrows and their enablers to put together a hatchet job riddled with falsehoods. Woody and Soon-Yi were approached less than two months ago and given only a matter of days ‘to respond’. Of course, they declined to do so,” Allen and Soon-Yi said in their statement. 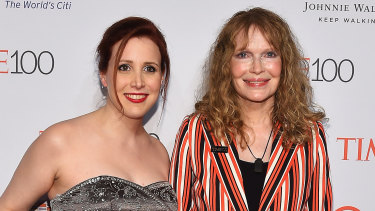 Dylan and Mia Farrow in New York in 2016. Credit:Getty

Directed by veteran documentarians Kirby Dick and Amy Ziering, the first episode of Allen v. Farrow debuted Monday AEST and includes interviews with Dylan Farrow, who said she was groomed and sexually abused by Allen as a young child. In 1993, Allen lost custody of Farrow after an appellate court ruled that “the testimony given at trial suggests the abuse did occur”.

The docuseries also features Mia Farrow, who recounts the day she allegedly discovered pornographic photos of Soon-Yi in Allen’s apartment. Despite the Farrows’ allegations and Allen’s controversial relationship with Soon-Yi, the director’s films have continued to attract accolades and high-profile talent over the years.

“I told the truth to the authorities then, and I have been telling it, unaltered, for more than 20 years,” Dylan Farrow wrote in a 2017 op-ed for The Times.

“Allen’s pattern of inappropriate behaviour – putting his thumb in my mouth, climbing into bed with me in his underwear, constant grooming and touching – was witnessed by friends and family members,” Farrow added. “It is a testament to Allen’s public relations team and his lawyers that few know these simple facts. It also speaks to the forces that have historically protected men like Allen: the money and power deployed to make the simple complicated, to massage the story.”