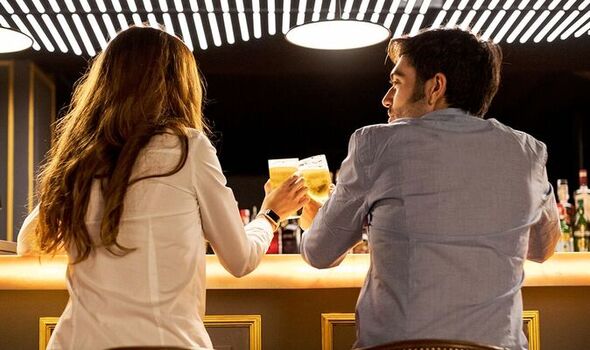 A Mumsnet user revealed a disastrous date she had when the man opposite her ordered a drink most adults don’t consume regularly, let alone with their dinner. She asked other users if she was alone with her judgment and wanted to hear their opinions on the matter.

She kicked off the thread with: “Went on a first date with a guy I met online last night, went out for dinner.

“When I got there I definitely found him attractive. However when it came to ordering drinks he ordered himself a glass of milk.

“I’ve honestly never came across someone doing that in a restaurant and I just think it’s really odd and really put me off him.

“I have tried to work out why this was such a turn off and I can’t come up with a reason it just made me feel a bit yuck,” she added. “AIBU? It’s just so odd on a first date I feel.”

Someone replied: “It’s childlike. Would put me off too.” Another said: “Reference to Edmund in Hunderby. Was there any reason eg for diet? Otherwise and even so, it’s a bit weird and not nice on a date. What other weirdness happens at home?!”

One joked: “More like something you’d give a child to have with an apple. Watch out for him being a secret adult nappy wearer.”

Another comment read: “Maybe with curry it isn’t that odd, equally burger and milkshake is acceptable so milk isn’t a massive step if he doesn’t like the texture of a thick milkshake. Fancy restaurant having steak or pasta then milk is a bit weird!”

Some did jump to the man’s defence: “Maybe he just prefers milk. I do too when at home, never ordered it with a meal so get why you might think it’s odd but not the worst thing someone could do.

“It’s only milk, he didn’t order a pint of blood.”

Another added: “Maybe he had heartburn. It works really well. Or maybe a sore throat. Or maybe he just fancied milk.”

Another lady wanted some help identifying “red flags” with the man she was dating.

She explained: “Just started chatting to this guy the last few days, my intuition and gut is telling me somethings not right, but I can’t articulate why, here’s the most recent message I’ve just received.

“Would this be classed as love bombing or future faking – for context we’ve not spoken verbally, video, this is literally just a few messages in.”

She was referring to a message she was sent where the guy listed the qualities he wanted in a partner: “I think we are looking for the same things but I don’t want to be hurt anymore and I’m really looking for a nice, loyal, humble, honest, kind, caring, honest and trustworthy woman if you can be.

“I need a woman I can wake up in the morning and tell her that [she] is the most beautiful woman in the whole world…let her know that she own the key to my heart…but I believe am gonna meet that special woman, that mean a lot to me and I hope is you.”

The thread gained hundreds of comments, many agreeing to the conversation showing red flags.

“Urgh. I don’t like that at all. Wish list. That all seems a bit heavy and too much. Would put me right off,” someone said.

Another added: “Urgh. He wants a humble woman. Yuck. That screams he wants you to remember he’s boss.”

“Ugh that made me cringe! Way too intense, if he’s like this after a few messages, imagine what he’d be like in a relationship! What struck me is that he has this ideal of what the perfect woman looks like. If you don’t meet up, he’ll be constantly criticising your behaviour and expecting you to change,” a third added.

One wrote: “That is weird. He uses the word ‘honesty’ twice and also ‘trustworthy’, all in one text. And ‘humble’…..He sounds insecure with trust issues and like he’d be checking up on you.”