After pubs across the UK shut up shop, many people have been indulging in their favourite tipple at home to ease the stress of lockdown.

But one single mother has questioned if her drinking is danger of veering out of control, after taking to British parenting site Mumsnet where she revealed she’s started drinking a bottle of wine five or six nights a week.

The woman explained that as a single mother she looks forward to a few hours to herself, where she can indulge in a bottle of wine, adding that she’s only adopted the habit since lockdown, and previously would stick with tea and chocolate.

Although she doesn’t get drunk or have a hangover, she’s wary of it to becoming a long term habit, and many commenters warned that she’s drinking too much according to NHS guidelines.

Others were more sympathetic, suggesting that it’s ‘easily done’, while some were more relaxed and claimed it wasn’t that bad. 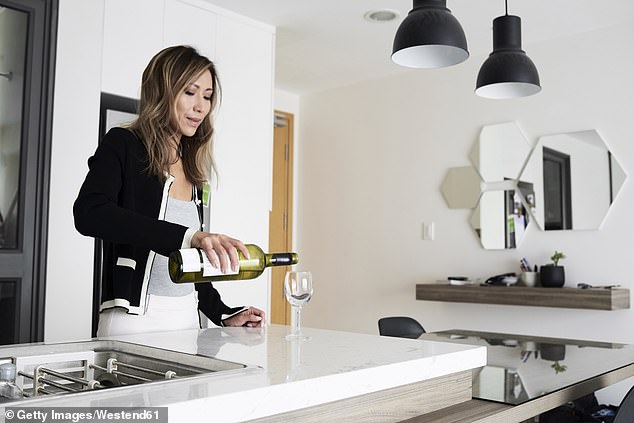 A British mother who has been drinking a bottle of wine each night to relax during lockdown, asked if her alcohol consumption is too much (file image)

Writing on Mumsnet, the woman revealed she looks forward to relaxing with a bottle of wine after spending the day with her children

Many people argued drinking a bottle of wine each evening is high in calories and too much to drink on a regular basis.

One person wrote: ‘Yes, it’s way too much. Anyone who says it isn’t needs to look at the NHS guidelines. It’s not to curb people’s fun, it’s to prevent people’s risk of developing certain cancers etc.

‘I’m constantly amazed by how people justify drinking to excess, as if anyone who raises concern is some kind of killjoy’

Another said: ‘It is too much but you’re not alone OP. I’ve been the same and realise it’s unhealthy. I’ve been drinking to blot out the constant feeling of anxiety, but I need to find a better solution. It’s not great but at least you kind of know that. Don’t beat yourself up’

A third added: ‘It’s so easily done but that’s about 40 units and NHS guidelines are 14-21 maximum for women. Obviously, I’m sure most people have gone over the guidelines at some point. But if it’s every week, yeah I’d say that’s too much’

A stream of responses argued that the woman is drinking too much alcohol, considering the NHS guidelines

Others confessed they’ve also increased their alcohol consumption during lockdown and said they’re trying to restrict the habit to just weekend.

‘If I had that much wine in then I would drink it. I buy a bottle or two when shopping once a week and then we also have a G&T, but we only drink Friday-Sunday. The first week of lockdown we drank a lot but then made the change. We found it easier to say no drinking on x days than reducing the amount but still drinking every day,’ wrote one.

Another said: ‘I don’t think a bottle in an evening is a huge amount at all. It’s only about 9 or 10 units. At first that will get you completely trollied but once you get used to it, you will be able to handle it perfectly well.’

Others said they’ve also struggled with their alcohol intake during lockdown, suggesting restricting consumption to weekends