If readers ask Trent Dalton one question more than any other about his bestselling debut novel, it is: when will you write a sequel to Boy Swallows Universe?

It seems many aren't quite ready to let go of Dalton's heartfelt semi-autobiographical coming-of-age tale, which became Australia's fastest-selling debut when it was published in June 2018. Set in the working-class suburbs of Brisbane, the Miles Franklin-longlisted novel has now sold more than 500,000 copies in Australia. 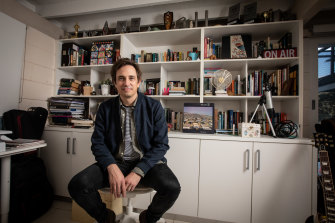 Staggeringly, more than 80,000 copies have been sold in 2020 alone. There's also a film to be co-produced by Joel Edgerton, and a Queensland Theatre Company play, postponed to the Brisbane Festival next year due to the coronavirus pandemic.

Boy Swallows Universe has become a cult phenomenon, and its exploration of male relationships, adolescence and Australia's suburban fringes garnered comparisons to classics penned by Tim Winton and Craig Silvey.

But Dalton says Boy Swallows Universe was also the book he had to get out of his system in order to write the novel he always wanted to write, All Our Shimmering Skies, which is out on Monday. Those readers who begged for a sequel will find themselves in a very different universe. It's one where the sky delivers gifts, curses hover, and rollicking adventures await to be had.

Set in wartime Darwin in 1942, the novel follows 12-year-old Molly Hook, the motherless daughter of the town's gravedigger, on her quest to remove the curse she believes "deep-country sorcerer" Longcoat Bob place on her family. In her journey into the Australian wilderness, she's joined by Yukio, a Japanese fighter pilot who crashed during the bombing of Darwin, and Greta, an actor who was made for stages far bigger than those of country towns.

"In the writing of Boy Swallows Universe, I was genuinely carrying around some rocks. Just the exact same way Molly Hook carries around her rock, her great symbolic kind of rock that she's convinced is her mother's heart. I was carrying around the rocks as well. I had to let go of them in order to be able to write about someone like Molly Hook," Dalton says.

In the author's own words, All Our Shimmering Skies is a "wild thing". Fast-paced and fantastical, it pushes the magical realism, melodrama and larger-than-life characters of Dalton's debut further. 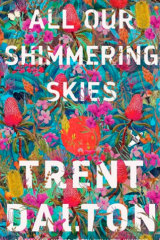 Conscious of the expectations, Dalton says he drew courage from the belief that if he wrote a cracking yarn readers would go with him. He so little expected the success of his debut that Dalton says he was grateful to even have a second book published and the global havoc of COVID-19 has kept him grounded when it comes to the critical and popular reception.

"I thought if I can just write those characters as strong as possible, and just invest them with all my heart, then maybe people who are expecting Boy Swallows Universe two will go, 'Hang on, hang on, I'm happy with this guy's story'," Dalton says. "And so all of that was there, but I did have to push it aside. I tried to convince myself I wasn't worried about it. This was the great funny thing of it, though. I was trying to say to my wife, 'It doesn't matter, it's all gravy, right?' Because I was never expecting to be here."

Writers are often struck by book-two blues, particularly those who have found themselves with a blockbuster on their hands, with Markus Zusak a high-profile recent example. But Dalton describes writing All Our Shimmering Skies as a "joyous relief", one that engulfed him wholly.

"At every turn of Boy Swallows Universe, I had to overcome a thing about, 'Oh my God, am I going to hurt someone with that line?' It's very crippling. You've got to really watch it, and then you've got to fight through that, and still just find the truth of whatever you're trying to write," Dalton says.

"This was much more me, like I felt set free and I was just going for it, and just honouring the story and just going, 'I'm going to follow this story where the universe wants to take it and where Molly wants to take it, and I need to find those answers.'"

Inspiration struck when Dalton's 11-year-old daughter Sylvie, perhaps showing she has inherited Dalton's skills as a magazine journalist, questioned why he had written his debut novel about two boys when he had two daughters.

"A young Australian girl is a character that I would love to create, because right now the story of my own girls' coming of age is actually the story that I'm most obsessed with," Dalton says.

Dalton's fascination with the true story of Hajime Toyoshima, a Japanese fighter pilot whose plane landed on Australian soil during the bombing of Darwin, also crashed into the plot.

The sky is all-encompassing in the novel, and Dalton recalls finding solace in looking above and talking to his late father, Noel, who died while he was writing Boy Swallows Universe and figures in it as the character Robert Bell.

"I felt like there was something deeper at play, and that got me thinking about the idea that the sky can be a friend sometimes, and I love the conversations we all have with the sky and the idea that we all have these private whispers, that each of us are saying different things to that sky and we never say anything trivial to the blue sky. It gets all the deep and the good stuff. I don't want to sound too mystical or anything, but I'm just saying, that's a really cool notion, and then that really got me thinking deeply about the sky."

A handful of scattered seeds took root in Dalton's imagination and grew into All Our Shimmering Skies. While the book does feel different, certain themes, including the role trauma plays within our lives and the power of stories, will be familiar to Dalton's readers. "Own all you carry. Carry all you own," is a refrain throughout the novel. It's a lesson Dalton says Molly Hook shares with Eli Bell, and one he has had to learn too. The way that light can be found in, and made out of, shadows is an interest Dalton once again teases. And, there's the same shimmering, magical quality to both novels.

"And I ran and ran and ran, and then stopped one day and went, 'Why am I running?' When all that stuff that I genuinely feel is what I've been put on earth to write about and unpack still, and just because I've put all those rocks inside a book, doesn't mean the emotion that came with them all has left me."

But if Boy Swallows Universe was the novel Dalton had to write to get to All Our Shimmering Skies, then All Our Shimmering Skies might prove the novel he had to write to return to Boy Swallows Universe. Dalton hasn't started writing a sequel, but he is thinking about one. And for the first time he feels ready to return to the familiar ground of his life story.

"Well, I still haven't worked out what you do with the past, and I'm really taken with the thought of you can leave the past, but the past doesn't leave you, and that's a very powerful thing, I think," Dalton says. "Readers ask, 'What do you think happened to August Bell?' The funny thing is, I had to write All Our Shimmering Skies to kind of answer that."

All Our Shimmering Skies is published by Fourth Estate on Monday.