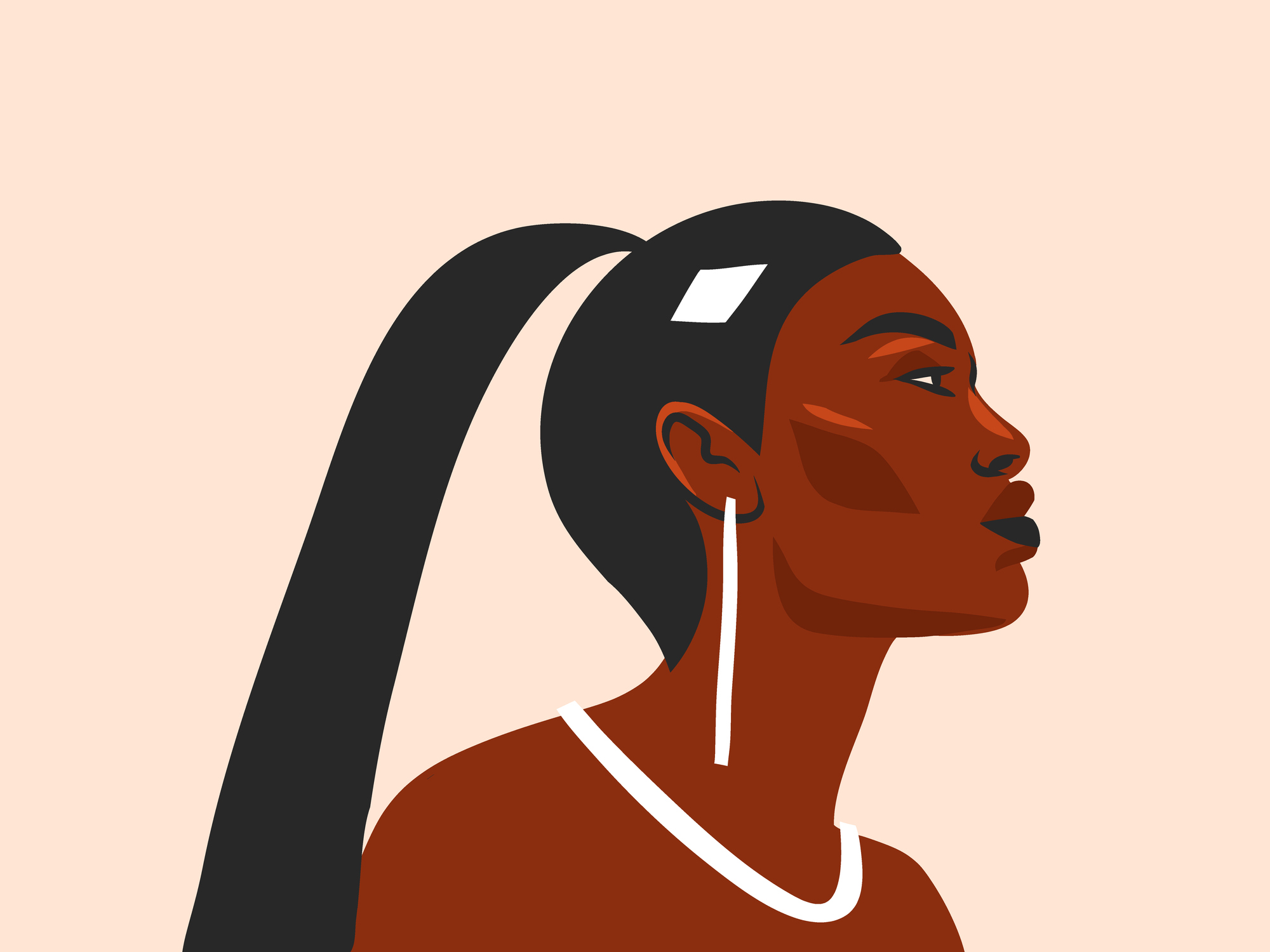 Even if you haven’t heard of main character syndrome, you have probably experienced it at some point.

It’s the sense that life is a movie – and you are the star. It’s the feeling you get when you lean your head against the window of the train and imagine you’re in the opening credits of a whimsical and deeply poignant indie flick.

People with main character syndrome believe that everything that happens centres around them. They are the protagonist and their daily life is part of a wider narrative arc that focuses on their personal highs and lows.

It began as an ironic social media trend, with people on TikTok posting clips poking fun at movies and of themselves for this self-centred habit, but it has since morphed into a wider philosophy, with more people adopting these traits in their real lives.

But, just like in the cinematic world – where there is notable under-representation of diverse talent in leading roles – Black women and women of colour in are rarely given the space or the freedom to take on the role of the main character – even within their own stories.

Being the main character involves behaviours like exaggeration and catastrophising everyday inconveniences, it can even spill over into narcissism and treating people in your life as though they are less important. But it isn’t all negative. The main character also has the power to celebrate their own achievements, see the good in the little things, and prioritise their own wellbeing.

Relegated to the role of sidekick, or funny best friend, women of colour are blocked from accessing this space – and all of the negatives and positives that come with it – because archaic biases and racist stereotypes mean they are more likely to be perceived as arrogant, unpleasant, bossy or aggressive for exhibiting these kinds of traits.

When American sprinter Sha’Carri Richardson won the 100m at the US Olympic trials and clocked the sixth fastest time in history, she pointed at the clock with an expression of unabashed triumph as she crossed the finish line.

As a Black woman with bright orange hair and long acrylic nails, Richardson takes up space, and you could certainly label this move as an example of ‘main character energy’. However, rather than celebrating her win or applauding her self-confidence, some critics online called her ‘ungrateful’, ‘cocky’, ‘unlikeable’.

A similar story played out with the depiction of Meghan Markle and Serena Williams, both of whom have been labelled ‘bullies’ and ‘divas’ for behaviour that arguably falls under the main character category; getting angry after losing a sporting event, or a public fallout with family members.

There is also a distinct lack of popular culture references for chaotic and adorably self-destructive female protagonists that are non-white.

Iconic examples of aspirational female main characters – Effy Stonem and the rest of the manic pixie dream girls – are almost always white women, and they are allowed to be messy, unpleasant and entirely selfish.

Where white women are afforded the space to adopt a quirky and borderline narcissistic personality complex like main character syndrome, Black women are typically excluded and instead encouraged to downplay their achievements and make themselves smaller.

While it is objectively bad to be selfish to the point where you make other people in your life feel unimportant, isn’t there something to be said for living your life as though you are in the leading role?

‘We all have a need to be noticed, to be seen, heard, understood, validated and accepted,’ says Alan Crawford, counsellor at The Mind Map.

‘We tend to perceive the events of our lives as happening “to us” rather than being random. Even the rain can be taken as a personal slight, if it interrupts our plans or impacts on our mood.’

Alan says if we are not careful, we can end up casting other people in supporting roles, which gets in the way of truly empathising with our friends and loved ones. But, he adds, main character syndrome can also be a way of giving our lives meaning.

‘This can actually support psychological resilience and recovery from trauma which perhaps goes some way to explaining why main character syndrome went viral in lockdown,’ Alan explains.

Perhaps main character syndrome is in some way an attempt to wrestle back some control, to re-claim the narrative in the face of this collective trauma.

‘The pandemic has been a collective trauma. As a counsellor, it concerns me that this isn’t adequately recognised. We’ve all gone through a period of anxiety, uncertainty and radical, unprecedented changes to our way of life. Perhaps main character syndrome is in some way an attempt to wrestle back some control, to re-claim the narrative in the face of this collective trauma.’

However, Alan warns that social media seems to encourage many of us to take this idea to new extremes that border on narcissism.

‘Is it healthy for us to be so self-focused? To be so obsessed with self-image and trying to portray our lives in a picture-perfect, movie-quality fashion?’ he asks.

‘In fact, some schools of thought believe that emotional wellbeing and happiness depend on becoming less self-focused. This can improve the quality of our relationships and give us a greater sense of satisfaction, meaning and purpose.’

This is a valid point. But, while main character syndrome may not be the most healthy thing to strive for, the fact that it is a trend that is closed off to certain people because of their race may be reinforcing entrenched inequalities.

Why are women of colour excluded from the main character role?

Alan identifies that there is a ‘degree of white privilege’ that can inadvertently creep into viral trends like main character syndrome.

‘People of colour, particular women of colour, are more likely to be seen as cocky or arrogant when they participate in trends like this, due to the way that racial bias and stereotypes can filter the way people perceive them,’ he tells Metro.co.uk.

‘These biases and stereotypes are not always conscious, but they are the reason that confident and assertive Black women are more likely to be deemed “aggressive” than confident, assertive white women.’

Mentor and business professional Lorraine Thomas, says Black women are not often given the framework or the necessary encouragement to view themselves as the main character.

‘As a Black woman, putting yourself first is a harder behaviour to maintain when typically you are taught the opposite,’ she tells us.

‘You support the people in your life, and that is what you are praised for. For being “strong.” For defending others to the point of protection.

‘It is true that independence is something we like to be acknowledged for, but surviving and thriving are totally different things.

‘Self-care, health, even luxury are things that were to be approached with caution, in the past, and left for someone else, but today’s Black woman should feel unconflicted in embracing such things, and more.’

Main character syndrome is a popular trend because there is an awareness that it is extreme.

We laugh at the idea of dramatising the smallest of events and presenting an OTT romantic/tragic/glamorous self image. It isn’t real life, but there are elements of truth that underpin the concept.

For Black women and women of colour, it is understandable that the trend may feel bittersweet. It is another reminder that many people will never view you as more important than ‘the best friend’.

‘I am not saying main character syndrome is the best way to do things, I still believe we need to lift others,’ says Lorraine, ‘but I appreciate that it is a mindset that at least views oneself as a valuable person who has an important life to live, whatever you do with it.’

The State of Racism

This series is an in-depth look at racism in the UK in 2020 and beyond.

We aim to look at how, where and why individual and structural racism impacts people of colour from all walks of life.

It’s vital that we improve the language we have to talk about racism and continue the difficult conversations about inequality – even if they make you uncomfortable.

We want to hear from you – if you have a personal story or experience of racism that you would like to share get in touch: [email protected]

Do you have a story to share? We want to hear from you.

Get in touch: [email protected]