This article discusses the season three finale of Barry.

The third season of HBO’s Barry (Foxtel On Demand), Bill Hader’s black comedy about a disaffected hitman trying to remake himself as an aspiring Hollywood actor, was a transformative television experience. Too often we want, consciously or subconsciously, our favourite shows to challenge us but not fundamentally change. We need the guard rails to hold the series in place, to keep us engaged but also reassured. Barry didn’t just buck that idea, it weaponised it. The unsettling elements that had slowly taken root in previous seasons finally took over.

Created by Hader, the Saturday Night Live polymath, and Alec Berg, a contributor to Curb Your Enthusiasm and Silicon Valley, Barry was always a delicious deception. The absurdity kept you off-balance, one step behind the mood and one layer removed from the real Barry (Hader). Trailing a target to the acting class run by Gene Cousineau (Henry Winkler), the former marine was a terrible thespian – it was only when he spoke honestly about how he had killed people, whether in Afghanistan or America, that he was acclaimed for a worthy performance. 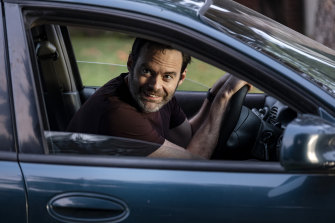 Bill Hader plays a disaffected hitman who remakes himself as a (bad) Hollywood actor in the black comedy Barry.Credit:HBO/Foxtel

Violence is the currency of the show, but it has never been simple to pigeonhole. Like the least inspired of crime dramas, killings would happen with abrupt ease. Hader’s Barry Berkman – his stage name is Barry Block – would be baffled by both the people he was hired to off, and his own lack of reaction. Was it ludicrous or tragic that Barry would go from one murder to the next, unaware of the trauma he’d brought back from war and how it had damaged him? Laughing, the show’s first season suggested, might be the safest response.

But over three seasons that comic detachment slowly disappeared. One way of looking at Barry is that it was about the ramifications of your heinous acts catching up with you. With each batch the pace quickened and the impact deepened. In the first season, when Barry stuck around to take Cousineau’s class, he had to hear the father of a murdered student express his profound grief; by the third season the families of various victims were pursuing Barry for revenge and those closest to him had been indelibly marked by his actions.

Somehow Hader and Berg contrasted this with entertainment industry satire and mordant gags. A Chechen gangster, Noho Hank (Anthony Carrigan), who’d fallen in love with the L.A. lifestyle, was a source of comic relief. But the more Barry tried to leave his life as a hitman behind, the more he simply infected those he was attracted to. Hoping to abandon his manipulative fixer, Monroe Fuches (Stephen Root), Barry transferred his respect and affection to Cousineau. Yet by the end of the show’s first season Barry had killed someone the veteran actor loved. 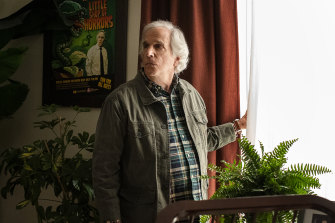 While trailing a target, Barry is led to the acting class run by Gene Cousineau (Henry Winkler).Credit:Warrick Page/HBO

No one fell deeper into Barry’s world than Sally Reed (Sarah Goldberg), another acting student who had her own buried trauma. Pursued by Barry, she became his girlfriend even as her talent shone through. But when her TV show got torpedoed, Sally spiralled out of control, embracing the violence Barry carried inside him and finally expressing it in a cathartic scene in the final episode where she fought for her life and then brutally took another. “Barry did this,” Barry coached her afterwards – he thought he was protecting her, but it was the truth.

As the storytelling became bleaker – the laughter, still expertly marshalled, hid less and less – the visual language of Barry became richer and more pronounced. The third season, with Hader and Berg directing every instalment between them, might be the closest we’ll ever get to a Coen brothers series, with shards of dream logic and deadpan action sequences. At one point a suburban street simply turned into a beach, a step away from reality that somehow served to focus Barry’s journey.

The eight episodes of the third season were masterfully cohesive. Everything was connected, the tension both thrilling and morally self-aware, the performances impeccable. It was noticeable how guns had become the norm. The families of victims, alerted to Barry’s guilt by the conniving Fuches, procured weapons for their revenge. The show has a sunny Californian light, but it spoke explicitly to how Americans are increasingly inured to violence. 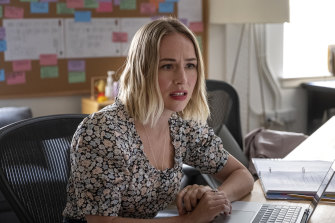 Sarah Goldberg is an acting student with hidden traumas who is drawn into Barry’s orbit.Credit:HBO/Binge

It was only when Cousineau, who’d rightly become terrified of Barry even as his student professed his filial love, decided to pick up a gun and take a life that he could deceive Barry and get the upper hand. The just-concluded third season had such a cataclysmic and conclusive ending that it could easily have been the show’s finale. But HBO has commissioned a fourth, with Hader directing every episode. It’s difficult to imagine where it will pick up, but Barry has more than earned the right to try. The series didn’t give itself, or the audience, easy excuses. If you’re still merely laughing, then Barry’s last joke is on you.

Barry is now streaming on Foxtel On Demand and Binge.