NYPD Commissioner Dermot Shea argues there is evidence of an organization at times behind some of the protests.

The "boogaloo" anti-government movement describes a group of extremists who believe the nation is on the verge of a second civil war.

The Anti-Defamation League defined “boogaloo” in Nov. 26, 2019, as being “extremists’ new slang term for a coming civil war.”

“From militia groups to white supremacists, extremists on a range of online platforms talk about—and sometimes even anticipate—the ‘boogaloo,’” the ADL states on its website. Among some extremists, the rise of "boogaloo" may signify an increased willingness to engage in violence. 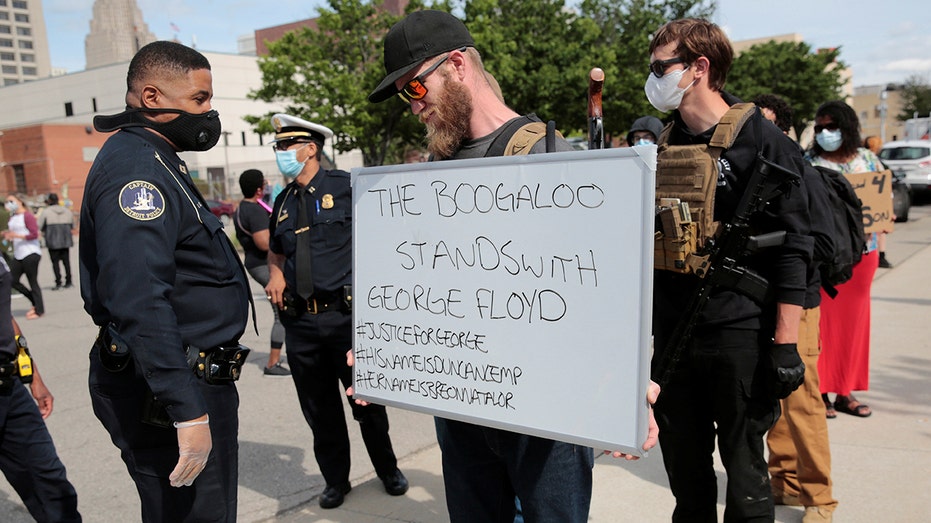 A Detroit Police officer reads a “The Boogaloo stands with George Floyd” sign held by an armed man during a rally in Detroit, Michigan, on May 30, 2020, against the death in Minneapolis police custody of George Floyd.(REUTERS/Rebecca Cook)

Hawaiian shirts and leis – sometimes considered the signature look for the “boogaloo” anti-government movement – along with bright colors are designed to get attention.

The loose movement, which uses an ’80s movie sequel as a code word for a second civil war, is among the extremists using the armed protests against stay-at-home orders as a platform. Like other movements that once largely inhabited corners of the internet, it has seized on the social unrest and economic calamity caused by the novel coronavirus pandemic, and now, the riots that arose in the wake of peaceful protests following the death of George Floyd, to publicize its messages.

Its name comes from the panned 1984 movie “Breakin’ 2: Electric Boogaloo,” which has become slang for any bad sequel. Another derivation of “boogaloo” is “big luau” — hence the Hawaiian garb. 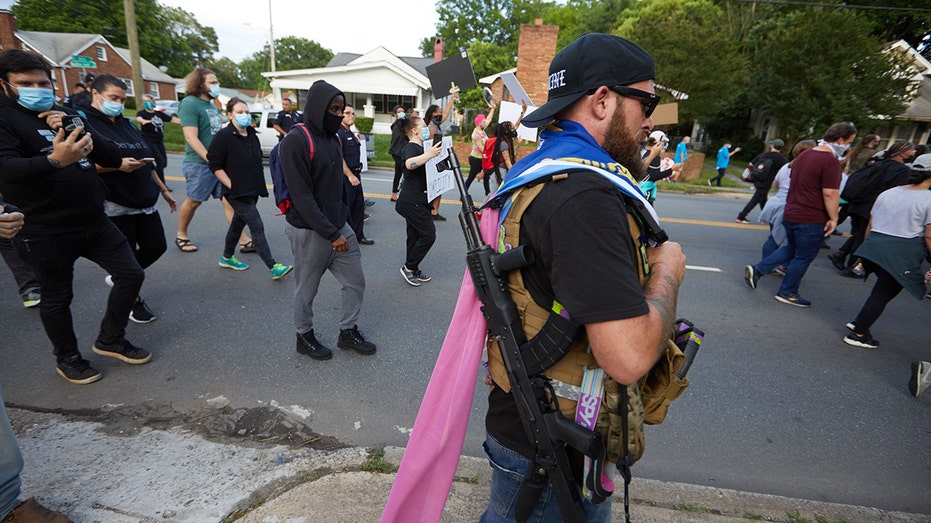 A member of the far-right militia Boogaloo Bois walks next to protesters demonstrating outside Charlotte Mecklenburg Police Department Metro Division 2 just outside of downtown Charlotte, North Carolina, on May 29, 2020. (LOGAN CYRUS/AFP via Getty Im

Far-right gun activists and militia groups first embraced the term before white supremacist groups adopted it last year. And while some “boogaloo” followers maintain they aren’t genuinely advocating for violence, law enforcement officials say they have foiled bombing and shooting plots by people who have connections to the movement or at least used its terminology.

Facebook has since updated its policies to prohibit the use of “boogaloo” and related terms “when accompanied by statements and images depicting armed violence,” the company said in a statement.