A Northern California wildfire that destroyed a foothill hamlet has become the state’s deadliest blaze of the year with 10 people confirmed dead — and the toll could climb as searchers look for 16 people who are unaccounted for. Deadly blazes in heavily populated northwest Oregon were growing, with hundreds of thousands of people told to flee encroaching flames while residents to the south tearfully assessed their losses.

Authorities said more than 500,000 people — more than 10% of Oregon’s population — have been forced to evacuate,  the Oregon Office of Emergency Management reported late Thursday.

California’s North Complex fire, which exploded in wind-driven flames earlier in the week, was advancing more slowly Friday after the winds eased and smoke from the blaze shaded the area and lowered the temperature, allowing firefighters to make progress, authorities said.

However, the smoke made for poor visibility and fire helicopters couldn’t fly Thursday.

The North Complex Fire was formerly known as the Bear Fire.

As of Thursday evening, the North Complex Fire had grown to 65,295 acres and was at zero containment, CBS San Francisco reports.

In most parts of the state, red flag warnings of extreme fire danger because of hot, dry weather or gusty winds were lifted.

Only a day or two earlier, the North Complex fire tore through Sierra Nevada foothills so quickly that fire crews were nearly engulfed, locals fled for their lives to a pond, and the town of Berry Creek, population 525, was gutted.

Deputies and detectives were searching for human remains as they made their way into devastated areas with a team of anthropologists from Chico State University, Bell said.

Burned-out and overturned cars, downed power lines and the ruins of buildings littered Berry Creek and nearby areas, the Sacramento Bee reported. 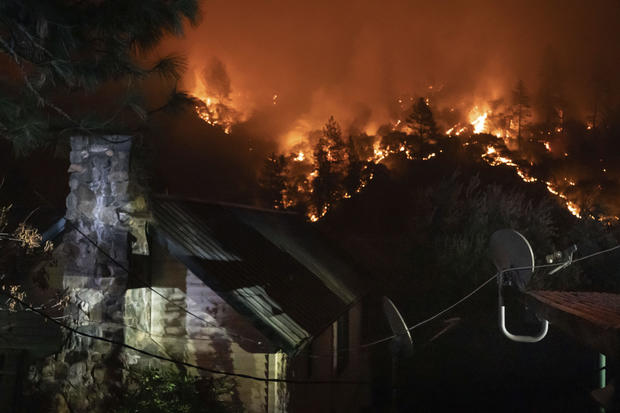 More than 2,000 homes and other buildings had burned in the fire, which began several weeks ago as a lightning-sparked collection of blazes northeast of San Francisco. The final toll is expected to be much higher. Damage assessment teams planned to begin a methodical search of the burned areas on Friday.

The speed and ferocity of the fire astonished observers, even those who remembered a blaze only two years earlier that killed some 85 people and devastated the town of Paradise, a few miles away from the current blaze.

Residents jammed the main road out of town on Wednesday amid falling ash and red skies. Authorities lifted an evacuation warning for Paradise on Thursday but authorities urged people to remain alert.

CBS Sacramento says it was the first evacuation order in Paradise since the Camp Fire.

A crew fighting the fire was overrun by flames Wednesday when winds shifted and its members escaped with only minor injuries after deploying emergency shelters. It was the second time in two days that firefighters in California had to take the rare last-ditch effort to save their lives.

The blaze is among 29 major wildfires burning from the Oregon border to just north of Mexico. More than 4,800 square miles have burned so far this year — more land than Rhode Island, Delaware and Washington, D.C., combined — and fall is typically the worst season for fires. Nineteen people have been killed and at least 4,000 structures have burned across California.

Smoke blew into vineyards in wine country north of San Francisco, and rose above scenic Big Sur on the Central Coast and in the foothills and mountains of Los Angeles, San Bernardino and San Diego counties in the southern part of the state.

Neighboring Oregon and Washington also have been beseiged.

More than 1,400 square miles have burned this week in Oregon, where hot, windy conditions continued.

One fire approached Molalla, Oregon, triggering a mandatory evacuation order for the community of about 9,000 people located 30 miles south of Portland. A police car rolled through the streets with a loudspeaker blaring “evacuate now.” 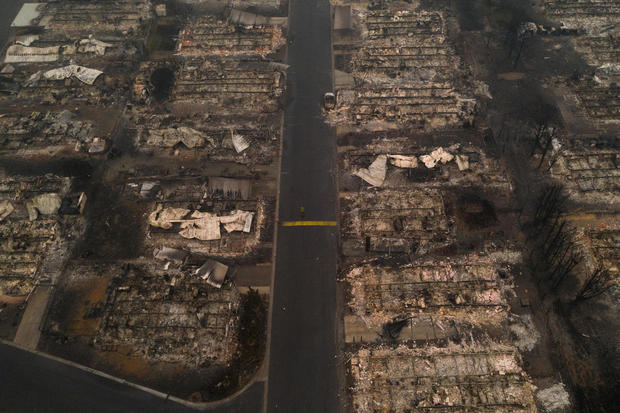 Inmates were being moved from a women’s prison less than a mile from Interstate 5 in Portland’s southern suburbs “out of an abundance of caution,” the Oregon Department of Corrections said.

With two large fires threatening to merge, some firefighters in Clackamas County, which includes Molalla, were told to disengage temporarily because of the danger. Officials tried to reassure residents who abandoned their homes, and law enforcement said patrols would be stepped up to prevent looting.

Meanwhile residents of the small Oregon town of Phoenix, near the California state line along Interstate 5, walked through a scene of devastation after one of the state’s many wildfires wiped out much of their community. A mobile home park, houses and businesses were burned, leaving twisted remains on charred ground.

Many of the residents were immigrants, with few resources to draw on.

The Federal Emergency Management Agency estimated that 600 homes were burned by the fire that started in Ashland and tore through Phoenix, the Mail Tribune of Medford reported.

Oregon officials haven’t released an exact death count for the wildfires but at least four fatalities have been reported in the state. One person was killed in wildfires in Washington.

Oregon officials were shocked by the number of simultaneous fires, which stood at 37 Thursday, according to the state Office of Emergency Management.