State border closures and Victorian lockdowns threaten to wipe away a jobs recovery that has seen 689,000 people regain work since April, escalating a political fight over whether to scale back billions of dollars in household assistance.

The Morrison government will assure Australians of the “cause for optimism” in an economic recovery by revealing a sharp improvement in the effective unemployment rate from 14.9 per cent in April to 9.9 per cent in July. 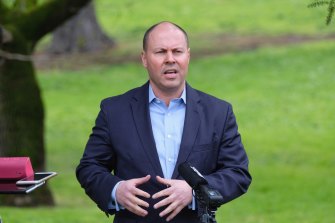 The Treasury analysis finds that more than half the 1.3 million workers who lost their jobs or had their hours reduced to zero in the first stage of the pandemic have since regained work.

But Treasury warns most of the gains could be reversed by the business closures in Victoria and the border checks across the country, pushing the national effective unemployment rate above 13 per cent in the coming months.

Treasurer Josh Frydenberg will release the estimates as Parliament resumes on Monday with Labor warning against a cut to the JobKeeper rate and other income support for millions of people who have lost work.

“We know the road to recovery will be bumpy as we have seen with the setback in Victoria,” Mr Frydenberg said.

“However, the jobs recovery across the rest of the country gives cause for optimism that through containing the spread of the virus and reopening the economy we will get through this.”

About 315,000 workers have regained employment across NSW since April, in the strongest recovery of all the states according to the analysis.

This suggests 46 per cent of workers who lost their jobs or had their hours cut to zero – and were in many cases helped with JobKeeper – have since gone back to some work.

About 149,000 workers regained employment in Victoria from April to July. This suggests 21.6 per cent of workers who lost their jobs or had their hours cut to zero went back to some work, although not necessarily full-time work.

About 100,000 workers have regained employment across Queensland, where the effective unemployment rate has fallen from 15.1 per cent in April to 11.4 per cent in July.

The gains have occurred across the country, with about 67,000 people regaining employment in Western Australia, 51,000 in South Australia and 17,000 in Tasmania.

The Treasury analysis takes the official unemployment rate and adds the workers who have had their hours cut to zero but kept their connection with their employer thanks to JobKeeper, which has supported at least 3.5 million workers.

The Victorian outbreaks are blamed for the likely reversal, with 450,000 falling back into effective unemployment over August and September, the majority of them in Victoria.

The trends are central to the political argument in Parliament this week as Mr Frydenberg prepares to introduce legislation to extend JobKeeper until the end of March, six months longer than first planned.

The legislation and associated regulations will also scale back the JobKeeper rate as well as the value of the temporary coronavirus supplement for JobSeeker recipients.

Labor appears likely to support the changes, as it did with the original JobKeeper scheme to avoid voting against urgent assistance, but it has warned the government against slashing payments when the economy needs to be revived.

“It is up to the government to consider whether the new rates are sufficient or not,” Labor's Aged Care spokeswoman Julie Collins said.

“And the government needs to make some decisions about whether or not the changes that it’s making are suitable in light of the outbreaks in Victoria.”

Labor is yet to see the draft legislation and Ms Collins said the Opposition would decide its position once the government’s proposal was put forward.

With the Grattan Institute calling for a further stimulus of $70 billion and social service groups attacking the cuts to the JobKeeker and JobSeeker payments, the government will point to the new Treasury analysis to defend its management of the economy.

“There is still a long way to go through this crisis and high frequency data is showing signs that the jobs recovery may be slowing as state border closures have been tightened,” Mr Frydenberg said.

The government has committed $180 billion in spending including $101.3 billion on JobKeeper, $31.9 billion on cash flow help for employers, $16.7 billion on income support and $9.4 billion in direct payments to households including pensioners.

The government and the Reserve Bank have offered another $125 billion in lending or loan guarantees.

Get our Coronavirus Update newsletter for the day’s crucial developments and the numbers you need to know. Sign up to The Sydney Morning Herald’s newsletter here and The Age’s here.