Girl, 3, loses her eye to a rare childhood cancer as mother warns the ‘white coating’ she mistook for an innocent scratch was the first sign of a tumour

A mother has revealed how her ‘world was ripped apart’ when what she thought was a scratch on her three-year-old daughter’s eye turned out to be cancer.

Evie Wedderburn, from Northumberland, was just one in January 2020 when she was diagnosed with retinoblastoma – a rare type of eye cancer normally affecting children under five.

Despite gruelling chemotherapy and radiotherapy, the toddler developed more tumours and was forced to have her to have her eye removed earlier this month.

Mother-of-two Kara Wedderburn, 25, said she and husband Ryan, 28, were ‘devastated’ after the news of Evie’s diagnosis, and want to make other parents aware of retinoblastoma symptoms. 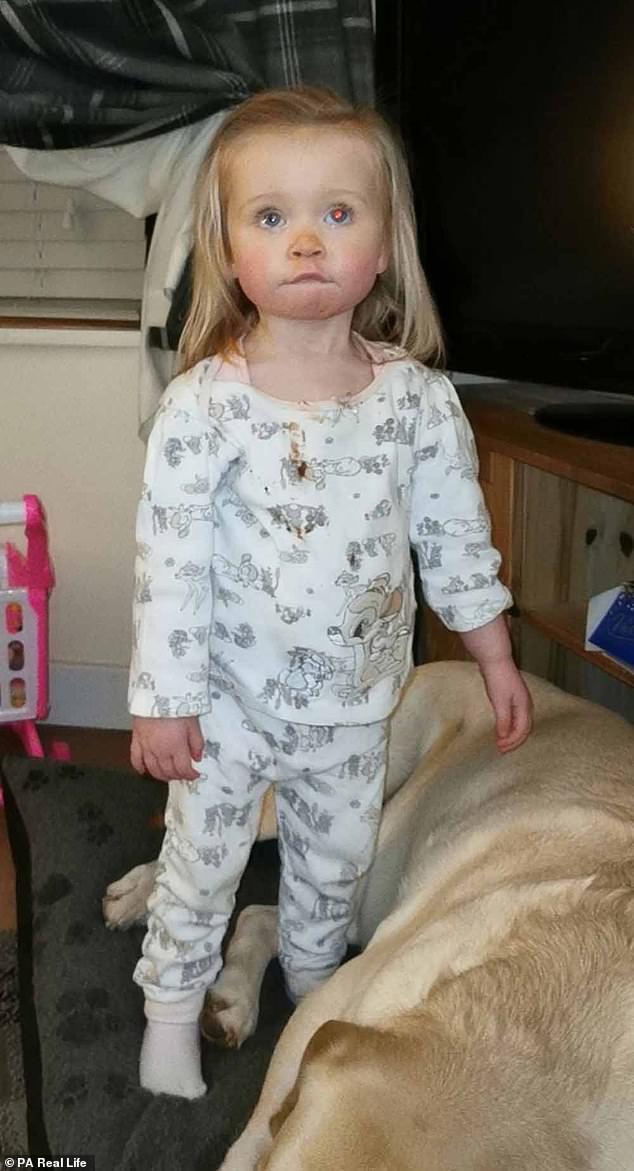 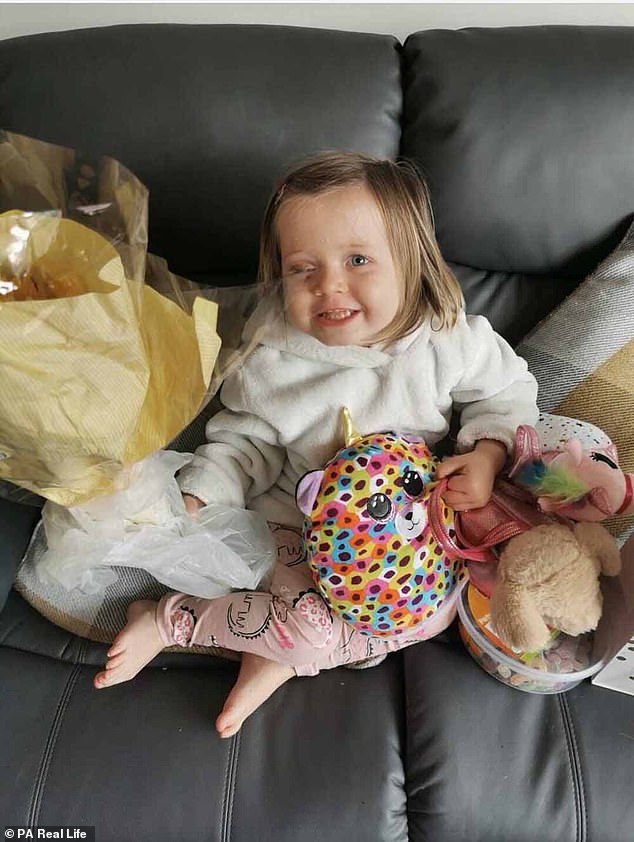 Despite gruelling chemotherapy and radiotherapy, the toddler developed more tumours and was forced to have her to have her eye surgically removed earlier this month. She is pictured at home following the procedure 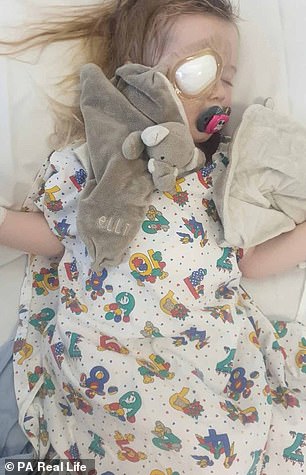 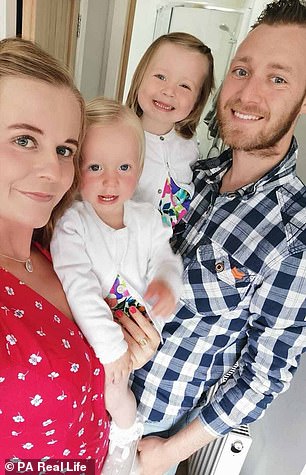 Mother-of-two Kara Wedderburn, 25, (right, with daughters Evie and Olivia) said she and husband Ryan, 28, (right) were ‘devastated’ after the news of Evie’s diagnosis, and want to make other parents aware of retinoblastoma symptoms. Left, Evie in hospital having her eye removed

‘Being told she had cancer was just devastating’, said Kara. ‘I was pregnant with Evie’s sister, Olivia, when she was diagnosed, and we felt like our world had been ripped apart.

‘Evie was absolutely fine in herself – that was what was so frustrating. We had no idea what the signs were or what to be looking for, but we’d never even heard of retinoblastoma.’

She said: ‘At a certain angle, there was a white coating on Evie’s right eye.

‘Our Labrador Callie had recently scratched her forehead accidentally and we thought she could have caught her eye on her paw.’ 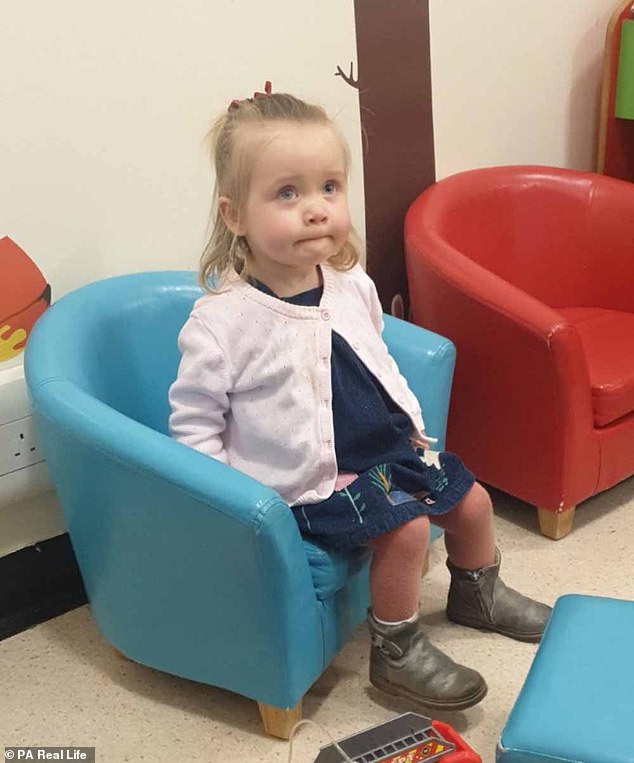 Former teaching assistant Kara first noticed a white glow to Evie’s right eye in December 2019. Evie is pictured at the Royal Victoria Infirmary where she was given her diagnosis 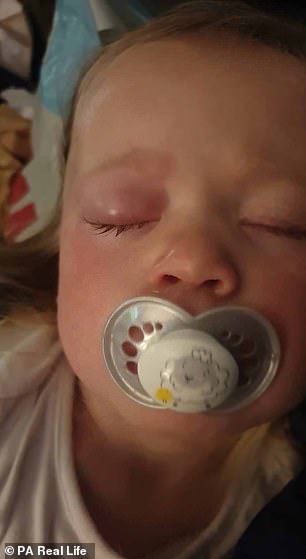 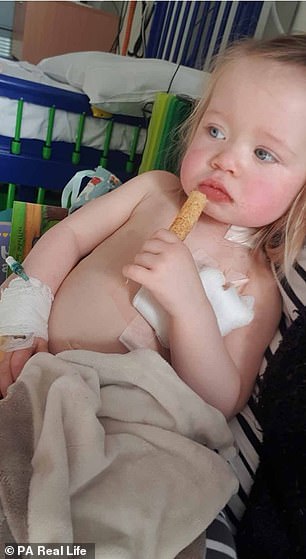 Within days she was sent to Birmingham Children’s Hospital where she began treatment. Left, Evie is pictured left after undergoing cryotherapy, right after having a central line fitted amid her treatment 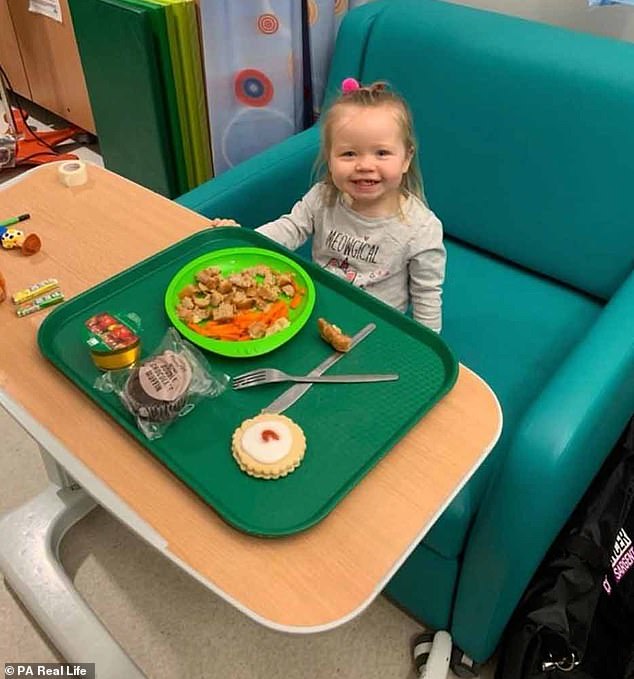 Evie began her first of six rounds of chemotherapy in January. She is pictured in hospital after undergoing her first round of the treatment

When it failed to clear at the beginning of January, Kara took Evie to the GP, who quickly referred her to the Royal Victoria Infirmary, in Newcastle-Upon-Tyne.

Within days she was sent to Birmingham Children’s Hospital.

Kara said: ‘We’d never heard of retinoblastoma and we were being told she was going to lose her eye because the tumour she had was that big.

‘She was diagnosed at the RVI on January 13, and we were in Birmingham days later for her to be examined under anaesthetic on January 17. 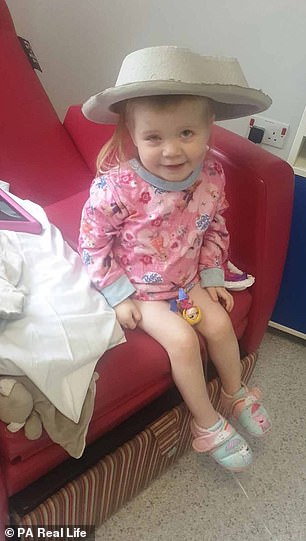 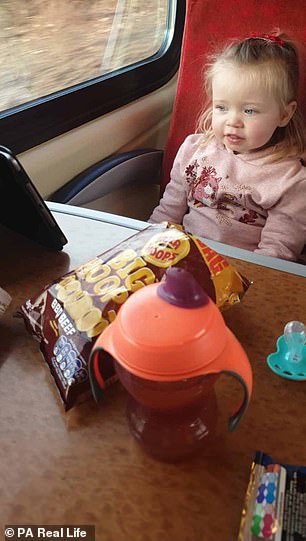 Evie is pictured left smiling in hospital during her treatment, right on the train on the way to her treatment 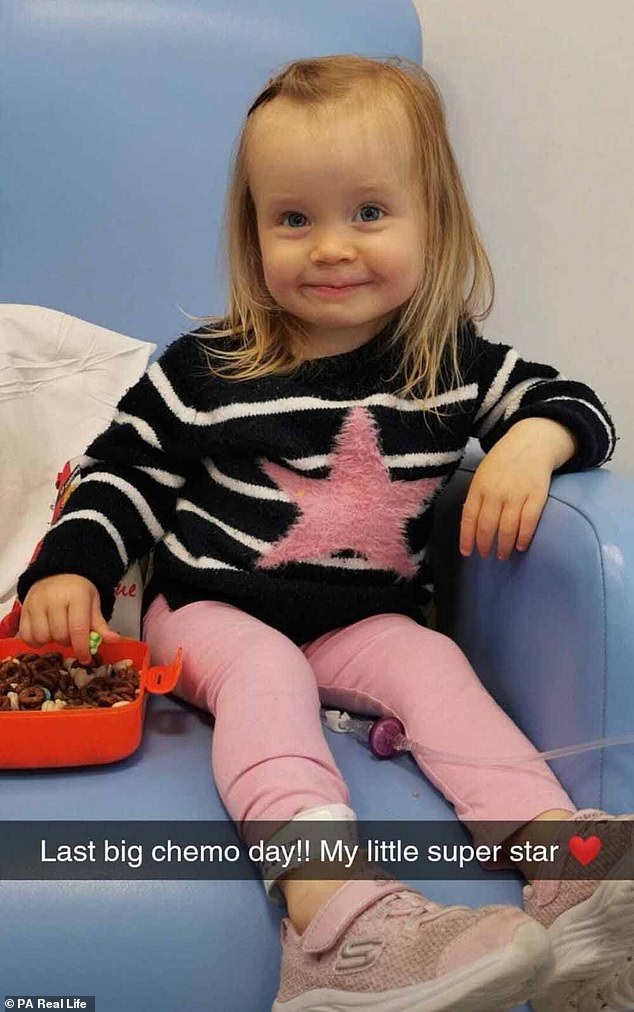 In July, her parents were told the last two rounds had not worked and she needed intravitreal chemotherapy injected into her eye. Evie is pictured on her last day of chemotherapy

‘Straightaway, we thought, “Well that’s it, her eye’s coming out”, but they told us we could try and save it and that’s the route we went down.

‘It was just such a shock. I’d been Googling as any mother does and thought, ‘It’s not going to be something like that. Ryan and I were both just devastated. We couldn’t believe it.’

Evie began her first of six rounds of chemotherapy in January, but sadly, in July, her parents were told the last two rounds had not worked and she needed intravitreal chemotherapy injected into her eye.

The rare form eye cancer common among under fives: What is retinoblastoma?

Retinoblastoma is a rare type of eye cancer that usually affects children under the age of five.

As it is usually caught early in the UK, 98 per cent of children with the disease are successfully treated.

About 50 children develop the condition every year in Britain.

It affects up to 300 youngsters annually in the US.

Retinoblastoma is specifically a cancer of the retina, which is the light-sensitive lining at the back of the eye.

It can affect one or both eyes.

A fault gene is responsible in about 40 per cent of cases. This can be inherited from the sufferer’s parents or may occur spontaneously.

The most common symptoms are the pupil looking like a cat’s eye and the child developing a squint.

The cat eye look is most commonly seen in photos.

Small tumours can usually be treated with laser or freezing treatment.

‘In November she had a radioactive plaque fitted to her eye and that worked really well. We were lucky that her tumour at the time was suited to that – as it has to be in a certain place.’

Caught completely off-guard by Evie’s diagnosis, her parents had initially assumed chemotherapy would do the trick.

Kara said: ‘We didn’t understand the full impact of her cancer. We just thought she’d have the chemotherapy and be done with it.

‘You just don’t know what it will be like until you’re going through it.’

Sadly, in March 2021, another tumour was detected close to Evie’s optic nerve, which was discovered after Evie’s retina detached.

‘That was in a really bad place,’ Kara said. ‘She had to have an MRI scan and yet more treatment.

‘They gave her intra-arterial chemotherapy which meant they put something in her groin, and it fed the drugs through a catheter into the eye to kill the tumour.’

This was followed at the beginning of August by Evie developing eight smaller tumours further inside her eye, which were treated with more intravitreal chemotherapy.

Kara said: ‘She developed a slight squint which we didn’t pick up on, but it turned out to be a sign of a new tumour being there.

‘We went swimming every weekend and one Saturday her eye flared up and went really red.

‘She was in such a lot of pain with it, I took her to the doctor.’

Medics thought the little girl had chemical conjunctivitis or an allergic reaction, but none of the ointments or drops prescribed helped soothe her pain.

Sent back to the hospital in September 2021, Kara and Ryan were told she had developed yet another tumour – this time at the front of her eye.

Kara said: ‘The eye had made new blood vessels with this tumour, which is why she was in so much pain.

‘Her cancer was very aggressive. Every retinoblastoma is unique, but hers is very hard to control. Her optic nerve tumour doubled in size just in one week.

‘Even morphine wasn’t helping her. It was awful. They said we could try and treat it but we were risking Evie’s life if we tried as there was a chance it could spread. There was no other option.

‘Evie’s health was the priority. You do wonder are we torturing her, should we keep going, but now she’s had the operation she’s like a different child.’

Evie had her eye removed on September 16, 2021, in a three-hour operation at Birmingham Children’s Hospital, and Kara said the difference in her is remarkable. 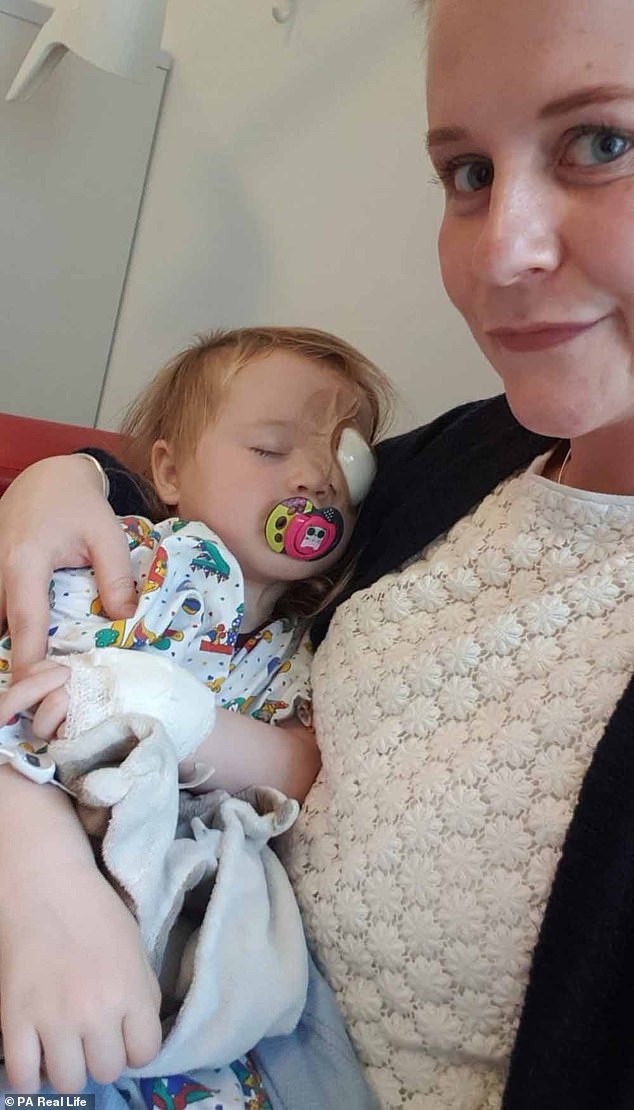 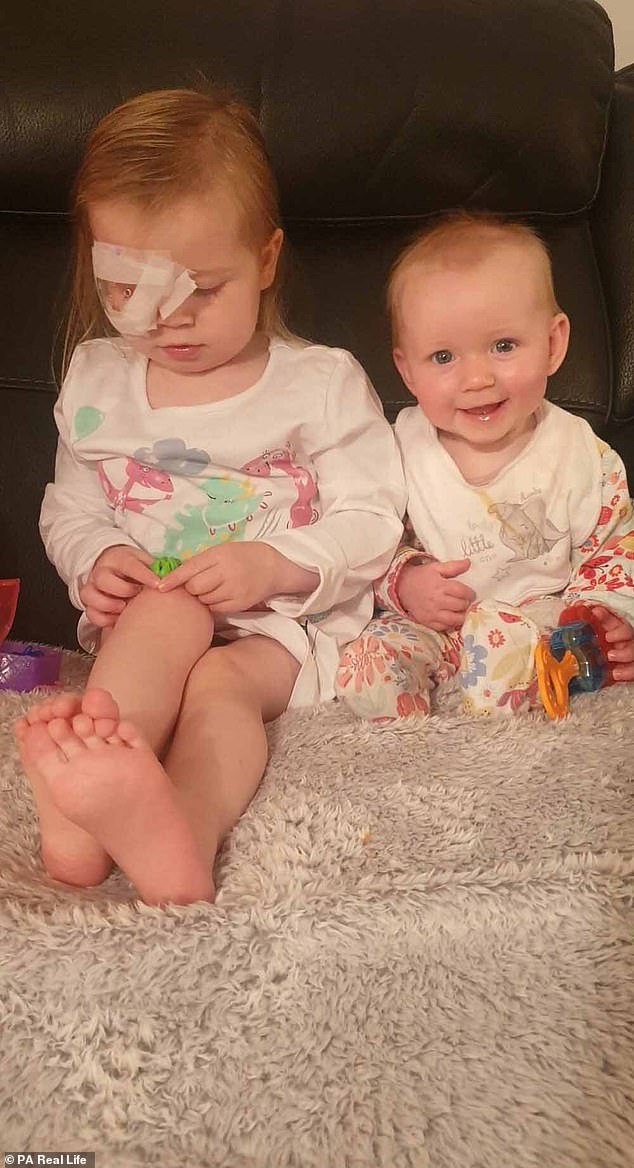 ‘She was in so much pain and now that it’s out she’s like a different child,’ she said.

‘She’s so much happier and back to the usual Evie. It makes you feel like you’ve done the right thing.

‘She would play with her sister and say, “Oh my eye, my eye,” before the operation, as she couldn’t stand the pain.

‘It was so hard for us to watch as we couldn’t do anything but give her pain relief and it wasn’t helping. Now she sleeps through the night and wakes up happy – it’s amazing.’

Evie’s eye has been sent to a microscopic lab for testing and the family are awaiting the results to find out whether she will need any further chemotherapy or treatment.

Evie had her eye removed on September 16, 2021, in a three-hour operation at Birmingham Children’s Hospital. She is pictured L-R at home with the family dog following her surgery 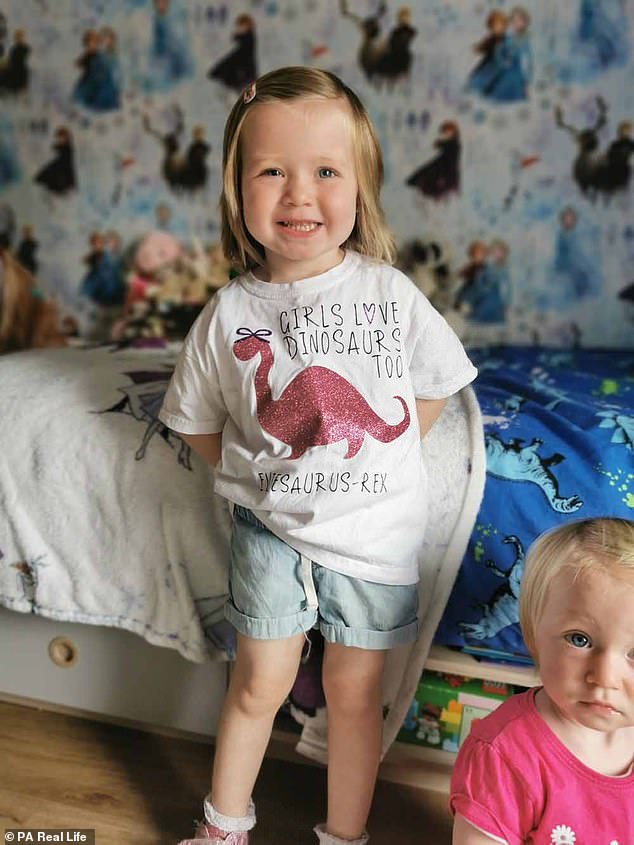 Evie, pictured at home with sister Olivia, has a temporary prosthetic eye at the moment, and once her socket has healed will be fitted with a permanent replacement

She has a temporary prosthetic eye at the moment, and once her socket has healed will be fitted with a permanent replacement.

Kara said: ‘Evie is such a special girl and deals with this journey so well. She is a truly extraordinary, amazing and inspiring girl and we are so, so proud of her.

‘We would like to say a special thank you to Birmingham Children’s Hospital. Our consultant has been amazing and reassuring and we can’t thank him enough for everything.

‘The staff are amazing with Evie and we wouldn’t have got through apportionments without them, while the support from the Childhood Eye Cancer Trust (CHECT) team has also been incredible.

‘Thank you also to all our family and friends for their continuous support, and especially to my mum Debbie. I couldn’t have got through it without her endless love and support.

‘My advice to other people in this position is to go straight to your GP or local hospital if you suspect anything, as early diagnosis can mean a much quicker journey and a lot less invasive treatment for your child. 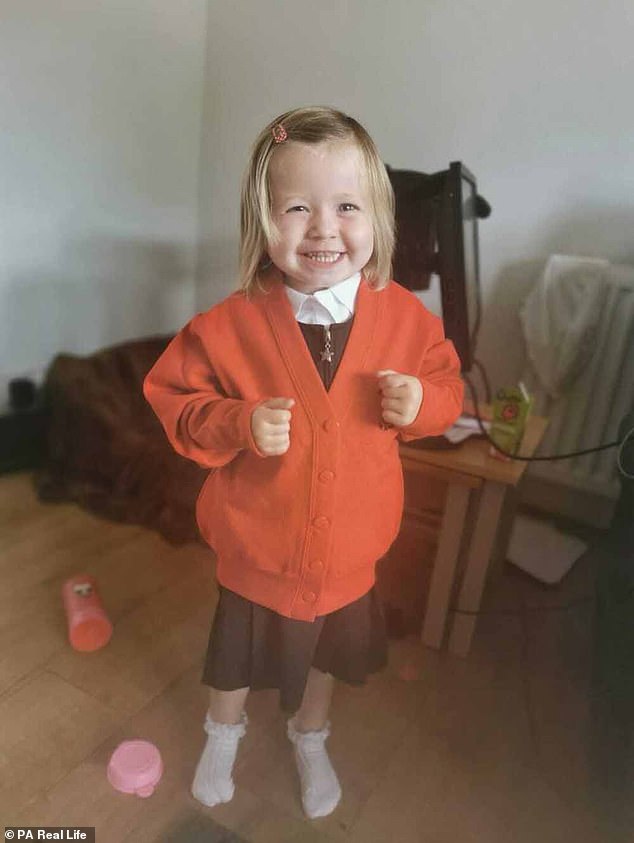 Evie’s eye has been sent to a microscopic lab for testing and the family are awaiting the results to find out whether she will need any further chemotherapy or treatment. She is pictured ahead of her first day of nursery this year 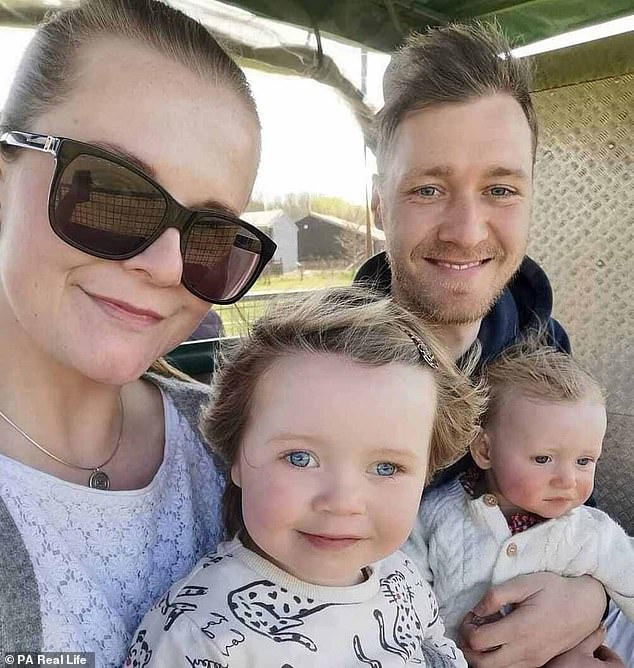 Evie’s parents, pictured with their children following Evie’s surgery, said: ‘My advice to other people in this position is to go straight to your GP or local hospital if you suspect anything, as early diagnosis can mean a much quicker journey and a lot less invasive treatment for your child’

‘You have to act fast with retinoblastoma. We went from having no understanding to learning many things along the way.’

This month, for Childhood Cancer Awareness Month, the Childhood Eye Cancer Trust (CHECT) is urging parents and healthcare professionals to be aware of the most common possible symptoms of eye cancer – a white glow in the eye in a flash photo or other certain lighting conditions and a squint.

Patrick Tonks, Chief Executive of the Childhood Eye Cancer Trust said: ‘Retinoblastoma is rare, with around one baby or young child being diagnosed in the UK each week.

‘Symptoms can be quite subtle and children often seem well in themselves, which can make it hard to diagnose. Sadly, in just under half of all cases, a child has to have an eye removed as part of their treatment.

‘It is very important, as in Evie’s case, that symptoms are recognised and that a healthcare practitioner makes an urgent referral.’