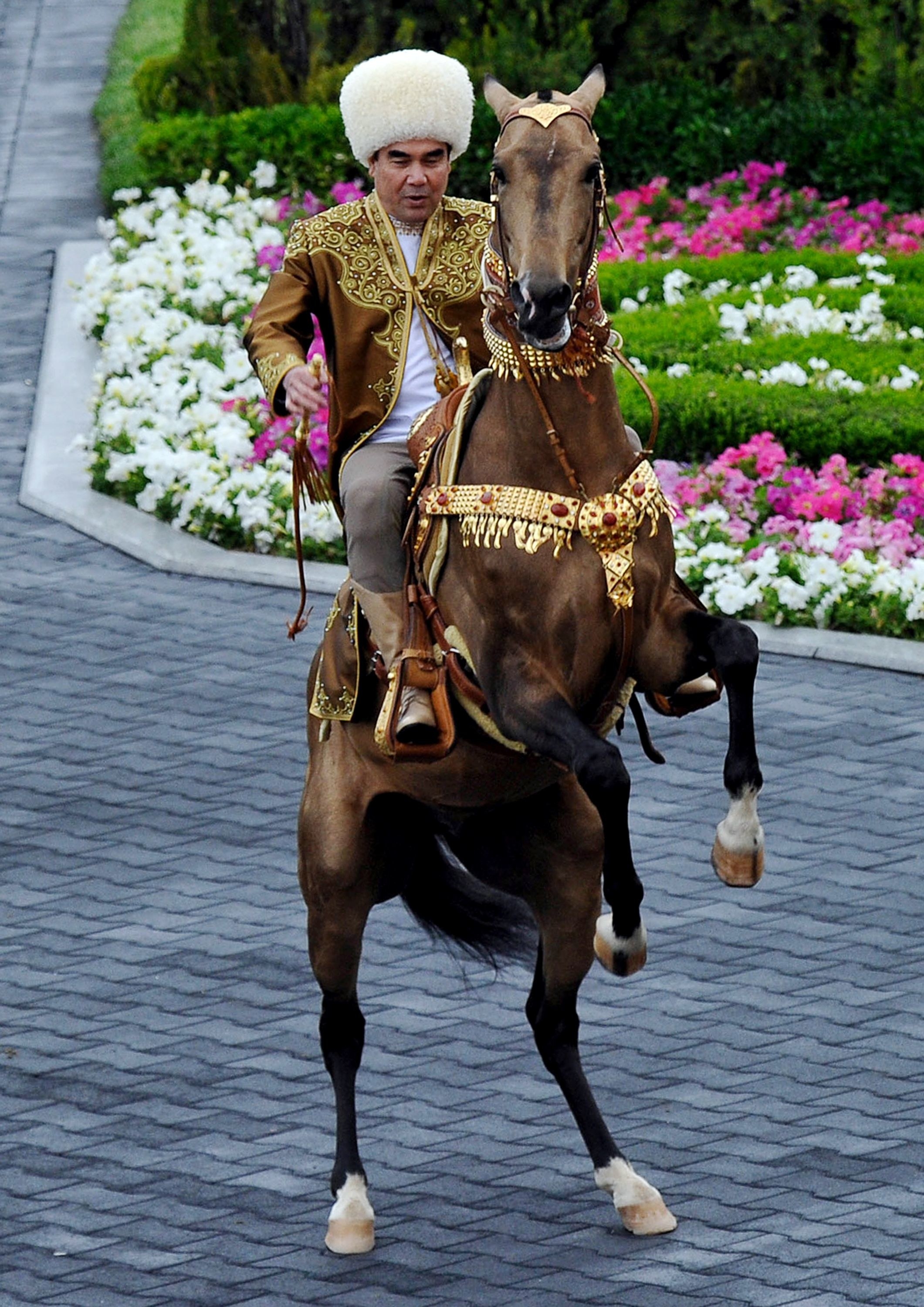 BuzzFeed News has reporters across five continents bringing you trustworthy stories about the impact of the coronavirus. To help keep this news free, become a member and sign up for our newsletter, Outbreak Today.

As countries around the world continued to encourage their people to stick to strict social distancing measures in an effort to stop the spread of the novel coronavirus, Turkmenistan’s president ordered hundreds, if not thousands, of his citizens to take part in National Horse Day events — starring himself and his rare steeds.

Celebrated on April 26, the events, led by authoritarian Gurbanguly Berdimukhammedov, included a race at a packed equestrian sports complex near the capital of Ashgabat, an annual horse beauty contest, and horse dancing performances, according to state and opposition media reports.

Some 186 countries and territories have reported more than a combined 3.2 million cases of coronavirus and 220,000 related deaths. Even nearby Tajikistan, ruled by another authoritarian, publicly announced on Thursday its first cases of COVID-19.

But secretive Turkmenistan continues to hold out, with the government insisting that the country has miraculously been able to avoid the pandemic altogether while investing $680 million on horse care instead of the country’s deficient health care system.

It is doing so despite a growing body of evidence that the coronavirus is, in fact, already there and even after it accepted nearly one million dollars in health assistance from the US as part of Washington’s global response to help stem the spread of the virus.

Skeptical Central Asia experts, government critics and local journalists are not surprised by the neglectful attitude of authorities; reports say Berdimukhammedov has ordered plainclothes police officers to pull people off the streets just for uttering the word “coronavirus” and doctors to ignore positive diagnoses.

Kate Watters, co-founder and executive director of Crude Accountability, an organization focused on environmental and social justice in Central Asia, told BuzzFeed News that unlike some of its fellow former Soviet neighbors, Turkmenistan “never had that moment of opening up.”

“The first instinct in that experience is to say ‘We don’t have a problem,’” she said.

Others say information about coronavirus cases is being suppressed through threats and intimidation, and that disinformation is being pushed by Berdimukhammedov and loyal state-run media.

“All medical data is doctored,” Sebastien Peyrouse, a research professor at George Washington University whose focus is Central Asia and who is well-sourced inside Turkmenistan, told BuzzFeed News.

In recent weeks, when someone there has tested positive for COVID-19, “they just don’t diagnose it, they diagnose them with pneumonia,” a common symptom of the coronavirus, Peyrouse said.

But Diana Serebryannik, a Turkmen dissident who fled the country in 2015, survived a stabbing attack in Moscow in 2016, and who leads the human rights organization Rights and Freedoms of Turkmen Citizens, told BuzzFeed News that even that is changing now.

According to doctors treating COVID-19 patients who were interviewed by members of Serebryannik’s group for a new report published Thursday, the government is instructing them to not diagnose pneumonia, as well, after a spike in cases and ahead of a planned visit from World Health Organization (WHO) officials. (Meanwhile, Chronicles of Turkmenistan, a group that monitors the Turkmen news media, reported that authorities had ordered coronavirus patients to be moved to remote hospitals to hide them from WHO officials.)

Serebryannik said that doctors and nurses she has spoken with across Turkmenistan told her they are barred from even saying the word coronavirus and were recently banned from using smartphones in hospitals because officials “don’t want photos or videos [to leak to the media],” exposing the true nature of the situation.

The gag order doesn’t seem to stop there. Radio Free Europe/Radio Liberty’s Turkmen service, which has journalists in the country’s capital, Ashgabat, reported last month that people talking in public about the pandemic were being quickly whisked away by plainclothes agents.

Steve Swerdlow, a human rights lawyer and authority on Central Asia, told BuzzFeed News that Turkmenistan “is intent on hiding the reality and it’s not working.”

Reports and whispers inside the country are beginning to spread in outlets like RFE/RL’s Turkmen Service and through word of mouth as quickly as people are becoming infected with the coronavirus.

“These aren’t just cracks that are showing, these are gaping holes in the narrative,” Swerdlow said.

A tightly-controlled police state that could be called a sort of North Korea-lite (Reporters Without Borders even ranked it worst in the world for press freedom last year, replacing North Korea), Turkmenistan, with a population of roughly 5.6 million people, rarely makes headlines and when it does it’s usually because of Berdimukhammedov’s latest antics, many of which John Oliver once featured in an episode of Last Week Tonight.

Those antics include but are certainly not limited to: setting absurd Guinness World Records; rapping about the nation’s revered Akhal-Teke horses with his grandson; firing a pistol while riding a bicycle; throwing knives; sinking improbable foul shots; deejaying techno festivals; and cutting donuts on the edge of a burning natural gas pit known as the Gates of Hell to dispel rumors of his death.

What Berdimukhammedov is not known for is caring much about the well being of the Turkmen people. Still, he seemed to at least acknowledge the risk of the coronavirus by taking some steps to stem the spread of it. In fact, he was quick to ground flights coming from China, which purchases gas from the country, and other Asian nations before closing Turkmenistan’s borders entirely. International flights were redirected to an airport outside of Ashgabat and passengers on their flights who displayed symptoms were forced into quarantine. (There were reports, however, that some passengers were able to avoid the quarantine by paying bribes between $100 to $150.) The government barred foreign nationals from entering the country and restricted movement within its borders, as well. And schoolchildren are reportedly being taught about the importance of personal hygiene, especially washing their hands with soap.

But critics and journalists say the virus was likely to have already found its way inside the country before many of these measures were put in place. In early March, RFE/RL’s Turkmen Service reported that several confirmed cases of the virus had been detected by medical staff at a hospital near Ashgabat.

The irony in Berdimukhammedov’s coronavirus denials, said Swerdlow, is that his cult of personality is particularly tied to health and fitness — something the leader has rapped about. “He’s a physician, as we understand — he’s a dentist,” Swerdlow said of Berdimukhammedov, who is 62 and has ruled as president since 2007. “I think this only adds to the absurdity and the tragedy of what he’s doing to his people with these mass public events and outright — active, we can call it — disinformation that is being used.”

Berdimuhamedov, who is also the author of several books about herbal medicine, recently recommended to the Turkmen people that they burn the herb harmala, much like you might smudge sage in your home, to ward off viruses that are “invisible to the naked eye.”

State workers quickly heeded that advice and began smudging schools, government offices and even cemeteries, according to RFE/RL’s Turkmen Service.

Some countries and international organizations like the United Nations have made efforts to help Turkmenistan cope with the coronavirus even though it hasn’t yet officially recognized its presence in the country.

In March, Russia sent the country hundreds of testing kits while the US State Department provided it $920,000 in health assistance “to help prepare laboratory systems, activate case-finding and event-based surveillance, support technical experts for response and preparedness, bolster risk communication, and more.” 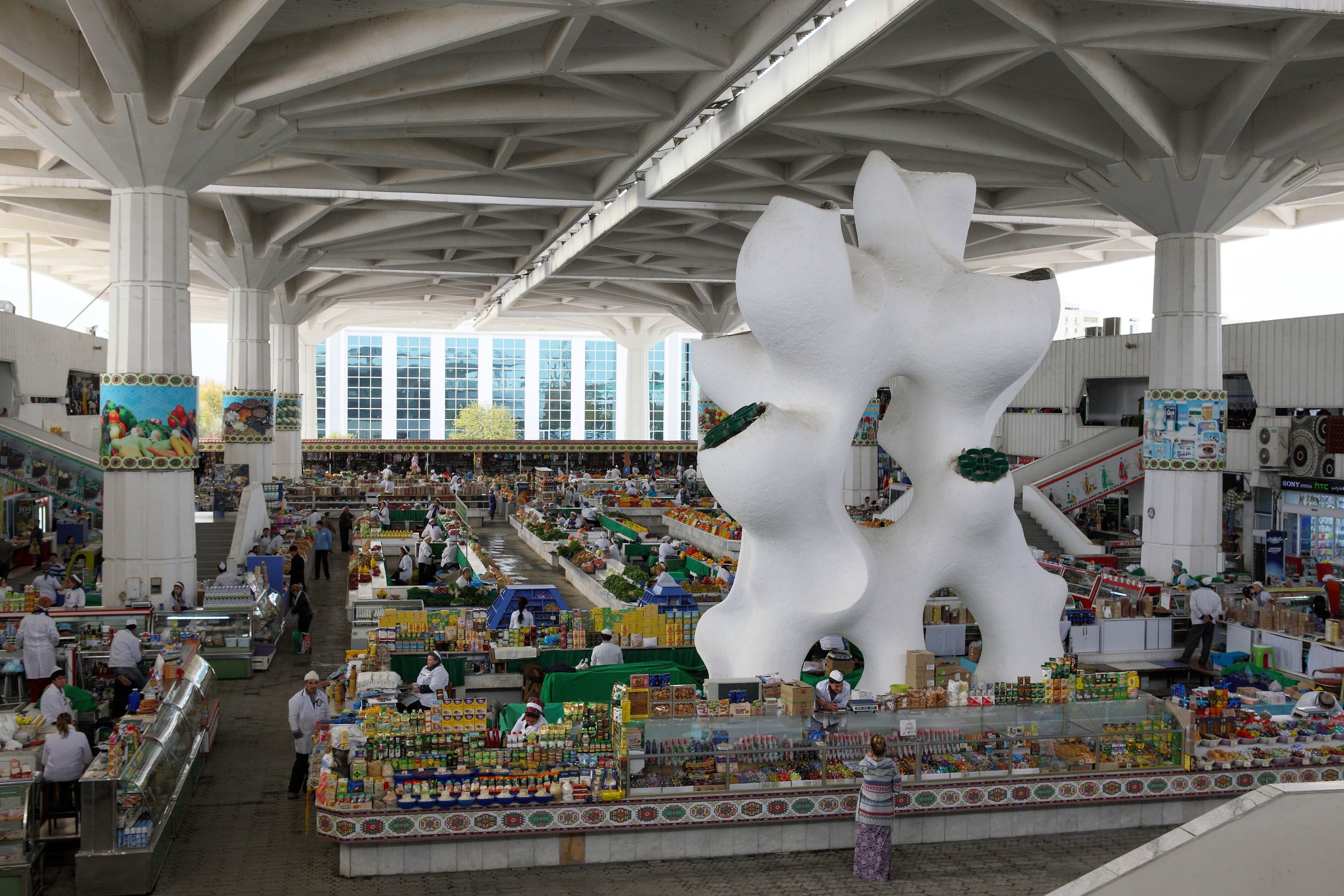 But Swerdlow said those supplies may not be getting into the right hands. He said he has been collecting reports in Turkmenistan and Tajikistan, where the US also delivered about $866,000 in health assistance, that doctors in both countries are being intimidated and pressured to buy the equipment themselves out of their small paychecks.

“When doctors complain or nurses complain that they can’t afford this, some of them are intimidated and told they can be fired if they don’t pay for this out of their own pocket,” Swerdlow said. “There appears to be, as usual, a lot of corruption involved” with the US assistance.

In a statement to BuzzFeed News, a State Department spokesperson justified the health assistance to the countries, saying, “Given the nature of the disease and its spread around the world, it appears likely that no country will be able to avoid it altogether.”

The spokesperson said the US has safeguards in place to ensure the assistance reached those it is meant for.

“No US government funding goes directly to the governments of any country in Central Asia. The private sector firms and non-governmental organizations that implement US government-funded activities are selected through a rigorous procurement process,” said the State Department spokesperson. “USAID is committed to ensuring that American taxpayer dollars are used wisely, effectively, and for their intended purpose every place we work.”

“USAID has an extensive contractor oversight program,” the spokesperson added.

Even with US assistance, if a substantial outbreak does occur in Turkmenistan, it is likely to be devastating.

Swerdlow said the healthcare system of Turkmenistan, a country already in deep economic crisis before the pandemic, has been “decimated after years of neglect.” As a result, Serebryannik said, hospitals there are unequipped to handle a potential flood of COVID-19 patients, with an extremely limited supply of Personal Protective Equipment (PPE), ventilators and oxygen

Peyrouse had one word for what the outcome would likely be: “disaster.”

One group of people in the country at great risk of becoming infected is the prison population, among which are hundreds of political prisoners, including government critics and journalists.

“There’s this list of disappeared prisoners,” Swerdlow said. “Maybe 100 people have not been accounted for for almost 20 years.” Human rights groups have pushed a campaign called Prove They Are Alive to try to get Turkmen authorities to provide information about them.

“Conditions in the prisons are abysmal,” Swerdlow said, adding that political prisoners have had no access to international health organizations while in custody. “It’s of the utmost importance that there be some international pressure to release these prisoners.”