Australian businesses starved of skilled workers could recruit from a pool of more than half a million job-ready women, but only if the next government invests in better childcare, improves access to paid parental leave and drives higher wages in critical industries.

As Prime Minister Scott Morrison and Opposition Leader Anthony Albanese clash over how to drive up pay packets in the face of sharply rising inflation, new research shows a solution to the nation’s skilled worker crisis could already be here. 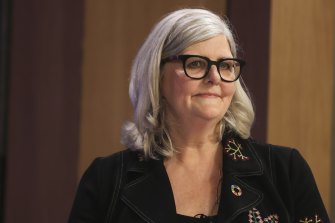 The study conducted for Chief Executive Women by independent firm Impact Economics has found halving the wage gap between men and women could fix the current skills shortage and create the equivalent of 500,000 additional full-time jobs.

The report found that going further and entirely closing the wage gap would add an extra 1 million full-time equivalent workers with post-school qualifications, giving Australian businesses smashed by border closures and the lack of international students the chance to find staff.

Chief Executive Women’s president Sam Mostyn said women are the country’s “most untapped resource”, and investing in policies such as higher wages and better childcare would boost their participation and bring huge economic rewards.

“It’s worth hundreds of billions into the economy if you get this right,” she told The Sydney Morning Herald and The Age.

“In this uncertain time, we need to utilise every available resource and act quickly at scale and have confidence in the long-term payback.

“We are facing record job vacancies and growing skills shortages, yet we have a ready workforce, which is highly educated and skilled that is sidelined by powerful barriers to their participation.”

There are currently 425,000 job vacancies across the country. The National Skills Commission has projected that over the five years to 2026 the economy will require an additional 1.2 million jobs, with female-dominated industries experiencing the biggest increases – including healthcare and social assistance, education and training, and accommodation and food services.

Chief Executive Women, which is a member organisation of more than 800 female leaders in business and not for profits, wants the childcare subsidy increased to 95 per cent for all low-income households, up to $80,000. Over time, the group wants to build towards universal access to early childhood education and care with a minimum of three days a week for families who need it.

Labor’s childcare policy would cover the cost of up to 90 per cent of childcare for families earning up to $530,000 per year, while the Coalition’s system, which is currently in place, benefits those earning up to $354,000 per year. Labor’s policy is estimated to cost $5.4 billion over four years.

Mostyn said it wasn’t about how much those changes cost but rather the economic benefit they would bring.

Albanese on Monday said he had “practical plans” to boost productivity and lift wages, after questioning Morrison on the minimum wage in Nine’s Great Debate on Sunday night.

“I got two questions to the prime minister. One of them I thought was pretty easy, which is ‘should people be paid the minimum wage?’ And you know, he said ‘it depends’. He couldn’t even say that Australian workers should be paid the minimum,” Albanese said on Monday morning.

“Our objective is to have real wage increases and we have practical plans to do that.”

Morrison said wages would rise as unemployment went down. The unemployment rate is at 4 per cent, which is equal to 50-year lows.

“Businesses can make wages go up. When businesses are doing well and when unemployment is going down, then wages go up. That is how it works. That is exactly what the Reserve Bank Governor was saying,” Morrison told reporters.

“At a time of critical skill shortages, Australia’s failure to keep pace with our international peers in terms of women’s economic participation is hurting our economy,” she said.

“Reforms to lift female participation are urgently needed to lift our game to meet current and future skill gaps.”