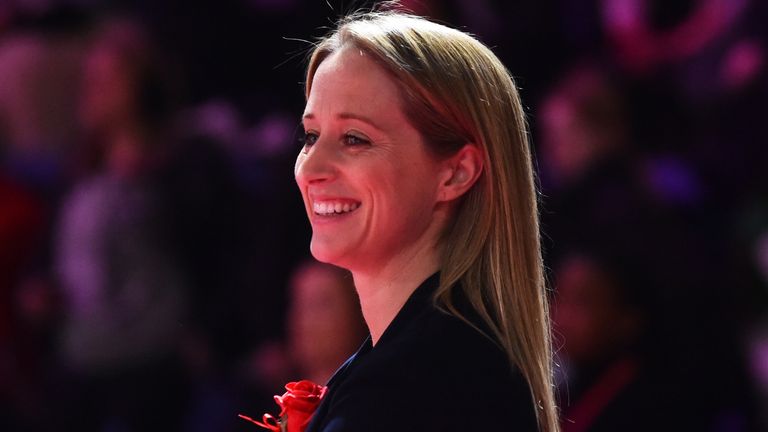 England Roses head coach Jess Thirlby, Dr Layla Guscoth plus Alicia and Paul Scholes will all be joining The Netball Show on Wednesday at 2pm.

The show, which will be live on Sky Sports News and Sky Sports Action, will be presented by Di Dougherty with Tamsin Greenway and Caroline Barker sharing their expertise throughout.

Despite all three of the major domestic competitions – the Vitality Netball Superleague, Suncorp Super Netball and the ANZ Premiership – being on hold right now, there’s still a wealth of netball news to discuss.

The team of Dougherty, Greenway and Barker, will be first joined by England Netball’s head coach and Thirlby will be lifting the lid on what it’s like to the Roses’ head coach now and how she’s staying connected with her players and wider team.

At the start of the 2020 Superleague season, Alicia Scholes was announced as one of Manchester Thunder’s training partners. The mid-courter joins the show alongside her father, Paul, who knows just what it’s like to reach the top and stay there after his long successful career at Manchester United.

Back in February last year, Paul shared his views about netball live on Sky Sports while watching Thunder take on Pulse. As a well-versed netball dad, and an elite sportsman, hearing more of his insights will be fascinating.

? “I think that people probably have the wrong idea about netball, that it’s a bit of a ‘girly’ sport but it’s not. It’s so physical.”

A former Thunder player and now a key member of the NSW Swifts, Helen Housby joins from Sydney. The shooter allows us to find out what life is like over there and gives an update on her international future!

Guscoth swapped Adelaide for England at the end of March. The qualified doctor, who was about to return to on-court training after painstaking rehab from an Achilles injury, has put netball to one side for the moment.

Instead, she has been on the frontline at the Queen Elizabeth Hospital in Birmingham and Guscoth joins The Netball Show to share what life has been like since her return from Australia.