Glasheen, 76, has been living on Restoration Island off the coast of north Australia since 1997 after losing his wealth. He moved there with a suitcase containing ‘three shirts, two pairs of shorts and swimmers, a decent torch, a couple of books, a jar of chilli powder, some toothpaste and my toothbrush’.

The quirky hermit, who wished to ‘escape Big Brother’ and the ‘weight of modern life’, told MailOnline Travel he has an essential list of things that enable him to enjoy life in isolation, including a solar-powered internet connection, a stockpile of good books and two mannequins (Miranda and Phyllis) for company while he strives to find a ‘nice lady’. 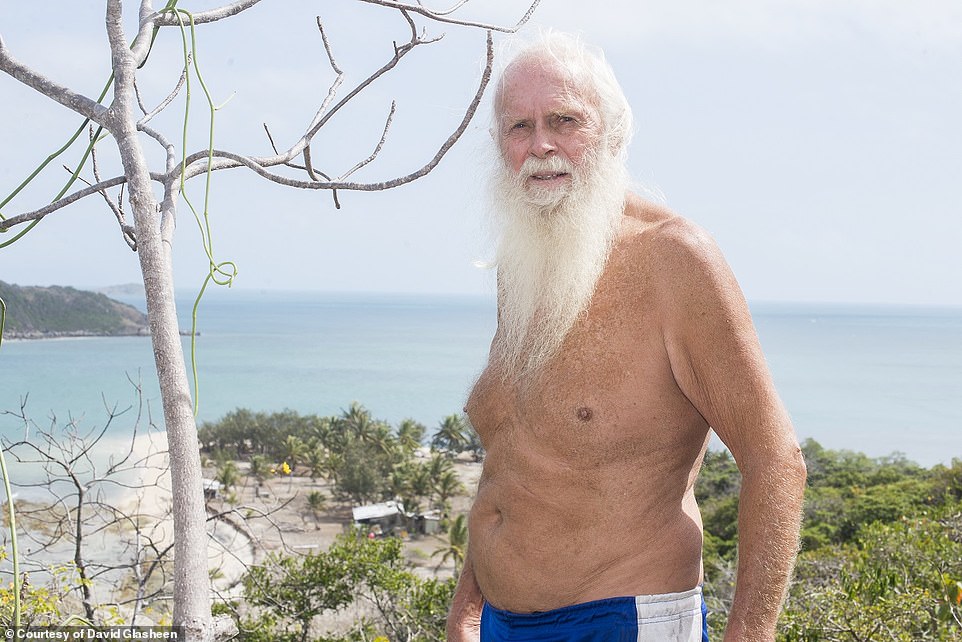 David Glasheen, 76, has been living on Restoration Island off the coast of north Australia since 1997 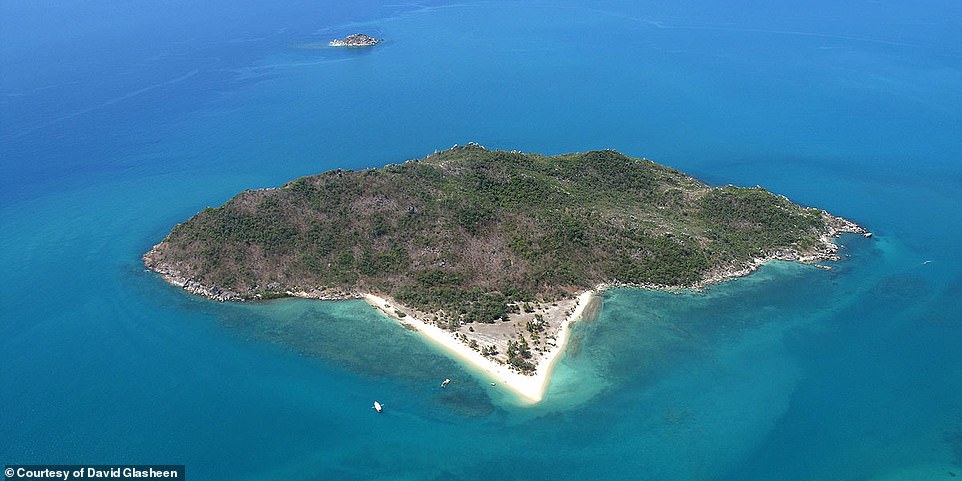 But love aside, the most basic of Glasheen’s needs are water and food.

For drinking, he collects rainwater and water also comes from a catchment in the hilly areas of the island.

He says food is easier to get, with the ocean ‘containing all the protein’ he needs.

For that reason, fishing tackle, a cast net for catching bait, a flintstone for lighting a fire and a bush knife are among Glasheen’s essential items.

‘It’s like living in Jurassic Park,’ he says of his hunter-gatherer exploits. 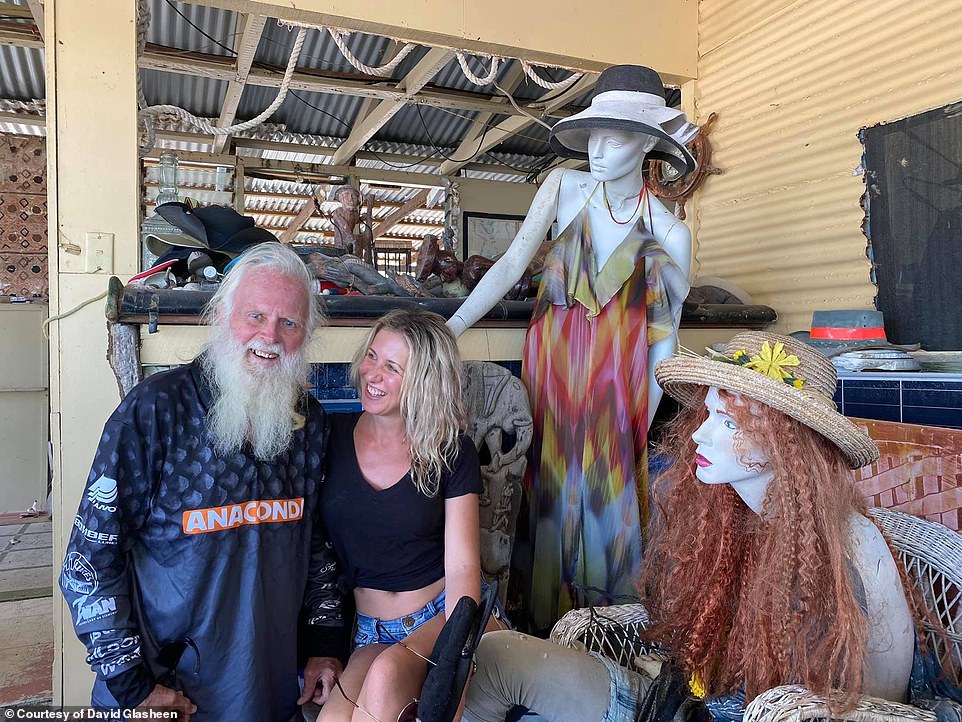 Glasheen with a friend and his two mannequins, Miranda and Phyllis 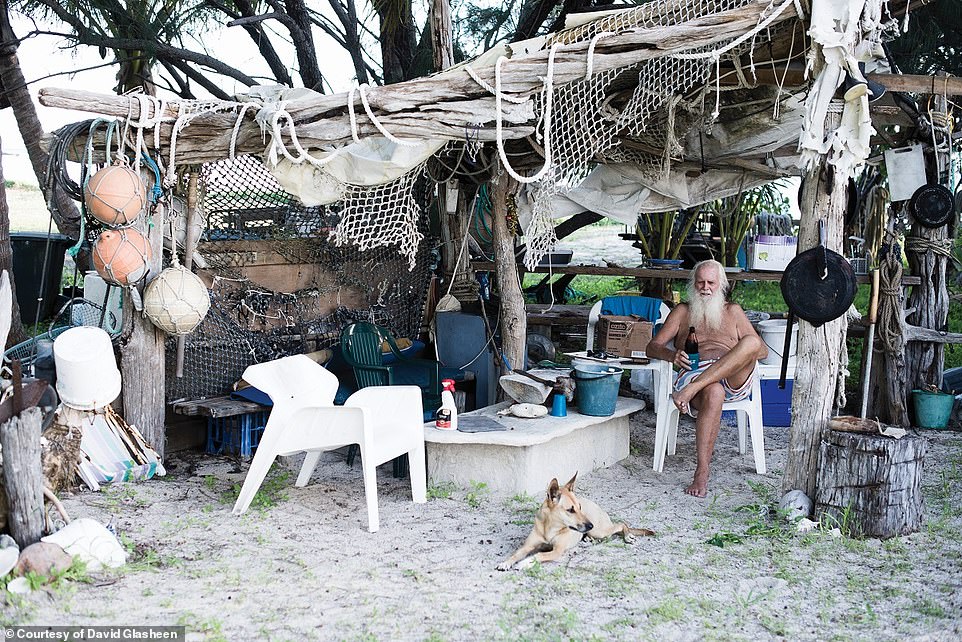 Glasheen at the bar he built on the island with his trusty dingo, Zeddi 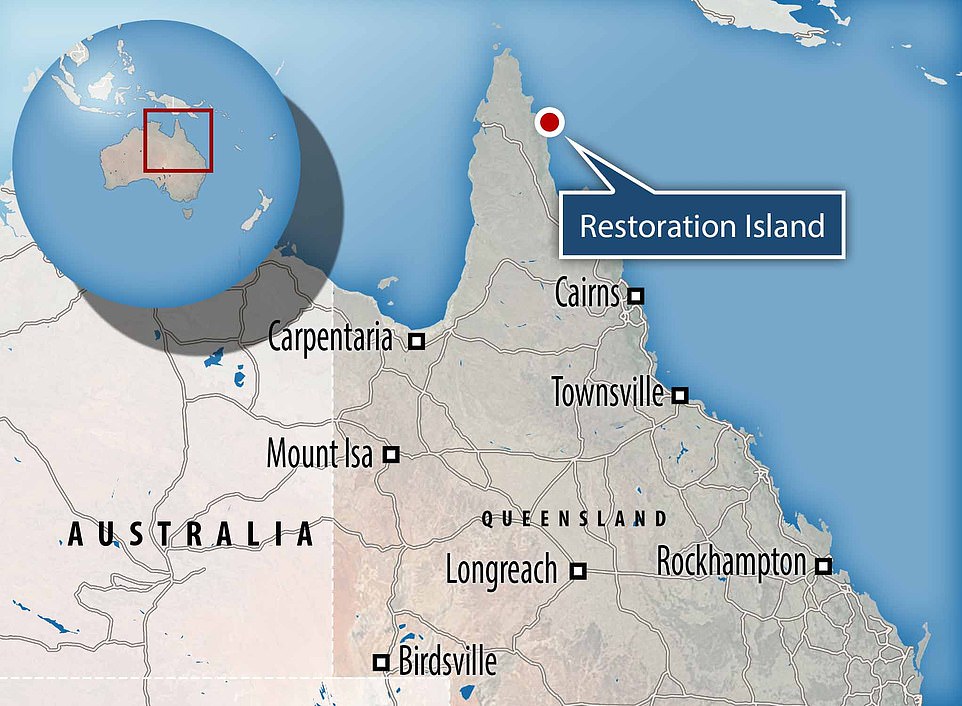 1. Make sure you have a good supply of fresh water

2. Have a backup generator for power or have a supply of fuel or solar power

3.  Get a medical kit and a basic set of tools to fix things

4. For fishing, you will need tackle and a cast net for catching bait

6. Keep your personal hygiene in check and purchase soap, toothpaste and toilet paper if possible

7. Pack a collection of books and board games

8. Get a home beer brewing kit so you can enjoy an alcoholic beverage

9. Have a spare set of reading glasses in case you lose or break your current pair

10. Stash some silver coins, as money might come in handy and these will probably appreciate in value

11. A companion is good. I’m on the hunt for a nice lady but my two mannequins are good for the moment

Other foods that are abundant on Restoration Island, or Resto as Glasheen fondly calls it, include coconuts, acidic beach almonds, bush cherries, native capers and wongai plums.

The islander also has a stockpile of tinned and dried goods, which he picks up on an annual grocery shopping trip to Cairns using a small boat.

Other things Glasheen stocks up on while on the mainland is a range of household goods including soap, washing detergent, toothpaste and toilet paper, so he can keep his personal hygiene in check.

Alcohol also makes it on to the survivalist’s shopping list.

He likes to keep a basic range of spirits and wine in the bar he built on the island for when he is entertaining guests.

For beer, he has a home brewing kit.

On the entertainment front, Glasheen has some traditional board games and he enjoys reading.

He says it’s ‘always important to have a spare pair of reading glasses’ as losing the ability to read would be pretty miserable.

Another thing Glasheen recommends stashing away is a bag of silver coins.

He notes: ‘On occasions, you might need money. Silver coins are easy to store and they will probably appreciate in value, too.’

Lastly, Glasheen emphasises the importance of companionship when living in isolation.

He can keep in touch with the outside world via a solar-powered internet connection, but it’s not quite the same as human interaction.

Before moving to Restoration Island – named by Captain William Bligh of Mutiny on the Bounty fame because the provisions he and his crew found on it in May 1789 restored their spirits – he was leading a high flying city life in Sydney with his wife and two children.

But after the infamous Black Tuesday event in 1987, the businessman lost his wealth and the bank foreclosed on his property with his wife leaving him shortly after.

He moved to the island with his then partner Denise, but after she gave birth to their child she decided to relocate, saying the island life was not safe for a newborn baby.

In 2008 Glasheen took to online dating to try and find a new flame but 12 years on, he is still seeking the perfect castaway companion.

In the meantime his has his two ‘mannequin girlfriends’ and numerous animals for company, including his trusty dingo, Zeddi.

He also gets visitors from time to time and TV crews have stayed on the island to film shows such as the Channel 4 series Mutiny, with former commando Ant Middleton.

Glasheen first visited Restoration Island with a former business associate in the early 1990s and says it was ‘love at first sight’.

He writes in his book, The Millionaire Castaway: ‘Resto had affirmed my commitment to find a different way of life: one beyond the vicious cycle of pressure to earn enough money for a lifestyle by which other people measure your value and success. 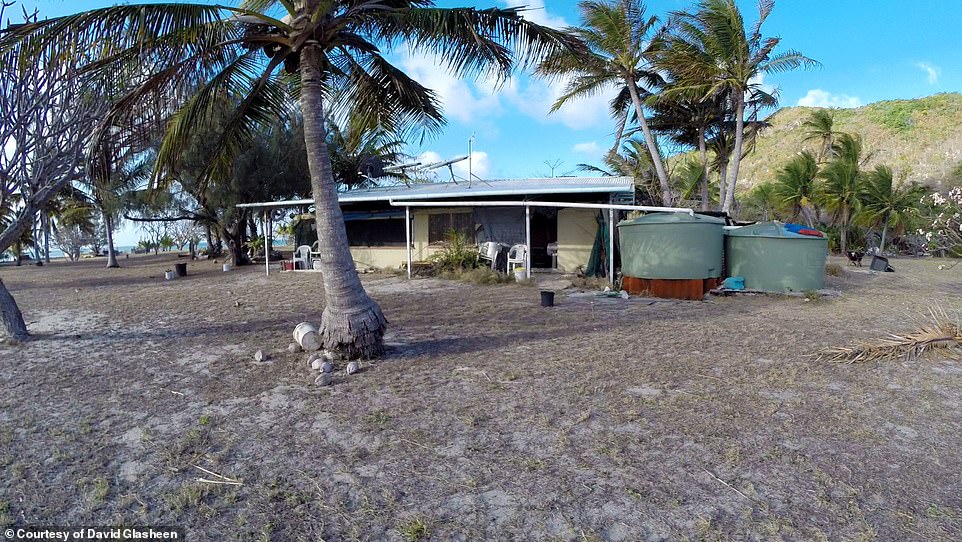 A shot of Glasheen’s home on the island, complete with two storage containers that collect rain for drinking water 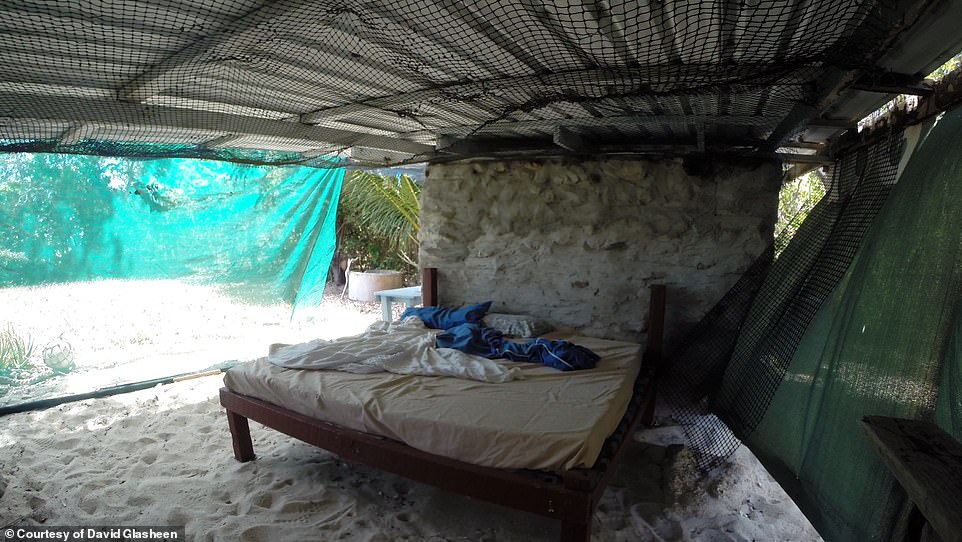 Glasheen says life on the island is ‘peaceful, safe and fulfilling’. Above, his bedroom, which has a castaway-style sand floor 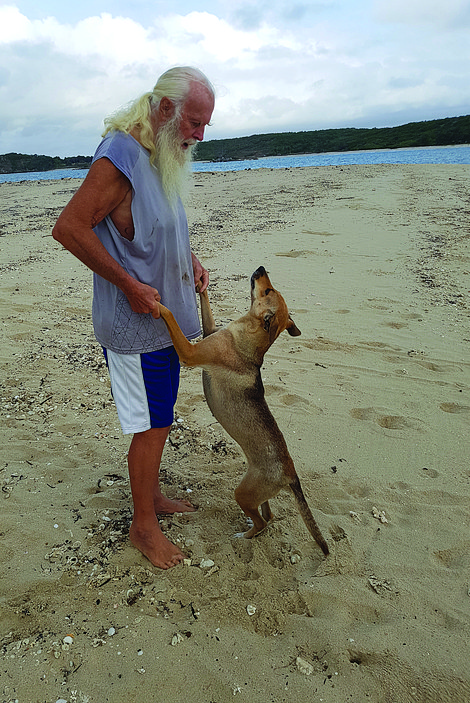 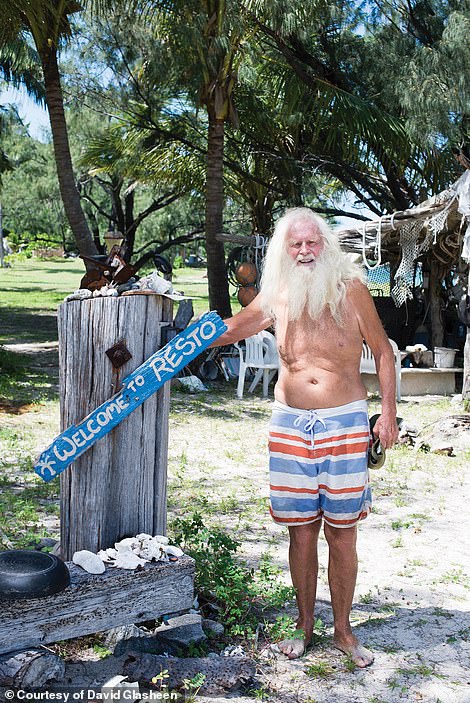 ‘I couldn’t bear the thought of this place being a rich man’s playground. This short time on the island had convinced me that Resto was somewhere I could live in utter contentment. Spending the day fishing and the night yarning was my idea of bliss.’

Glasheen leased a portion of the island from the Australian Government for £13,000 a year on behalf of a consortium of businessmen.

The 43-year lease required Glasheen and a business partner to develop fishing facilities and tourist accommodation valued at a minimum of £131,000 on the island, a condition that they failed to satisfy. 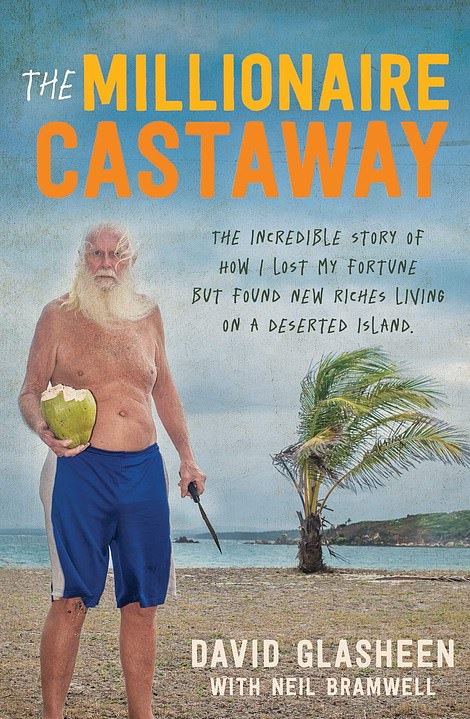 As a result Glasheen was taken to court, with the judge ruling against him.

He remains on the island, but he could be evicted at any time and describes himself as being a ‘squatter in my own home’.

For other aspiring castaways, Glasheen notes: ‘Start learning about how to be independent and survive on very little.

‘I grew up this way and I loved it. I read books and watched movies that covered survival topics.

‘Just start by going camping. You will soon find out what you really need versus what you think you need.  Life here is peaceful, safe and fulfilling.’

Commenting on his hopes for the future, Glasheen concludes: ‘I really hope that one day Resto island becomes a healing and inspirational non-profit retreat operated in partnership with the Kuku Yau people who are the “traditional” owners of this land.

‘I also hope my family become involved as well to carry on my legacy.’

As for the ongoing coronavirus crisis, Glasheen describes it as a sad situation and a test for world leaders.

He says: ‘Every day is a good day here, but I feel really sad and disappointed about the current global situation.

‘It was fairly obvious that something like this would happen at some point but no one much out there is “prepared” for a really rainy day.

‘In Australia, we are better used to natural disasters like droughts and bush fires.

‘Right now the world is very exposed and it’s a test in how effective our leaders really are.’

David Glasheen’s book The Millionaire Castaway is out now and available for Kindle.