Jellyfish the size of dustbin lids and swimming through tiger shark territory – at night: The intrepid marine biologist who travels to the remotest spots to study astonishing creatures

Think of a scientist and a lab-coat-wearing bod staring at a petri dish tends to spring to mind.

Dr Mike Gil is a living reminder that being a scientist can also involve adventuring in some of the earth’s most remarkable and remote spots – amid some of its most astonishing creatures.

Mike, 34, you see, is a marine biologist and while, yes, his job does involve a fair dollop of non-adventuring, for around three months of the year he’s like an aquatic Indiana Jones, exploring exotic marine realms to find out how humans affect its ecosystem treasures. 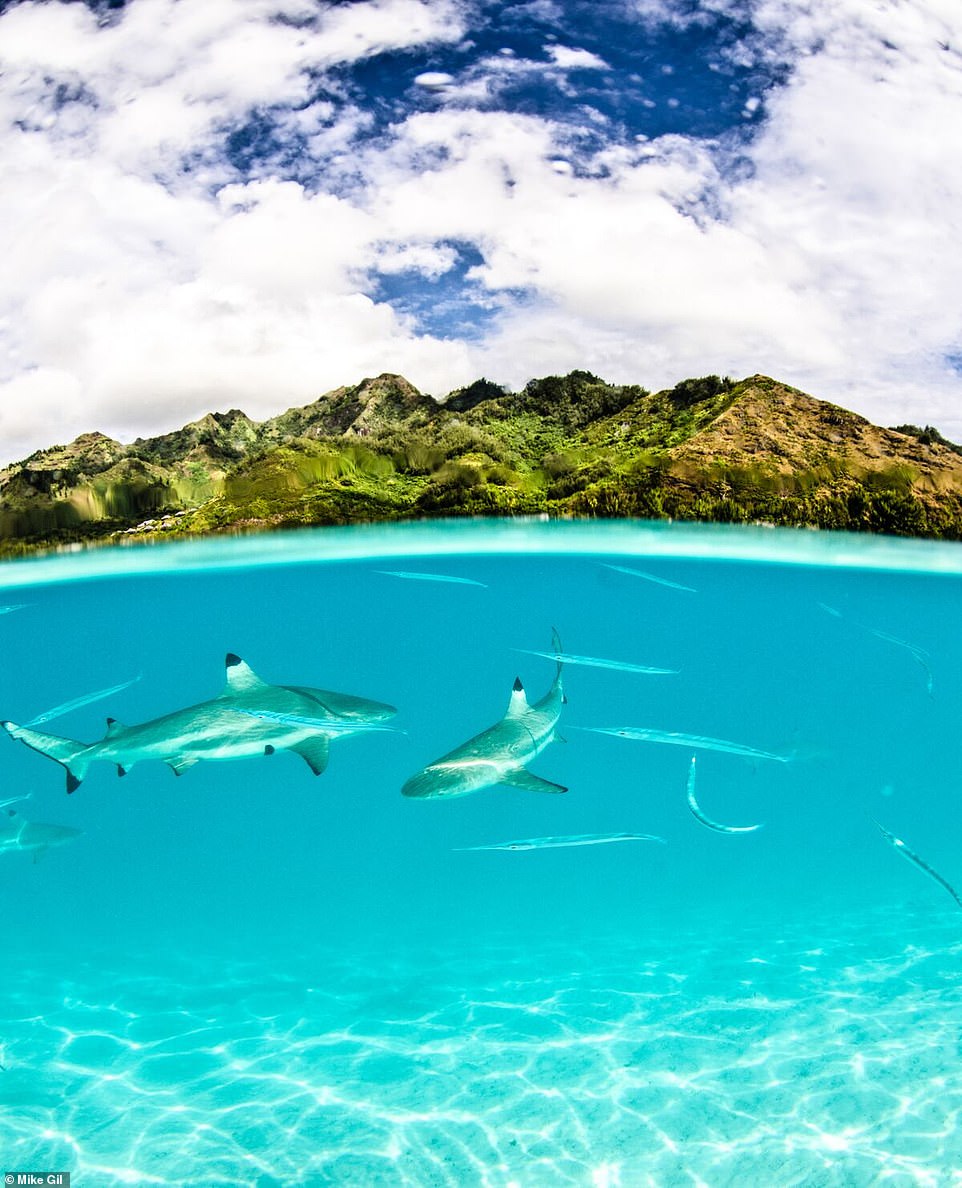 Fancy a dip? This stunning photograph shows what lies underwater around the coast of Moorea in French Polynesia – blacktip reef sharks, for starters

Paradise found: A stunning panorama of Moorea, which was an ‘office’ for Mike recently

He’s come face to face with jellyfish the size of dustbin lids, watched courting whales, swum across tiger shark territory – in inky blackness – and visited a fair few paradise islands, Maiao and nearby Moorea in French Polynesia, for example.

He’s a postdoctoral research fellow at the University of California, Santa Cruz, but also, perhaps not surprisingly, a National Geographic Explorer.

Maiao, he told MailOnline Travel, is one of the most remote places he’s visited.

He said: ‘It’s a tiny unspoiled tropical paradise with a few hundred residents. Visitors are so infrequent, that when my colleagues and I arrived on the island to survey the surrounding coral reefs – we were studying an outbreak of a coral-killing snail – the island’s mayor and his whole family greeted us, unexpectedly, with a picnic. It was heartwarming, but became problematic while diving.’

The island, he reveals, is possibly his favourite location – a ‘contender that’s nearly impossible to beat’.

Not all visits to paradise are quite as serene, though.

Mike’s wife, Heather Hillard, is also a marine biologist and they led a joint expedition to Thailand last summer – one that became enveloped in drama extremely rapidly.

When they touched down in Thailand they realised one of the islands they were going to was closed to visitors. Local businesses told them they could get to the island if they left straight away, so they did. 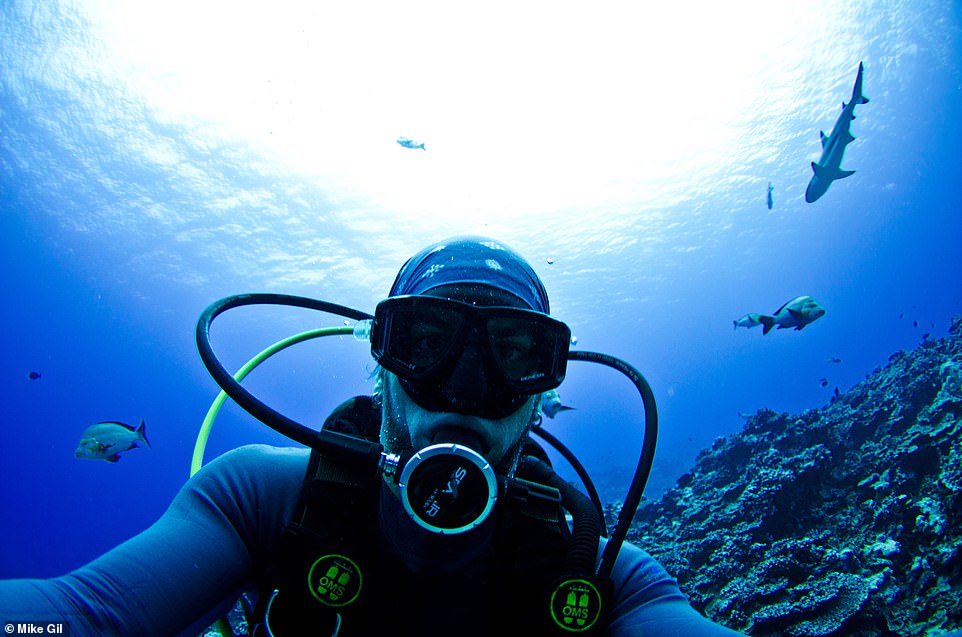 He’s behind you! Mike dives into the deep and stops to take a daring selfie with a shark

However, Heather was suffering from food poisoning and so did not enjoy the five-hour car ride and one-hour boat ride to the island.

When they arrived, Heather ran off to be violently ill and Mike helped the driver haul their 135kg luggage two kilometres across the beach to their accommodation – they were staying in a bungalow with elderly Thai hosts.

The low tide stopped the driver from pulling up to shore, so they trekked across the thin sand, carrying their bags overhead when parts of the beach became submerged in water.

Mike said: ‘By the time we’d finished, my shoulders were cut up from the bag straps, and we were beat. I tipped our driver heavily – as you do in such circumstances – and he thanked us profusely before departing.’

Their hosts were the only people around as far as the eye could see.

Since their tiny rustic bungalow was right by the water Mike went for a snorkel while Heather rested in the bungalow. 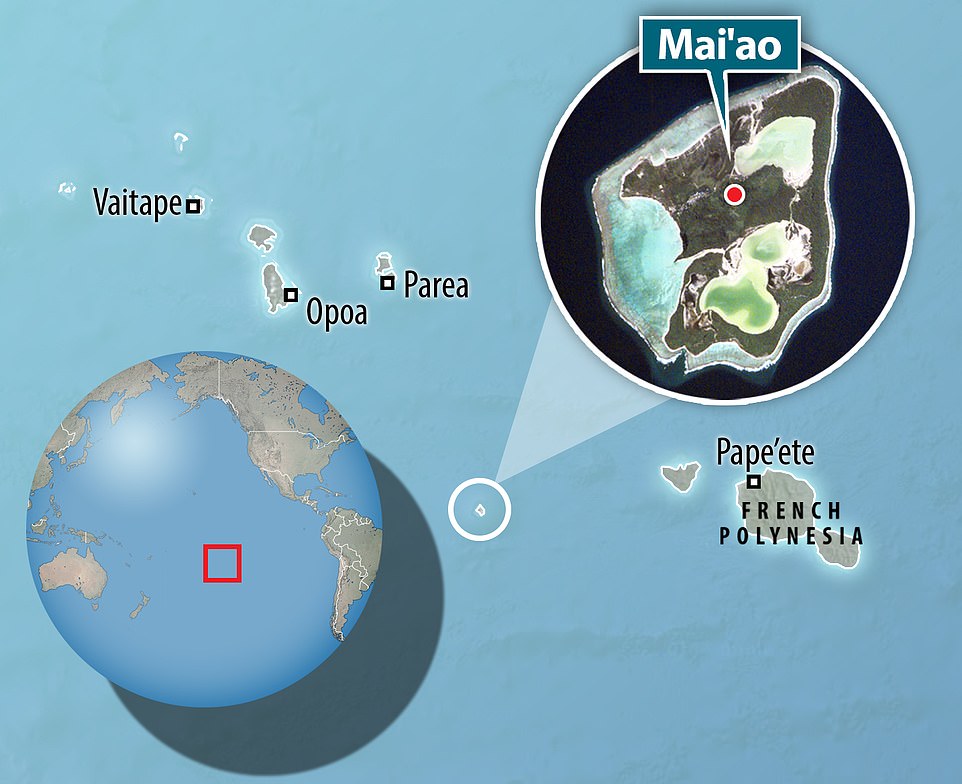 Maiao (also Mai’ao), Mike told MailOnline Travel, is one of the most remote places he’s visited

The sea, to Mike’s delight, was teeming with fish and coral, a splendid reward after a hard journey.

Heather wasn’t having such a great time, though. She saw a giant rat crawl out of their bags with a granola bar it had found.

Mike continued: ‘Our Thai hosts showed up quickly, laughed a fair bit at the situation, violently killed the rat in the bathroom, and then went about their day. To Heather’s horror, the bathroom was covered in blood when she returned. When I got back from the snorkel, Heather wasn’t a happy camper.’

That night a ‘terrifyingly loud thunderstorm’ hit and they thought the ocean was going to ‘swallow the bungalow’.

The reef protected them, but the roof eventually gave way and a small waterfall fell into their room.

They moved to a different bungalow the next day. 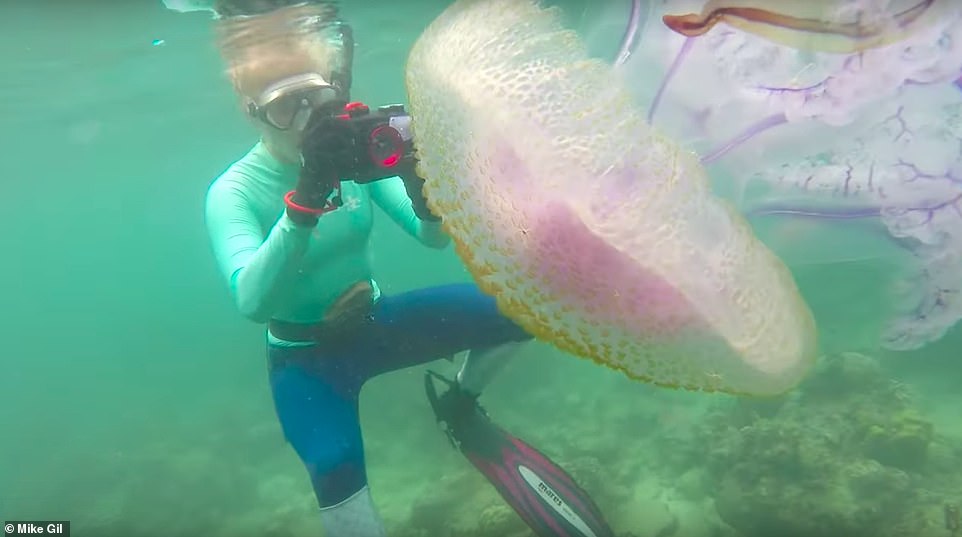 Mike said that this enormous jellyfish, in the Gulf of Thailand, was one of the most amazing creatures he’d ever had a close encounter with

He said: ‘One of the strangest animals I’ve seen has to be a totally massive jellyfish – over a-foot-and-a-half wide [dustbin-lid sized] – that I nearly swam into by accident, while collecting data on fish behaviour in a remote coral reef in the Gulf of Thailand.

‘The jelly was pushed nearshore by a big storm the night before. What made this encounter so memorable wasn’t just the size of the alien creature, but the fact that it had, living atop and within it, a whole ecosystem of critters — hitchhikers, ranging from small crabs and brittlestars, to an entire school of juvenile fish. What’s better than a free ride that provides structural defences in the form of massive stinging tentacles?’ 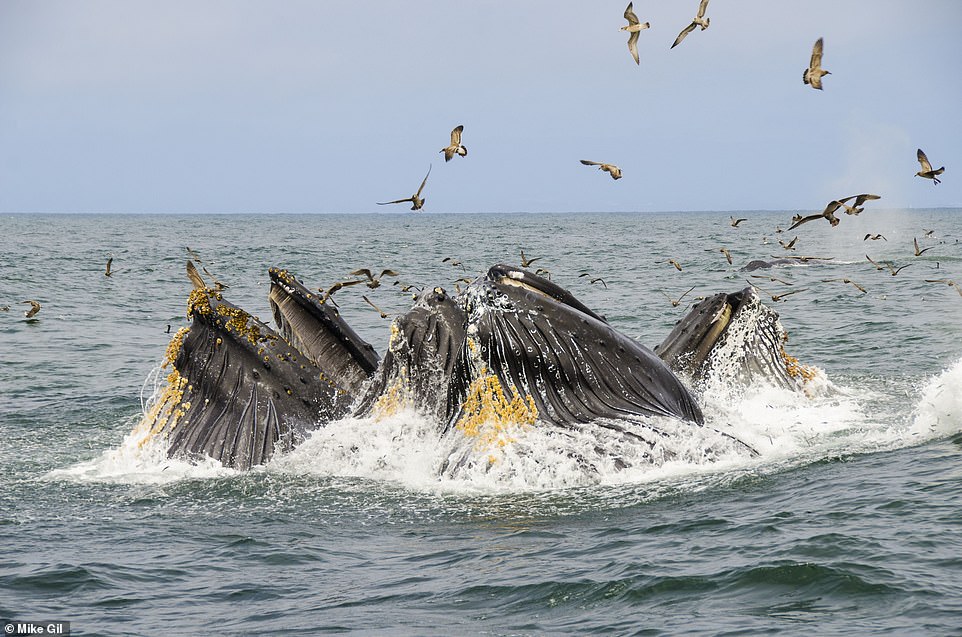 Dinnertime: Mike took this amazing shot of a quartet of humpback whales ‘lunge-feeding’ on anchovies as birds swoop around in the hope of picking a few tit-bits

He’s had a few shark encounters, too – and even bravely swum across a bay he said ‘certainly could have contained tiger sharks’ in pitch darkness.

This wasn’t a swim he undertook out of choice, though. He did it after the engines on his boat died on the way back from a day studying coral reefs with a colleague.

The research station was within sight, but the receding tide was pulling the boat back out to sea, so a decision about whether to swim for it had to be made fast.

Recounting the story on a YouTube video, he says: ‘We jump in and each take a piece of the anchor line and wrap it around our shoulders and we team-swim the boat back. All you can “see” is pitch blackness. The swim felt like it took hours, but it was about 35 minutes. We were very relieved we weren’t a tiger shark snack.’

Mike’s favourite animals to work with are coral reef fish, such as parrotfish, rabbitfish and surgeonfish, better known as the ‘roving herbivores’. 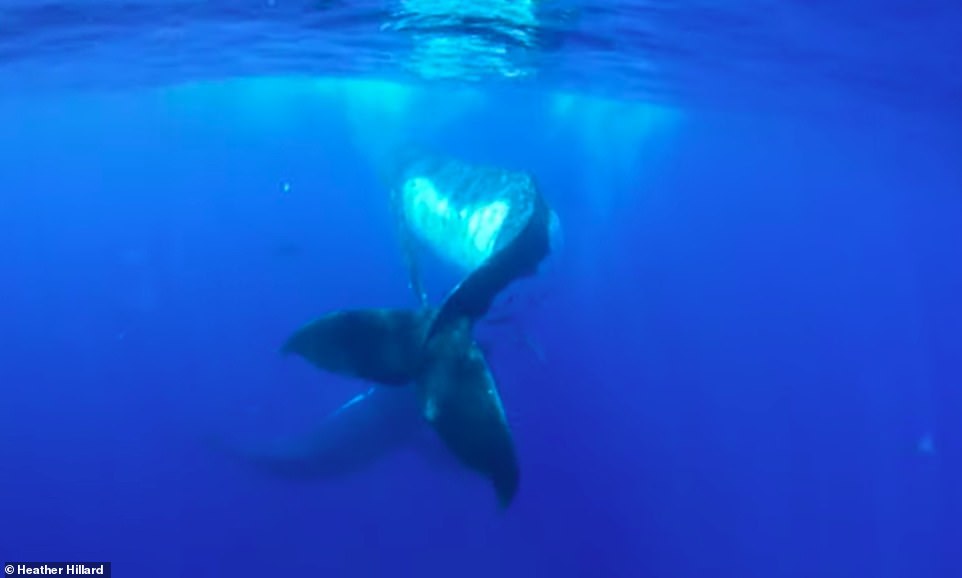 In Moorea Mike and his wife, Heather (who took this picture), witnessed two humpback whales courting – a very rare spectacle to see close up

He said: ‘They’re not only beautiful, quirky animals, but they serve a critical purpose: clean coral reefs of algae that can otherwise take over and kill coral reefs, especially when we humans add pollution and overfishing to the equation.’

Mike actually hated science when he was a child and started as a journalism major in his first year of university.

On a whim, Mike applied for a scholarship to take a field course on marine ecology on Lizard Island, in the middle of the Great Barrier Reef. He applied because he was interested in the island’s name, not because he had a clue about marine ecology.

When he arrived on the island, he quickly realised his 19-year hatred of science was misdirected and took steps to protect our wildlife. 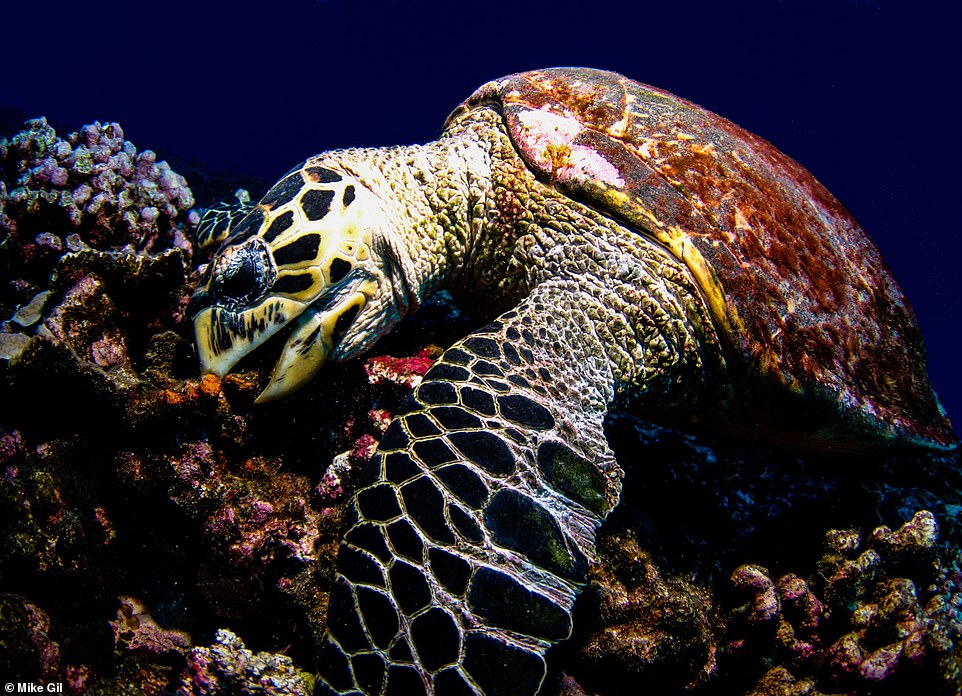 Mike said: ‘I learned, first hand, that it was an exhilarating process of discovery limited only by the creativity of the scientist. I also fell in love with coral reefs on that trip. When I got back, I changed my major, and the rest, as they say, is history.’

Mike’s lessons involve taking students into the field to show them how exhausting, challenging and rewarding the career is.

He took a group of students to Akumal, Mexico, for three weeks to show them marine research first-hand.

He said: ‘I’ve taken many students into the field that think they want to be marine biologists. Some leave this experience further validated – others realise that they had no idea what they were getting into!’

His students never expected how tiring and unpredictable the job would be.

They spent five months planning how they would conduct their research but had to adapt all their methodology as soon as they saw their surroundings.

But at the end of the trip his students were amazed to see their research come together and realise the impact of their work. 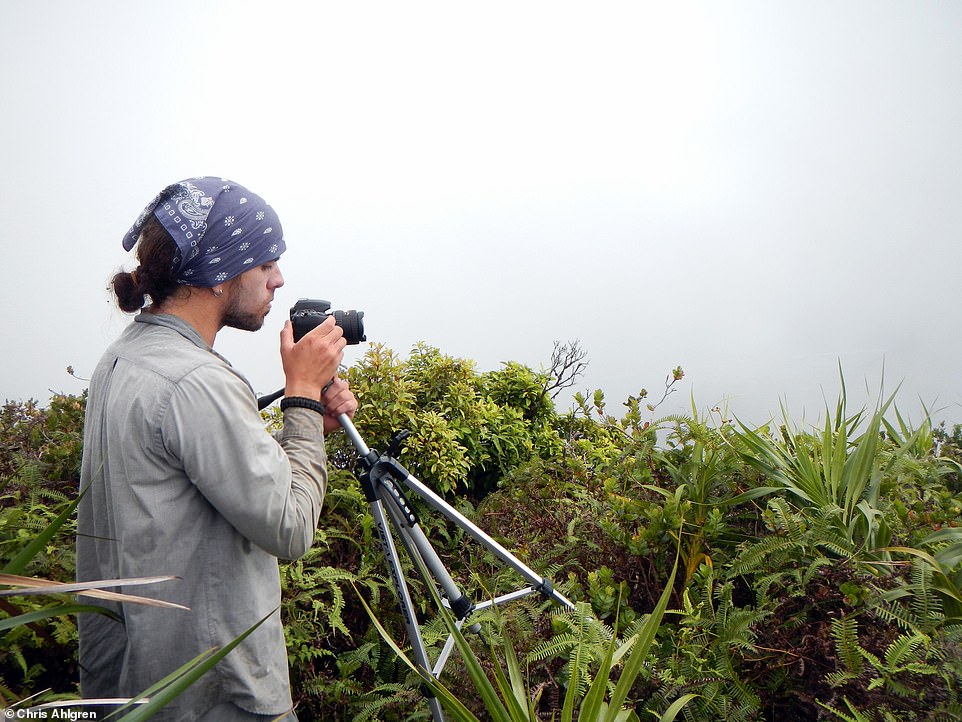 Climb every mountain: Mike comes up for air and explores the islands he visits every now and then, even taking on Moorea’s volcanic peak, Mount Rotui

Mike advises anyone interested in marine biology to get research experience first. It usually begins as an unpaid internship and gets better once you have your foot in the door.

Mike runs a YouTube channel and has given Ted talks to raise awareness about marine biology and share his incredible work with people.

He said: ‘I get to dream up ideas and make discoveries that have the potential to help humanity. I also get to spend an inordinate amount of time in remote corners of the natural world, offering me sights and experiences that I could have only dreamed of as a kid.’

For more about Dr Mike Gil visit mikegil.com and you can find him on Twitter here. 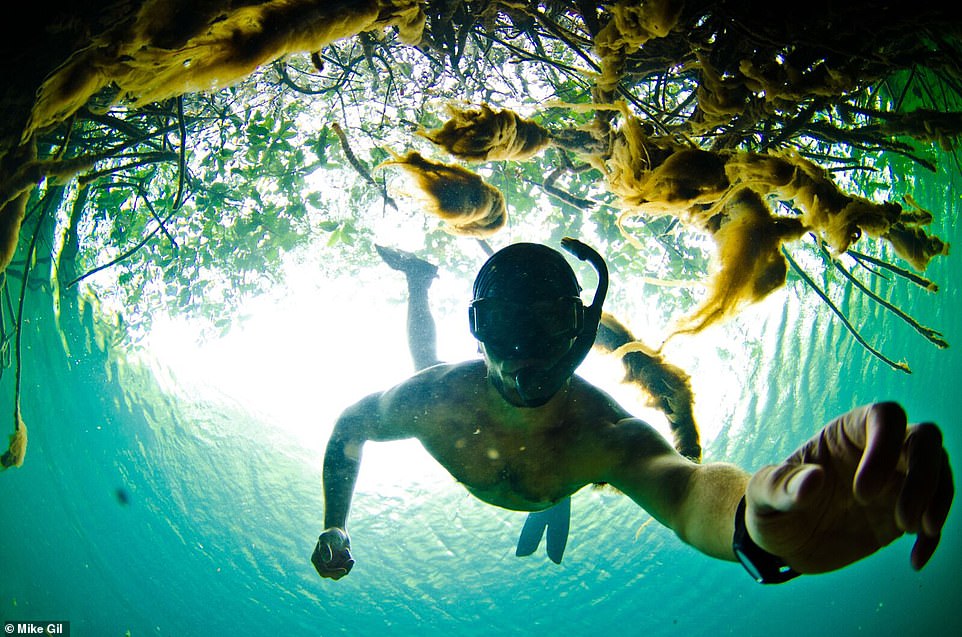 The ocean’s ‘forests’, or mangroves, are not dissimilar to what trees and grass look like above ground, showing how evolution brought us onto land. This mangrove selfie was taken in Akumal, Mexico