The Karen Millen comeback! As Kate Middleton joins Liz Truss, Jill Biden and Carrie Johnson in stepping out in the brand, how the ‘uninspiring’ high street name is enjoying a resurgence thanks to its ‘tailored, classic’ silhouettes

As the Princess of Wales wowed royal fans with a flash of colour in a bright yellow dress during a visit to a hospital in Surrey, she championed a favourite brand of hers – Karen Millen.

The high-end high street designer’s tailored silhouettes provide the perfect formal daywear for Kate, 40, as she carries out royal engagements – while at the same time allowing her to maintain a more down-to-earth image as she avoids wearing designer labels much of the time.

Today the mother-of-three stepped out in the Boohoo-owned label’s £220 structured ‘Forever’ crepe dress, which was belted at the waist with a full, pleated skirt.

The Princess of Wales, 40, wore the ‘Forever’ crepe Karen Millen dress, which she accessorised with navy shoes and a clutch bag, as she attended the Royal Surrey County Hospital, Guildford today 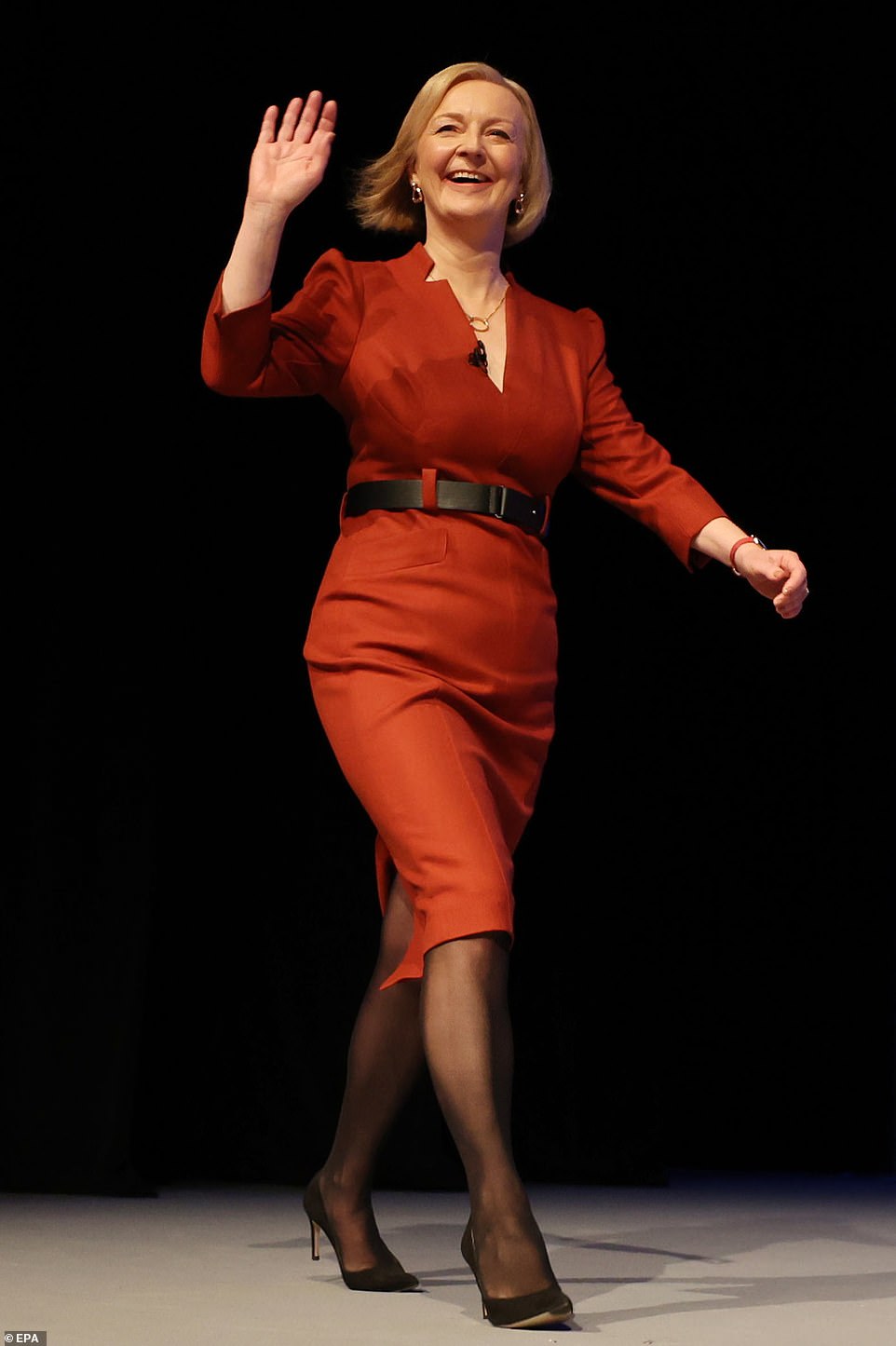 At the same time as Kate’s visit, prime minister Liz Truss made her keynote speech to the Conservative Party conference in Birmingham (pictured) 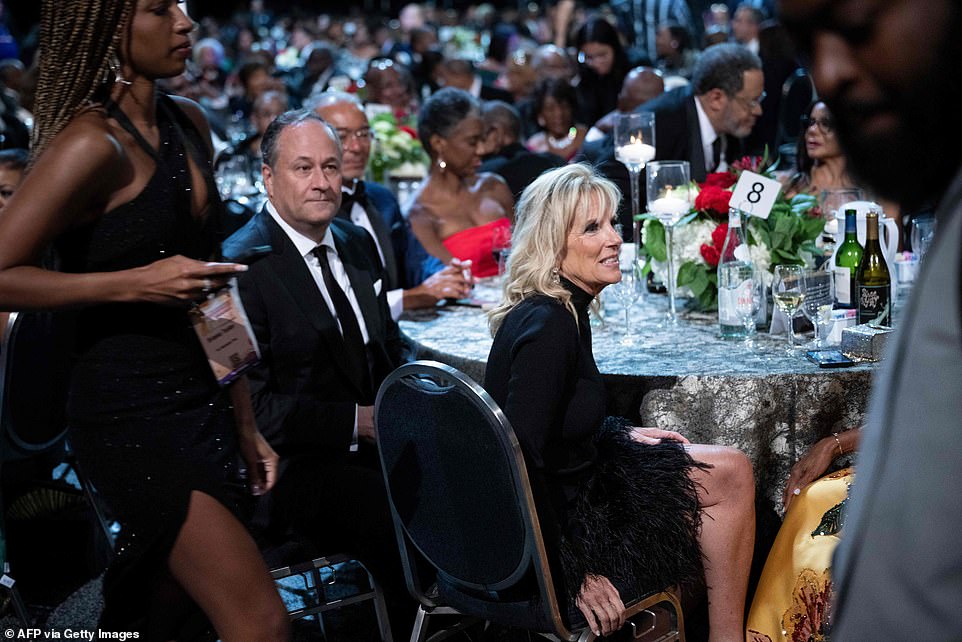 US first lady Jill Biden wore Karen Millen as she listened to speakers during the Phoenix Awards Dinner at the Washington Convention Center in Washington, DC

But she is not the only big name to have represented the brand in recent months, with TV presenters and other royals also wearing Karen Millen outfits to attend high-profile events.

As Carrie Johnson, Tess Daly and even UK prime minister Liz Truss have stepped out in the brand’s clothes, it appears the company’s buy-out by online retailer Boohoo in 2019 has paid off.

And according to fashion expert Miranda Holder, the Princess of Wales herself may have something to do with the soaring popularity of the brand.

Miranda told FEMAIL: ‘Once known as the sassier, higher-end high street brand for upwardly mobile women who loved to stand out from the crowd, Karen Millen had somewhat faded a little into the ether over recent years, their offering failing to stand out amongst its peers and quite frankly feeling a little uninspiring. 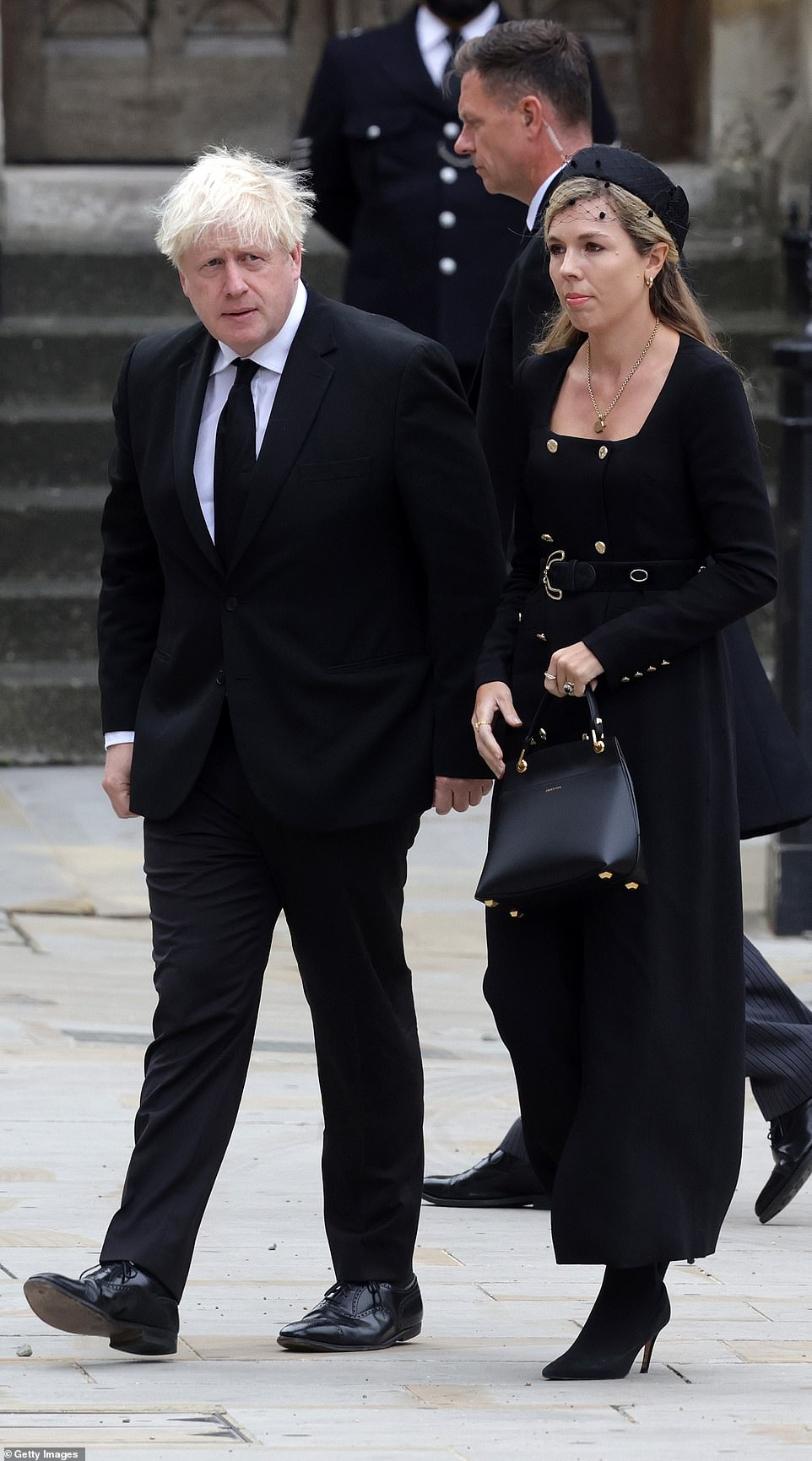 ‘Karen Millen has always done “corporate with a bit of edge” very well, cutting their tailored wardrobe staples to ensure they make an impression when worn, they embody modern power dressing whilst retaining an element of femininity, so they feel timeless and contemporary at the same time – which is just the perfect style tone for these three women to strike.

‘Karen Millen produces elevated classics with plenty of signature and interesting details, they are the brand you turn to when you want a look that means business whilst turning heads.

‘The brand is most definitely back! The “Princess Kate effect” alone is enough to catapult the high street player back into the style spotlight, and with endorsements from other high-powered women, Karen Millen is definitely looking to be the “High St comeback queen” on everyone’s fashion radar this autumn/winter.’

Hollywood actress and style icon Liz Hurley also launched a line with the brand, which no doubt has helped up its profile among fashion lovers today.

While the Princess of Wales was representing the brand during her hospital visit, the prime minister Liz Truss also donned a belted shift dress from the high street retailer to address her Conservative Party Conference in Birmingham. 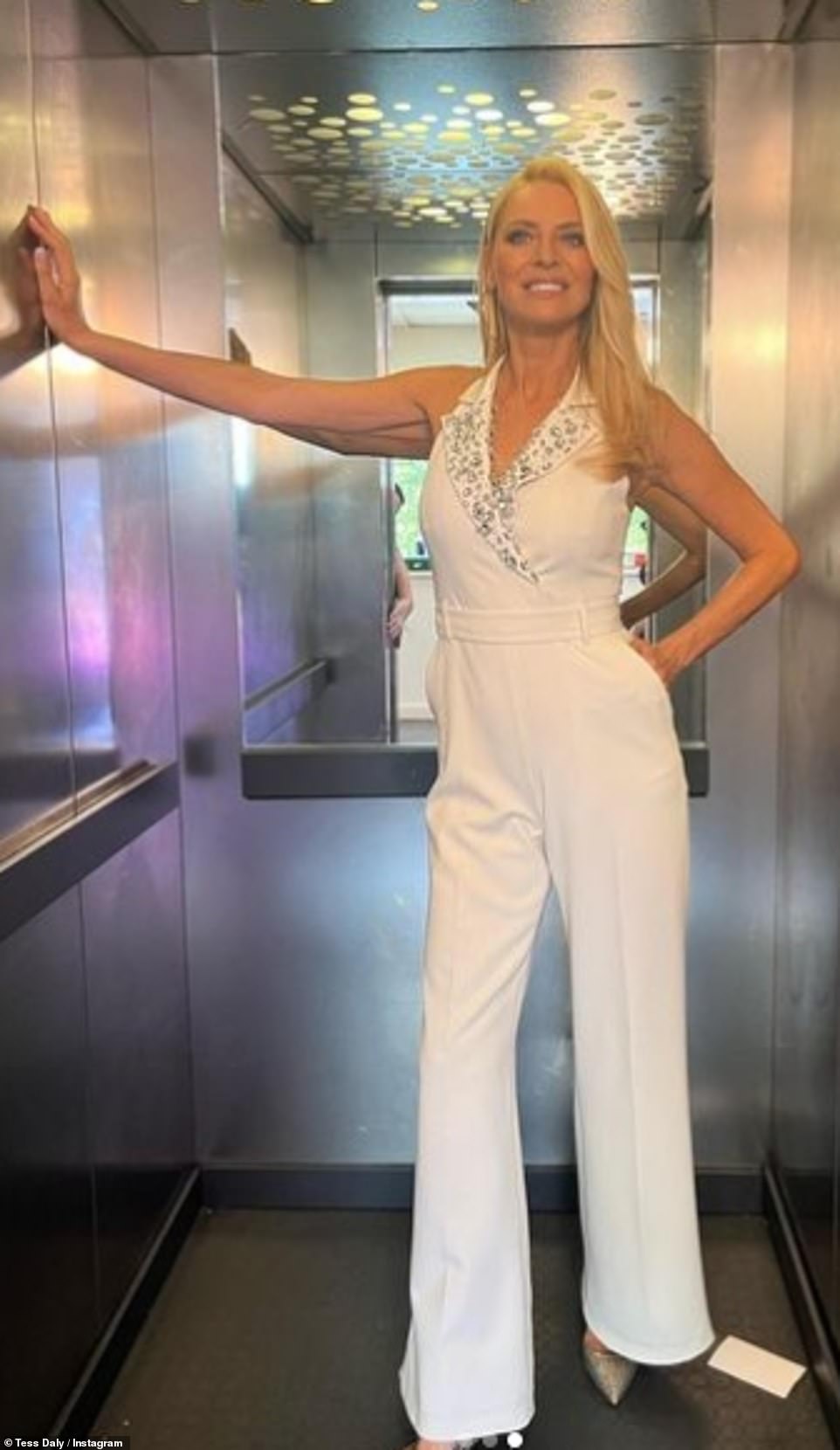 Carrie Johnson, the wife of former prime minister Boris Johnson, was pictured wearing a dress from the high street brand at the state funeral of Her Majesty Queen Elizabeth II at Westminster Abbey.

Pictured alongside her husband as they walked into the Abbey, Carrie, 34, wore the black, button-down dress with a belt around the waist.

She paired it with a black beret with a netted veil, tights and black heels, as well as a black handbag.

The environmental activist is believed to have rented the dress from My Wardrobe HQ, which cost an estimated £7 per day, according to the Evening Standard. 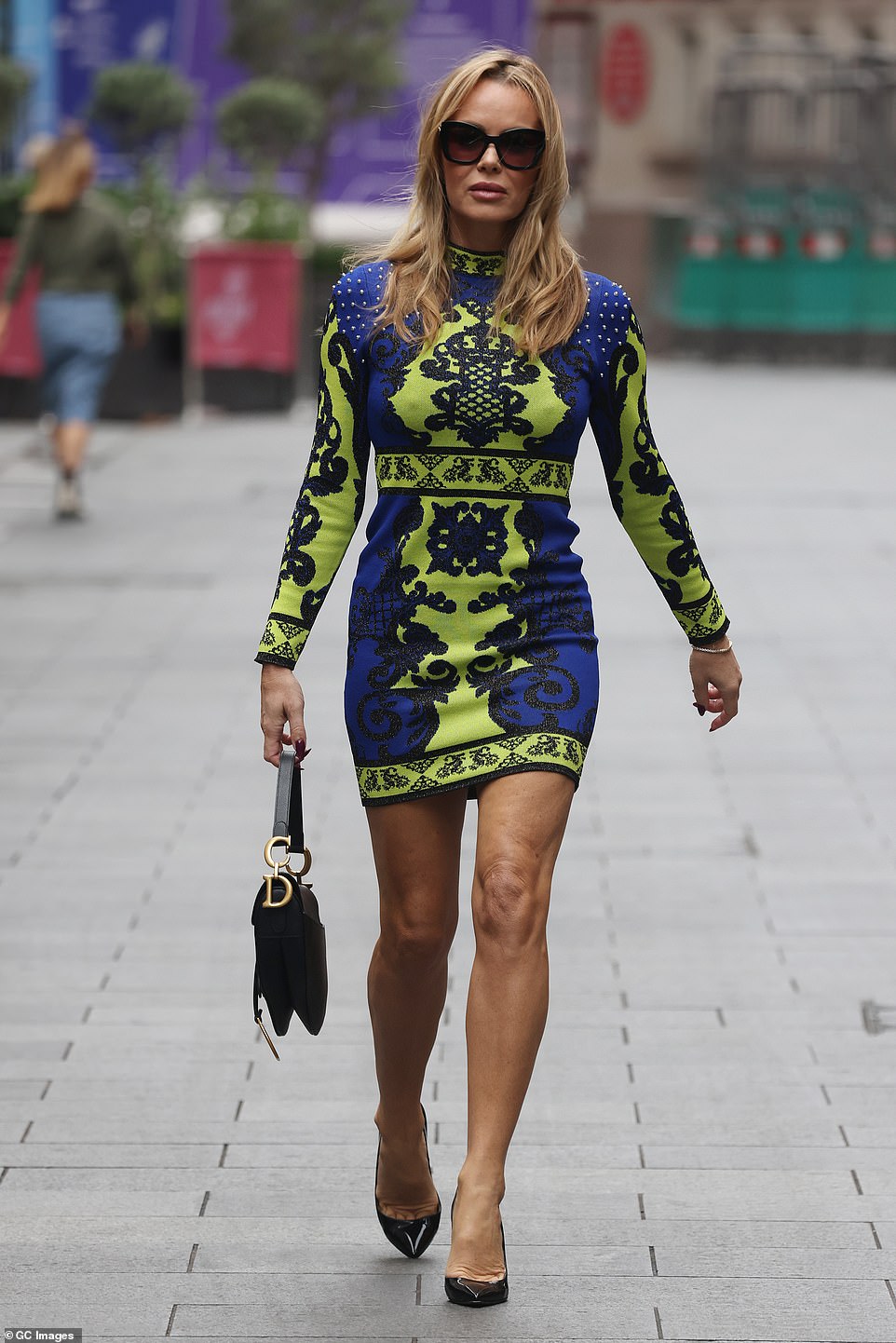 Stunning: Amanda Holden, who is known to be a fan  of the brand, showed off her incredible figure in an eye catching mini dress from Karen Millen earlier today

Meanwhile Amanda’s colleague Ashley Roberts is also known to have worn the brand on multiple occasions (left and right, wearing the label earlier this summer)

And, while the brand provided respectful mourning attire for the occasion, it has also been the label of choice for royals looking to celebrate, as displayed by Zara Tindall at this year’s Cheltenham Festival in March.

The keen equestrian and daughter of Princess Anne, 41, wowed royal fans in a structured burgundy cape-style coat, which she wore over black skinny trousers and paired with a matching hat and fascinator.

Mother-of-three Zara was pictured in the brightly coloured coat alongside her husband, former rugby player Mike, as they watched the races together.

Similarly, BBC star and presenter of Strictly Come Dancing Tess Daly has also recently been pictured wearing Karen Millen, championing their more dazzling outfits as she channels the glamour of the ballroom.

While shooting with co-host Claudia Winkleman ahead of the new series of Strictly earlier this year, Tess posed in a white jumpsuit with a waistcoat top. The lapels were emblazoned with gems for extra sparkle.