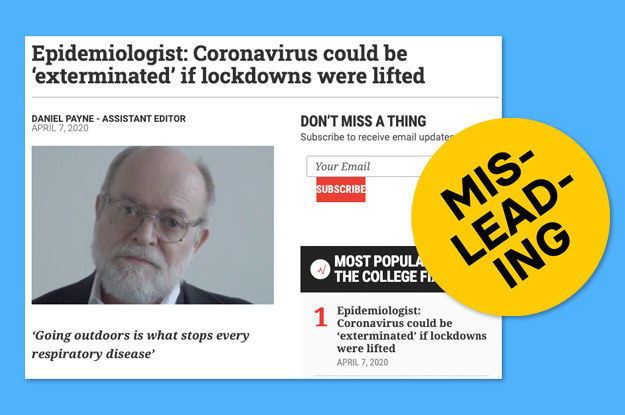 A website with Education Secretary Betsy DeVos’s son on its board of directors published a viral article that claims the coronavirus would be “exterminated” if lockdowns were lifted.

On April 7, the College Fix, a news and opinion website that normally publishes stories about politics and college life, ran a story titled “Epidemiologist: Coronavirus Could Be ‘Exterminated’ If Lockdowns Were Lifted.” The most popular story ever published by the College Fix, it received over 1.7 million Facebook likes, shares, and comments, according to social media tracking tool BuzzSumo.

The article cited an academic arguing for “herd immunity,” the idea that ending the lockdowns will result in people becoming immune to the virus after contracting it, which is heavily contested by epidemiologists.

The College Fix is a conservative publication featuring both student and nonstudent writers based in Hillsdale, Michigan, and overseen by the nonprofit Student Free Press Association. Rick DeVos, the son of Betsy DeVos, sits on the Fix’s board.

The DeVos family has a long history of funding conservative causes with its vast fortune. According to Fortune magazine, Betsy DeVos’s family, including her husband and children, is worth about $2 billion.

Written by assistant editor Daniel Payne, the College Fix’s story featured quotes from a YouTube interview with Knut Wittkowski published by UK-based video company Journeyman Pictures. In the video, Wittkowski misstated basic facts about the pandemic, saying “there are no more new cases in China and in South Korea,” contradicting publicly available statistics.

The College Fix described Wittkowski as a “veteran scholar of epidemiology” and previously the head of the department of biostatistics, epidemiology, and research design at Rockefeller University in New York. Although Wittkowski did hold that position at Rockefeller, the university has sought to distance itself from the scientist. On April 13, Rockefeller University released a public statement saying although he was previously employed by the university, Wittkowski had never held the title of professor and that his views on herd immunity did not represent the institution.

“Dr. Wittkowski was head of biostatistics, epidemiology, and research design in the Center for Clinical and Translational Science at Rockefeller University,” a university spokesperson told BuzzFeed News. “That group was not an academic department, however. Unusual among its peers, the university does not have academic departments, in fact. Dr. Wittkowski was employed at Rockefeller from 1998 to 2018.”

Many other publications are using articles from the College Fix to argue against extending lockdowns despite the main source’s contested science. The story first made the rounds in Facebook groups aimed at conservative audiences before breaking out of the closed online spaces and into more mainstream ones. Its biggest Facebook boost came from Mark Levin, a conservative radio host whose show gets syndicated by Fox News.

“I am not ‘discouraging social distancing’ (breaking the law),” Wittkowski told BuzzFeed News in an email. “I’m asking people to discuss the policy decisions made with their representatives. These are two very different things.”

In both the article and the video, Wittkowski said that schools should be reopened while the elderly and at-risk people should be isolated. However, coronavirus victims have included young people and children.

Daniel Payne, the author of the article, said the College Fix didn’t identify Wittkowski as a professor and used the same credentials as what he stated in the video.

“Our editors regularly write columns on the site expressing different viewpoints on varying higher ed topics, but those opinions do not constitute a unified editorial standpoint,” he told BuzzFeed News.

Dr. Aaron Glatt, the chair of the department of medicine and hospital epidemiologist at Mount Sinai South Nassau, told BuzzFeed News that Wittkowski was essentially advocating for more people to die from COVID-19.

“In multiple studies now, we’ve seen that when you restrict social proximity — what we call maximizing social distancing — you can impact the number of people who will get COVID and flatten the curve, decrease the number of new cases, decreasing significantly morbidity and mortality,” Glatt said.

“The danger is that many, many people will die if we just let nature take its course. That’s the problem. We don’t want people to die.”

The story featuring Wittkowski is one of several stories the College Fix has published that argue for the pandemic lockdown to end. Rick DeVos himself, however, has tweeted angrily about college students not following lockdown procedures.

Launched in 2010 by John J. Miller, a correspondent with the National Review, to nurture conservative and libertarian college students, the College Fix has had its writers frequently go on to work for other conservative publications. The website is funded through the Student Free Press Association, a nonprofit that receives the vast majority of its funding from contributions from sources that it does not disclose. In 2018, it received $749,509 in contributions, according to its tax documents. BuzzFeed News has reached out to Miller for comment.

Although it’s not clear where much of the current funding comes from, Inside Higher Ed reported in 2017 that the Fix’s income came from Donors Capital Fund, a large nonprofit that funds right-wing causes.

Donors Capital Fund also has received funds from another organization, Donors Trust, to which the DeVos family has contributed. In the past, the nonprofit Donors Trust has given money to organizations rejecting scientific facts about climate change. Both organizations have also donated over $1.7 million to Project Veritas, a right-wing activist group, according to the Washington Post.

It’s not possible to say whether any of the funds contributed by the DeVos family flowed directly from Donors Trust through Donors Capital Fund to Student Free Press Association and the College Fix. Aside from giving money to Donors Capital Fund, Donors Trust has also given $100,000 to the Student Free Press Association in 2017 according to tax forms. Miller previously said the DeVos family hasn’t given money to the College Fix, which would not rule out indirect funding.