“I want young girls everywhere to feel empowered to dream big and to know that if they believe in themselves that anything is possible!”

Naomi Osaka has proven to be a role model both on and off the tennis court — and now she’s got the Barbie doll to prove it.

The 23-year-old Japanese tennis champion, who has won four Grand Slam singles titles, is the latest star to be transformed into a Barbie doll. Naomi is set to join the iconic brand’s Role Models collection, which highlights empowering individuals who are making a difference in the world.

“We are incredibly honored to spotlight Naomi Osaka as part of our Barbie Role Model series. She has paved the way for future generations of girls to dream bigger, and through her unwavering courage and honesty, shown the world the importance of being your own biggest champion. Naomi continues to break boundaries on and off the court and is a powerful role model to fans everywhere,” the brand said in a statement.

Naomi’s doll will be outfitted in the attire she wore at the 2020 Australian Open, featuring a flared skirt, blue-and-pink Nike tank top, and a white visor. The fully poseable doll even has her own replica of Naomi’s Yonex tennis racket.

“It’s such an honor to be a part of the Barbie Role Model series, and to remind young girls that they can make a difference in the world. I want young girls everywhere to feel empowered to dream big and to know that if they believe in themselves that anything is possible!” Naomi shared. 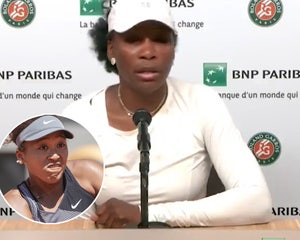 While sharing the doll on social media, Naomi called the Barbie a dream “come to life” and expressed that she can’t wait to see “little kids playing with it.”

This isn’t the first time that Naomi has been honored with her own Barbie doll. Back in 2019, Naomi was presented with a one-of-a-kind Shero doll in celebration of Barbie’s 60th anniversary. Fans expressed such disappointment that they couldn’t purchase the limited edition doll that the brand knew they had to include her in another collection.