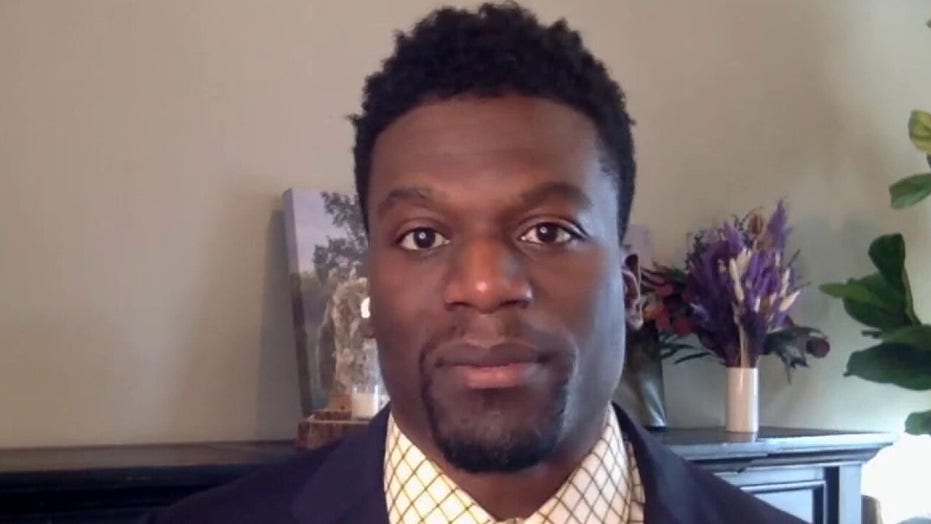 Former NFL player Ben Watson argues ‘the larger issue’ is whether we are ‘willing to have a conversation about how different people view the flag differently.’

All schools mentioned have NCAA Division I men’s and women’s basketball programs.

“The National Anthem is a symbol of pride for America,” the letter read. “It lifts our spirits toward the ideals upon which our great country was founded: that all are created equal and endowed by their Creator with certain unalienable rights, including life, liberty and the pursuit of happiness.”

The senators added: “During athletic competitions, our student athletes represent not only themselves, but also our universities and all the citizens of this state, many of whom view this form of protest as offensive and disrespectful to the very thing our National Anthem represents. While we recognize our student athletes may express their own views on a variety of issues in their personal time, we do not condone any form of protest that could be viewed as disrespectful to our nation or flag while they are representing our state universities. When they don the jersey of a Tennessee university, they step out of their personal roles and into the role of an ambassador for our state. We expect all those who walk onto the field of play representing our universities to also walk onto the field of play to show respect for our National Anthem.”

The lawmakers urged school officials to implement rules against kneeling during the anthem.

ETSU told Fox News in a statement it would review its athletic policies.

“ETSU is in receipt of the letter from members of the Tennessee General Assembly. We recognize the importance of this issue and will undertake a review of our existing athletic policies,” ETSU said.

Tiffany Carpenter, a spokesperson for the entire University of Tennessee system, also responded.

“We respect the brave men and women who serve and have served in our armed forces, the commitment of legislators Tennesseeans have voted to office, and our student athletes who represent our institutions. We received the letter from the State Senate late yesterday and are engaged in conversations across the System about how to move forward in a way that shows that commitment and respect for all,” she said.

ETSU coach Jason Shay said last week that the decision for his Buccaneers players to kneel was to spark a conversation about social justice issues.

“Our intentions by no means involve disrespecting our country’s flag or the servicemen and women that put their lives on the line for our nation,” Shay said, via the Johnson City Press. “You know we hold those heroes near and dear to our hearts, including two generals that have served our country right here in our backyard.

“No one knows the sacrifice, the fear, the pain, the anxiety, the loss that they’ve experienced fighting for our country’s freedom and rights. But many of us don’t know the same sacrifice, fear, pain and loss the people of color have had to endure over 400 years. My team is a daily reminder to me that some things are just bigger than basketball.”

Student-athletes across NCAA basketball started to kneel during the anthem after a summer of racial tension across the U.S. Pro athletes, including Colin Kaepernick, who launched the protest in 2016, have often said that the demonstrations aren’t about the flag or the anthem but rather to raise awareness on social justice issues.

The NCAA has supported players in the past when it came to kneeling during the anthem.

Recently, Bluefield College – an NAIA program – forfeited a game and suspended all of its players for kneeling during the anthem.