On a foreign court, in an irregular time slot, Melbourne Vixens still found a way to beat Sunshine Coast Lightning 63-51 and remain undefeated after three games of the Super Netball season.

The Vixens were listed as the home side at Sunshine Coast Stadium on Wednesday night with the COVID-19 pandemic continuing to keep them in Queensland. 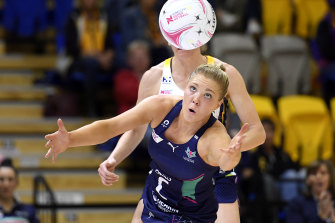 Eye on the ball: Kate Moloney impressed in her 100th game.Credit:Getty Images

But the Vixens made the conditions their own by controlling the play and keeping their focus on tempo, defensive pressure and passing to build an early lead and hold it throughout against a Lightning side who were undefeated in the opening two rounds.

Vixens captain Kate Moloney played her 100th game and was a pillar of strength for her side while in the shooting circle Melbourne were outstanding as Tegan Philip (19 of 25 goals) and Caitlin Thwaites (17 of 24) shone in the first half before Mwai Kumwenda (21 of 23) came on after half-time and continued to make big shots for her side.

"We knew Lightning would come hard at us, they are a quality side and I was so happy the girls could keep coming and win this one," Moloney told broadcasters post-game.

The Vixens sit on top of the ladder, just ahead of undefeated Swifts after the NSW side beat Adelaide Thunderbirds 66-51 earlier on Wednesday night.

The Lightning's passing and decision-making was lacking at times but the Vixens were looking for every chance to intercept or force the error and they repeatedly saw their efforts pay off.

On another night the margin would have passed 20 goals due to how well the Vixens were converting but the Lightning had long-bomber Steph Wood to thank for cutting the lead during power five periods in the third and fourth quarters as her two-point long shots kept the deficit respectable.

But it was in power five time of the second term where the Vixens really made their move as Philip nailed two super goals and Thwaites one of her own to win the quarter 18-8 and lead 34-19 at half-time.

The Lightning are known for their comebacks but they couldn't find a consistent flow in attack as Moloney was having an impact along with Emily Mannix and Jo Weston.

Lightning goal attack Steph Wood lifted in power five during the third term with a couple of two-pointers cutting the lead to 10 points but a timeout from the Vixens and a Moloney intercept settled the visitors who led to 49-38 at the final break.

The lead again fell to 10 in the final term but Kumwenda and Thwaites kept the goals ticking over to lock in the win.

The Vixens and Collingwood Magpies will remain in Queensland for at least another three weeks after Super Netball announced its fixtures for rounds four to six.

The Vixens will face Adelaide Thunderbirds on August 16, West Coast Fever on August 18 and Giants Netball on August 23 with the Fever game in Brisbane and the other two games on the Sunshine Coast.

The Magpies will play the Fever on August 15, the Thunderbirds on August 19 and NSW Swifts on August 22 with the Adelaide game on the Sunshine Coast and the other two in Brisbane.