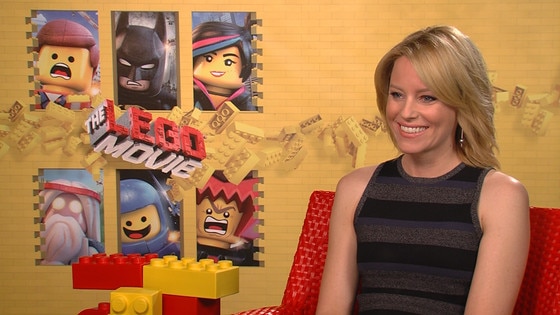 Is Elizabeth Banks smarter than a third grader?

On Monday, the Hunger Games star, who is mom to sons Felix, 9, and Magnus, 7, put her homeschooling knowledge to the test during her virtual visit to Jimmy Kimmel Live, where host Jimmy Kimmel quizzed her with first and third grade questions written by real teachers.

Kicking things off which an easy question, the late night host asked Elizabeth to tell him how many syllables were in the word “rhinoceros.” After sounding out the word on her hand, she answered correctly. Moving along to math, he then gave the actress a list of four numbers and asked her which one wasn’t a multiple of seven.

Relieved to have guessed the right answer, she found herself stumped on the final question: Which 3-dimensional shape has six square faces? “I don’t even know what the words you just said in that order mean,” she said after Jimmy read the question. Brainstorming the answer out loud and doing her best to visualize the object, Elizabeth got it right.

“Congratulations, you passed the third grade,” Jimmy cheered, to which the Pitch Perfect star replied, “Barely.”

Before diving into the hilarious pop quiz, Elizabeth opened up about homeschooling her children and gave the nation’s teachers a sweet shout-out, saying, “I do want to take the opportunity to say thank you to all of the teachers out there and all of the parents who are teaching because I have really come to the realization that, especially third grade math is nearly impossible to teach. You gotta have a lot of patience.”

Still on the topic of social distancing, Jimmy was also curious to know if the Mrs. America star had panic bought anything in preparation for the pandemic, which launched her into a hilarious story about her husband Max Handleman.

“My husband is the one who really panicked at the top of this whole thing,” she explained. “He has never really done the shopping for the family and we went online thinking he was doing us a grand favor and the only thing that got delivered to house was, like, an industrial sized box of Ramen noodles.” To make matters worse, the producer chose the chipotle chicken flavored variety, which Elizabeth joked is “truly the more disgusting version of Ramen you can get.”

Watch Elizabeth nail her homeschooling quiz and show off her family’s massive supply of Ramen noodles in the video above!