REVEALED: The International Paralympic Committee could use a loophole to allow 71 Russian athletes to compete at the 2022 Winter Paralympics because they have already arrived in China, despite calls from Ukraine and Britain for them to be banned

Russian and Belarussian athletes could still be allowed to compete at the 2022 Winter Paralympics, because the majority of their team is already in China for the event that starts on Friday.

The International Paralympic Committee meets in Beijing tomorrow to decide whether to allow Russia and Belarus to participate, as Russian aggression towards Ukraine in the bloody conflict intensifies.

One option is to allow those athletes to compete as neutrals.

The British Paralympic Association has insisted it does not see how allowing Russian or Belarusian athletes to participate in Beijing is ‘compatible with the objectives of the Paralympic movement’.

And the Ukrainian team, which is heading to Beijing, has warned the  IPC, ‘your legacy will be defined by your actions’.

Today, Kyiv has been braced for a dramatic escalation in bloodshed as a column of Russian tanks and artillery, snaked towards the Ukrainian capital – seemingly with the aim of surrounding and besieging it.

The 40-mile-long convoy is made up of hundreds of tanks, artillery pieces, attack vehicles and support trucks that is capable of bombing the capital into submission.

There will be huge pressure on the IPC to take action. Russia and Belarus have already been excluded from a wide range of international sporting competitions, in protest at the brutal invasion of Ukraine. 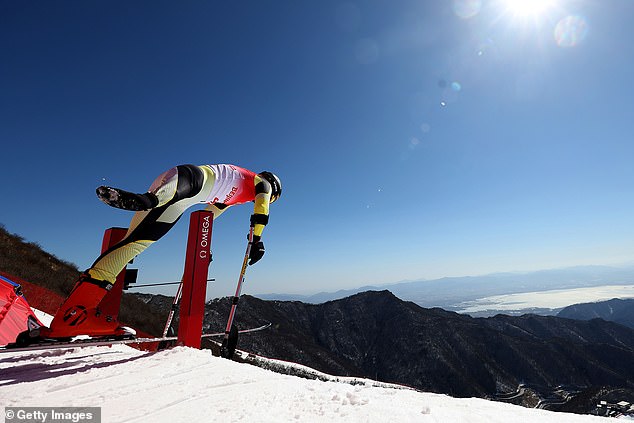 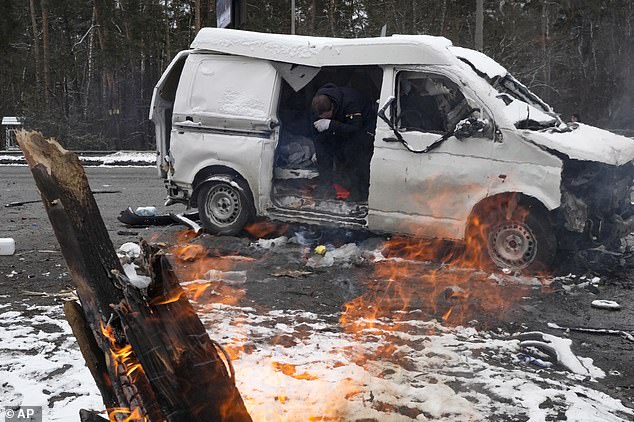 A man reacts inside a vehicle damaged by shelling, in Brovary, outside Kyiv

FIFA has removed Russia from qualification for the 2022 World Cup, UEFA has kicked Spartak Mosco out of the Champions League, and World Rugby has suspended Russia and Belarus from all international rugby and cross-border club rugby activities

Even so, the IPC may yet give the Russian and Belarussian competitors the green light to participate thanks to a loophole in the International Olympic guidance issued on Monday.

The IOC urged ‘International Sports Federations and sports event organisers [to] not invite or allow the participation of Russian and Belarusian athletes and officials in international competitions’.

However, the document goes on to say that where it is not possible to ban participation ‘on short notice for organisational or legal reasons’, then the IOC recommended Russian or Belarusian nationals ‘be accepted as neutral athletes’. 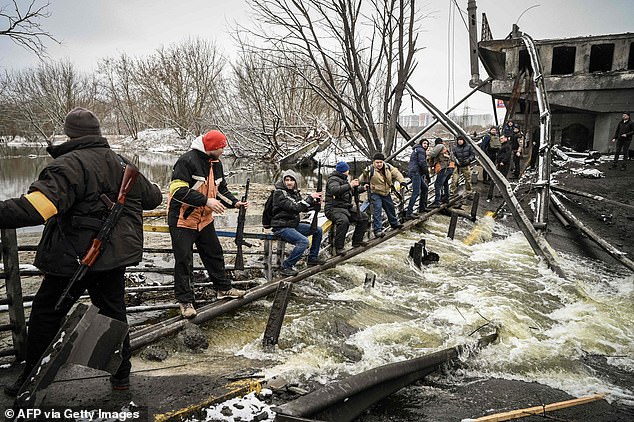 Members of an Ukrainian civil defense unit pass new assault rifles to the opposite side of a blown up bridge on Kyiv’s northern outskirts, where fighting with Russian forces has been taking place 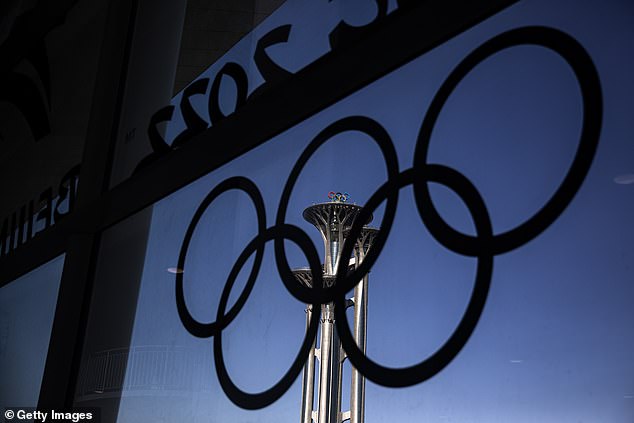 ‘No national symbols, colours, flags or anthems should be displayed,’ the IOC stated.

And it says ‘in very extreme circumstances’ if even this is not possible, it is up to the event organiser to determine the best course of action.

‘In this context, the IOC considered in particular the upcoming Paralympic Winter Games Beijing 2022,’ added the IOC guidance.

Russian athletes have been set to compete in Beijing under the Russian Paralympic Committee banner as part of earlier sanctions against the country for state-sponsored doping.

The team is made up of 71 Paralympians, many of whom are already in China, with the event just three days away. The proximity to the opening of the Games may yet lead the IPC to allow participation due to the short notice. 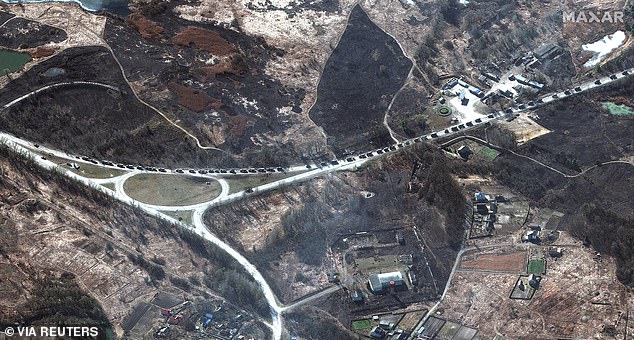 There are fears the purpose of the convoy (pictured) is to surround Kyiv, besiege it and bomb it into submission – mirroring tactics Russia used in Syria while fighting alongside the forces of Basahar al-Assad 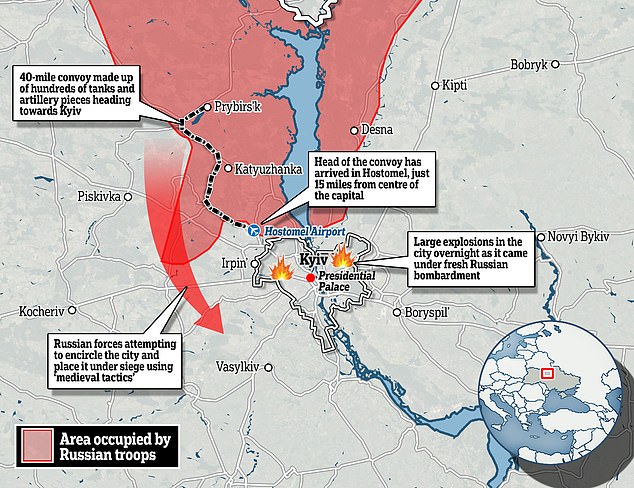 Kyiv endured another night of bombing on Monday before satellite images revealed the huge column of tanks headed for the city, with Putin’s men trying to cut off the capital and bomb it into submission

However, there is a precedent for sending home a national sports teams ahead of a major tournament due to unfolding international events.

In football, at the European Championships in Sweden in 1992, the Yugoslavia squad was told to pack its bags after a United Nations resolution was passed condemning the bombardment of Sarajevo.

UN Resolution 757 demanded that ‘All parties and others concerned in Bosnia and Herzegovina stop the fighting immediately.’

But it also stipulated that UN member states should ‘Take the necessary steps to prevent the participation in sporting events on their territory of persons or groups representing the Federal Republic of Yugoslavia (Serbia and Montenegro)’.

Meanwhile, the full Ukrainian team, made up of 20 athletes and nine guides, is expected to travel to China, the IPC tweeted on Tuesday.

The governing body tweeted a link to a Ukrainian media article about the team, which mentioned athletes would travel to China from different locations in Ukraine. The athletes will compete in two sports – biathlon and cross-country skiing – the article stated. 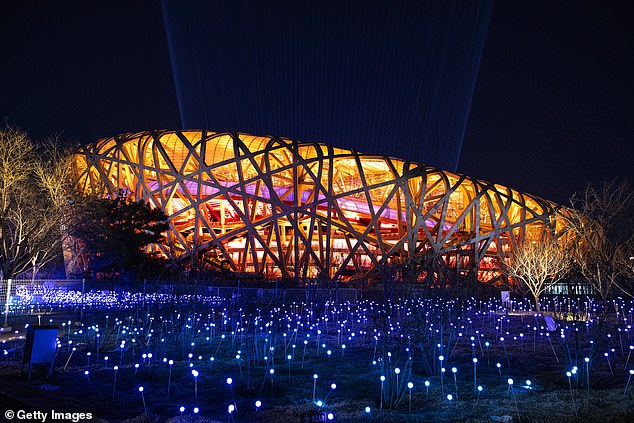 Houses destroyed as a result of shelling by the Russian army in Bucha, Kyiv

Ukraine’s athletes have asked for both the Russian and Belarussian teams to be expelled in an open letter to Andrew Parsons, the IPC president, and Thomas Bach, the IOC president.

The letter, which was published on the Global Athlete website, read: ‘If the IOC and IPC refuse to take swift action, you are clearly emboldening both Russia’s and Belarus’s violation of international law and your own Charters. Your legacy will be defined by your actions.

‘Make no mistake, athletes in the Ukraine are united in this call. It has been a challenge to speak with all athletes from Ukraine as they are seeking safety in bomb shelters.’

However, s further complication for the IPC may even be the participation of the Ukrainian team.

The IOC guidance justifies the exclusion of Russian and Belarusian athletes and officials in international competitions on the basis that the war will prevent Ukrainian athletes from attending events, while Russians and Belarusians will be able to participate. 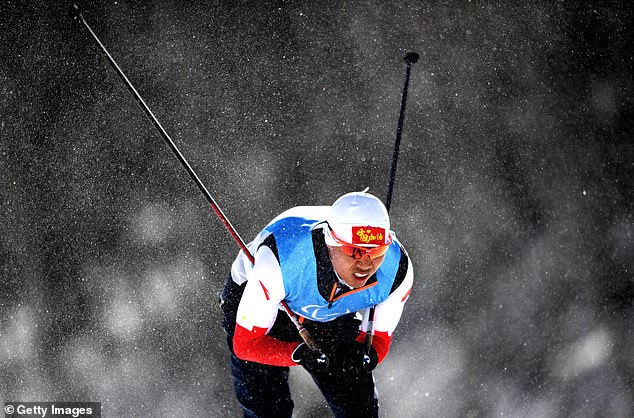 Ukraine is sending 20 athletes to the 2022 Winter Paralympics. (Pictured: Athlete from Team China skis during a Official Training Session at Zhangjiakou National Biathlon)

‘The current war in Ukraine… puts the Olympic Movement in a dilemma,’ said the IOC guidance.

‘While athletes from Russia and Belarus would be able to continue to participate in sports events, many athletes from Ukraine are prevented from doing so because of the attack on their country.

‘This is a dilemma which cannot be solved.’

The IOC said it was because of this dilemma that ‘with a heavy heart’ it had issued its guidance with respect to Russia and Belarus.

With respect to Beijing, as the IPC has highlighted, Ukrainian athletes are now expected to attend, which raises the question: If the ‘dilemma’ has been solved, will the IPC still have to apply the sanction?

The pressure to expel the Russian team and athletes from the Games is huge and it a debate that may well divide the 13 IPC board members.

But while the IPC deliberates the situation in Ukraine grows bleaker, as the war moves through its sixth day. 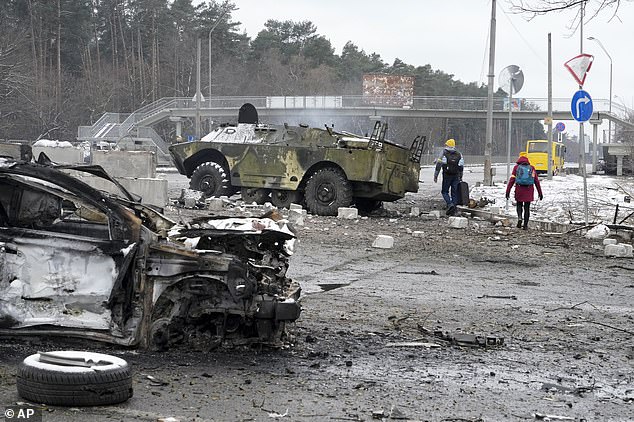 People walk by a damaged vehicle and an armored car at a checkpoint in Brovary, outside Kyiv

Observers have warned that Vladimir Putin’s invasion of Ukraine is about to enter a brutal new phase, abandoning precision strikes against key infrastructure and military bases that met with crushing defeats in the early days of the war and instead resorting to ‘medieval tactics’ to try and force a bloody victory.

The city of Mariupol, in Ukraine’s south, said early Tuesday that bombardment had already started – with the mayor saying it is under ‘constant shelling’ by Russian forces using artillery, Grad rockets, and fighter jets targeting civilians’ areas such as schools and homes which had left many dead, including women and children.

Power to the city, which is in danger of being surrounded by Russian forces, has been cut – region head Pavlo Kyrylenko said Tuesday – but it remains under Ukrainian control.

Kherson, another key city located in southern Ukraine with a bridge over the Dnieper River, also came under bombardment by Russian forces today as missiles landed near civilian buildings on the outskirts and troops were pictured moving through the streets.

Kharkiv, in the east, continued to be under bombardment today with a large rocket landing in front of the civilian public administration building, leaving the interior heavily damaged. It came just a day after Kharkiv was hit by cluster bombs that landed near a shopping centre, killing at least 11 people and leaving dozens more wounded.

Ukraine’s ambassador to the UN later said that a thermobaric ‘vacuum bomb’ was also used on the country, though did not saying exactly when or where.

President Volodymyr Zelensky this morning branded the Kharkiv bombing a ‘terrorist’ attack and branded Russia a ‘terrorist state’ while repeating calls for a war crimes investigation. The chief prosecutor of the International Criminal Court at The Hauge has said that a probe will be established ‘as soon as possible’.