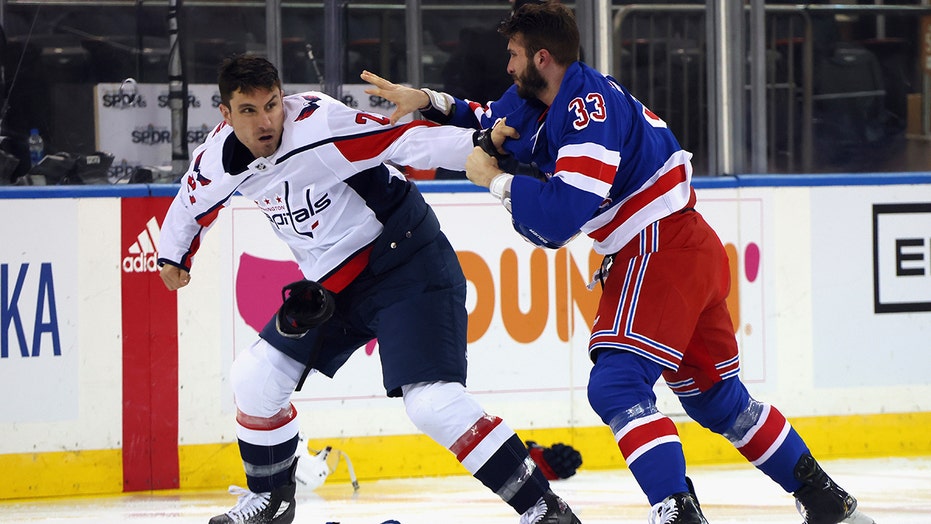 The New York Rangers responded to Washington Capitals’ enforcer Tom Wilson’s cheap shot attack and injury to Artemi Panarin on Monday by taking matters into their own hands Wednesday with a half-dozen brawls breaking out on the ice in the nation’s capital.

Rangers players fought six different Capitals players, including Wilson in retaliation to the winger punching Pavel Buchnevich in the back of the head before throwing star forward Panarin to the ground and punching him in the head as the second period of Monday’s matchup between the East Division rivals.

In the first period alone, 100 penalty minutes combined were assessed between the Rangers and the Capitals.

All six fights happened in the first five minutes of the game. Thirteen total penalties were accounted for over that time period.

The controversial Wilson, a repeat visitor to the penalty box this season with 69 minutes heading into this game, was fined $5,000 for his actions in Monday’s brawl but was not suspended.

Hours after the NHL decided to not suspend Wilson, the Rangers took their dissatisfaction one step further by making an official statement calling NHL’s head of player safety George Parros “unfit” for the job after such a glaring lapse in judgment.

“The New York Rangers are extremely disappointed that Capitals forward Tom Wilson was not suspended for his horrifying act of violence last night at Madison Square Garden,” the team statement began. “Wilson is a repeat offender with a long history of these types of acts and we find it shocking that the NHL and their department of player safety failed to take the appropriate action and suspend him indefinitely.”

The statement continued: “Wilson’s dangerous and reckless actions caused an injury to Artemi Panarin that will prevent him from playing again this season. We view this as a dereliction of duty by NHL Head of Player Safety, George Parros, and believe he is unfit to continue in his current role.”

Wilson was given a double-minor penalty for roughing and a 10-minute misconduct during the game. The fine represents 0.12% of Wilson’s $4.1 million salary for this season.

This is his third fine in eight NHL seasons, and he has been suspended five times. The most recent suspension was seven games in March for boarding Boston’s Brandon Carlo.