Supply trucks are once again delivering beer on Bourbon Street and the landmark Cafe Du Monde is serving beignets, fried pastries covered with white sugar, even though there aren’t many tourists or locals around to partake of either.

With almost all the power back on in New Orleans nearly two weeks after Hurricane Ida struck, the city is showing signs of making a comeback from the Category 4 storm, which is blamed for more than two dozen deaths in the state. More businesses are opening daily, gasoline is easier to find and many roads are lined with huge debris piles from cleanup work.

Thousands are still struggling without electricity and water outside the metro area, and officials say oppressive heat is contributing to both health problems and the overall misery. It could still be weeks before power is restored in some areas, and many residents who evacuated haven't returned.

"It is not lost on anybody here at the state level and certainly not on our local partners just how many people continue to suffer," Gov. John Bel Edwards said Thursday. "While things are getting better and we can be thankful for that, this is going to be a very long-term recovery."

Around New Orleans, residents are seeing signs that life is getting back to normal after Ida. Philip Palumbo, who lives in the French Quarter and works at a bar that remains shuttered, said the citywide curfew being lifted should help restaurants and bars struggling to reopen get more customers.

"There’s not a lot around yet, but they’ll be back," he said.

Power crews reached a "major milestone" in the New Orleans area by restoring electricity to the vast majority of customers, Phillip May, chief executive of the state's largest power provider, Entergy Louisiana, said in a conference call with reporters Thursday. About 201,000 of Entergy’s 205,000 customers, or 98%, now have power, the company said, and those that don't had more severe damage.

More than 220,000 homes and businesses remained without power Friday in southeast Louisiana, according to the state Public Service Commission. And while Baton Rouge and New Orleans were almost completely restored, the four hardest-hit parishes – St. John the Baptist, St. Charles, Terrebonne and Lafourche – still had 80% or more of their utility customers without power.

Now that power is mostly restored to New Orleans and Baton Rouge, more crews are heading south to the areas hardest hit by the storm, May said Friday.

"As we move into those harder-hit areas, the effort to restore customers becomes greater," said May, who vowed to "keep up the pace" of restoring electricity across the region.

Other parts of the state's health care network, which was slammed with COVID-19 cases even before Ida, are struggling. Executives of Ochsner Health System, Louisiana's largest care provider, estimate it will take about four weeks to get two of its damaged hospitals fully operational. 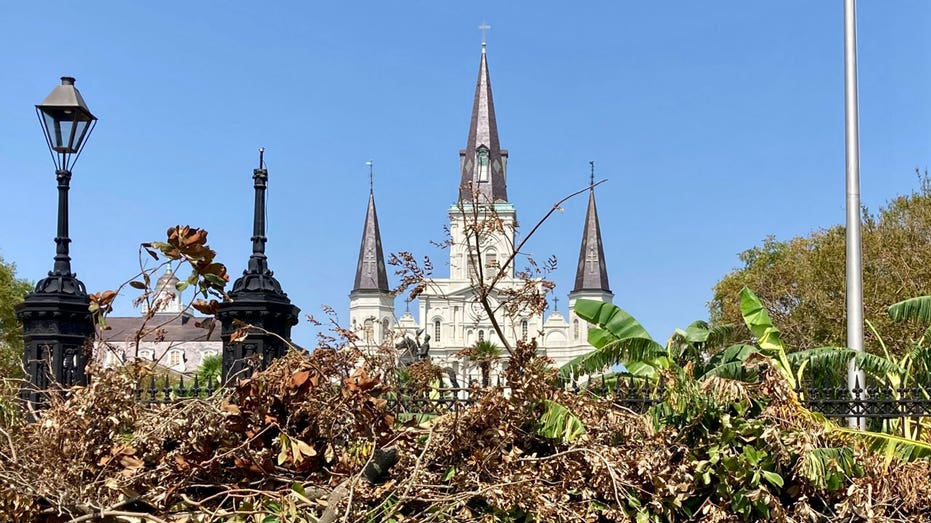 A pile of debris from Hurricane Ida blocks the view of Jackson Square in the heart of the French Quarter in New Orleans on Thursday, Sept. 2, 2021. With nearly all the power back on in New Orleans nearly two weeks after Ida stuck, the city is showing (AP Photo/Stacey Plaisance / AP Newsroom)

"Many of those have not had to be admitted, thank goodness. But it certainly is a good reason to keep reminding people that they’ve got to be careful with their generators," he said. "We had one family say they put the generator in their house because they were afraid it would get stolen."

In one bright spot, Ochsner said the number of people being treating for COVID-19 is down significantly. Ochsner had 486 COVID-19 patients Thursday, down from 1,074 a month ago, chief executive Warner Thomas said.

"We’ve continued to see a decline pretty much every day over the past couple of weeks," Thomas said.

Around New Orleans, progress is showing up both in lights that are back on and piles of debris that line multiple streets. As residents return home they are stacking up wet mattresses, fractured lumber, tree limbs and other storm refuse along curbs. In the French Quarter, a big pile sat beneath balconies with decorative ironwork.

In the New Orleans suburb of Gretna, Tiffany Scott and her family had a long pile of debris along the sidewalk outside her home. Scott said it has slowly gotten easier to get gas, ice and other supplies that were scarce immediately after the hurricane.

"We’ve been through this before, so most of us are used to knowing that we have to go drive and sit in a line," she said. "But it’s a lot easier to find the things you need."

Still, there is evidence the city has a ways to go before it is fully recovered.

Sid Padil, visiting from San Francisco to check on gas stations and convenience stores he owns in Louisiana and Mississippi, said he was surprised by the devastation and swaths of blue-tarped roofs visible upon landing in New Orleans on Monday. He had a hard time finding a place to eat, and when he did, it was mostly locals and what appeared to be recovery workers, said Padil.

"I don’t see many tourists right now," he said.