A pianist with dementia who improvised a tune from four notes which went viral and was turned into an orchestral hit has inspired a £1million donation to Alzheimer’s charities.

Composer Paul Harvey, 80, from Sussex, is currently number one in the iTunes and Amazon music charts after his composition was adapted by the BBC Philharmonic Orchestra, with all the proceeds going to the Alzhiemer’s Society and Music for Dementia.

Paul and his son Nick were moved to tears on BBC Breakfast this morning when Scottish tycoon Sir Tom Hunter announced his generous gesture.

Revealing he had lost both parents to Alzheimer’s, Sir Tom – who rose from humble beginnings selling trainers from the back of a van to become Scotland’s first billionaire – said he and his wife Marion have no desire to be ‘the richest people in the graveyard’ and wanted to help. 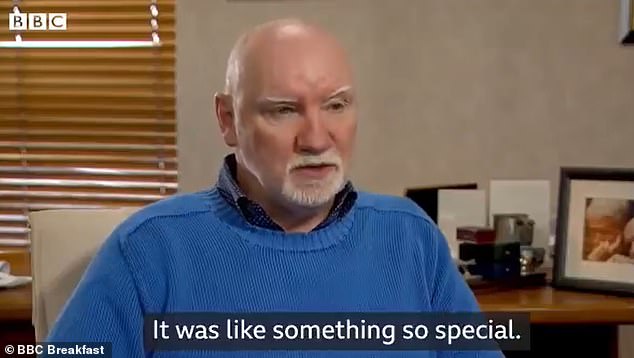 He told Paul and Nick via a video message: ‘We were so moved, my wife and I, when we saw your wonderful piece on BBC Breakfast, and in a time where people are searching for good news, you lit up the screen with, first of all, the relationship between the father and son, and then the relationship with music.

‘So my wife Marion and I would like to help you by donating a million pounds from the Hunter foundation to help put a light into trying to release people from Alzheimer’s.

Visibly overwhelmed by the kind-hearted gesture, Paul and Nick embraced before the musician replied: ‘Thank you so much, wow. I don’t know what to say, thank you. Amazing. I didn’t think I could be moved much more, but now I can.’

Giving his father an affectionate punch on the arm, Nick added: ‘What a team, eh Dad? You and me, take on the world.’

A comical moment then ensued when Nick suggested they ‘split the money’ – with Paul interrupting with ‘No!’ before his son had a chance to complete his sentence with ‘between the two charities’.

Presenter Dan Walker led the tributes to the pair on Twitter, writing: ‘I don’t know about you, but I can’t get enough of @mrnickharvey and the relationship with his dad. I love the way he looks at him when Paul speaks and, when the million pound donation was announced, it was all too much. Beautiful.’ 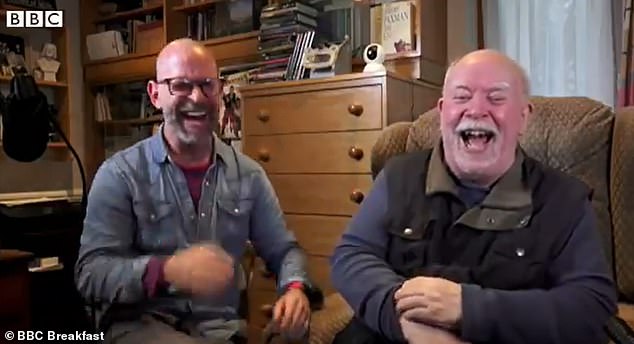 A comical moment ensued when Nick suggested they ‘split the money’ – with Paul interrupting with ‘No!’ before his son had a chance to complete his sentence with ‘between the two charities’

Viewers agreed, with one tweeting: ‘Wow, the most beautiful piece of music and the most fantastic gesture from Sir Tom Hunter. During these times of uncertainty this is the kind of TV that warms the heart.’

Another branded it ‘the best ever interview ever ever’ while one wrote: ‘What a wonderful story. Very moving.’

‘The piece on the gentleman with dementia was so moving and must admit to being in tears when they got the £1 million donation,’ another commented, while one called for Paul and fundraiser Captain Sir Tom Moore to record a Christmas single together. 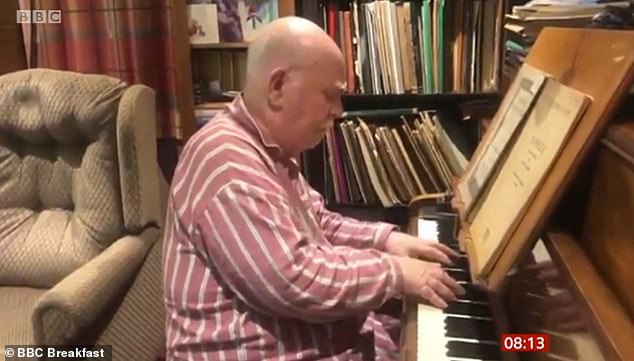 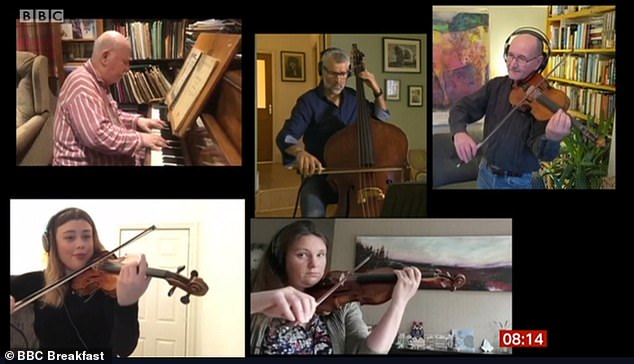 Paul’s Tune is currently number one in the iTunes and Amazon music charts after his composition was adapted by the BBC Philharmonic Orchestra, with all the proceeds going to the Alzhiemer’s Society and Music for Dementia

Last month he was challenged by his son Nick to come up with a melody using just four notes – an old party tricky of his.

Nick picked F natural, A, D and B natural for his father to play and, dressed in red and white striped pyjamas, Paul improvised a beautiful piece.

A clip of his performance – intended to show how musical ability can survive memory loss – went viral and was played on BBC Radio 4’s Broadcasting House to mark World Alzheimer’s Day on September 21.

Listeners were so moved by the piece that they asked the BBC to have it fully orchestrated – which is when David Whilbey, of the BBC Philharmonic Orchestra, stepped in. Dan adapted Paul’s tune for full orchestra, with individual parts recorded by musicians while they were locked down at home.

Paul and Nick hope his single will make it to Christmas number one.

Who is Sir Tom Hunter?

Sir Tom Hunter rose from humble beginnings selling trainers from the back of a van – thanks to a £5,000 loan from his father – to become Scotland’s first billionaire.

The tycoon, from New Cumnock in Ayrshire, opened his first Sports Division shop in Paisley in 1984 and went on to develop a chain of more than 250 stores around the country, employing 7,500 people.

He made his first serious money when he sold the chain to JJB sports in 1998, making a £250 million fortune.

That year he also began to develop his interest in philanthropy and, with his wife Marion, established The Hunter Foundation.

The organisation has since donated millions to supporting educational and entrepreneurial projects in Scotland.

As well as building his business, Sir Tom has invested his energies into encouraging others to develop their entrepreneurial spirit.

He is a director of the Prince’s Scottish Business Youth Trust and Schools Enterprise Scotland.

He was knighted in 2005 for services to entrepreneurship and philanthropy, and was awarded a doctorate by Strathclyde University in late 2001.

In 2001 he founded West Coast Capital, a private equity partnership with shares in companies such as USC, Office and BHS.

Sir Tom has also gone on to buy up companies including Wyevale Garden Centres and the retirement homes specialist McCarthy & Stone.