The mother of a teenage swimmer is furious that a picture of her son wearing girl’s bathers has been published and cited as evidence of a cultural problem in the sport.

Monika Zwolsman, the self-described “tiger mum” of Soren Zwolsman, now 15, and his older brother Yannick, a swimmer preparing to swim in Tuesday’s Olympic trials in Adelaide, said the photograph had been grossly misrepresented. 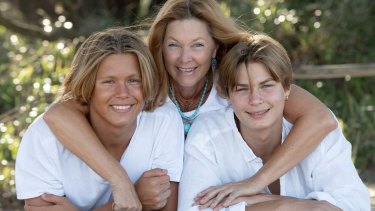 Monika Zwolsman with her sons Yannick, left, and Soren Zwolsman. Ms Zwolsman is angry a photo taken three years ago of her son Soren wearing girl’s bathers at a swim meet was misrepresented to allege bullying in the sport.

An unnamed parent took a picture of Soren wearing the bathers two years ago when he was aged 13, and this week provided it to The Australian newspaper, which published it alongside a story claiming the episode was a “humiliating ritual” inflicted by a leading coach to punish slow swimmers.

Ms Zwolsman said it was nothing of the sort and that Soren wore the bathers by choice. 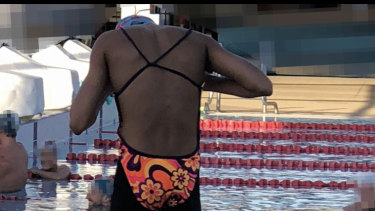 The picture of Soren Zwolsman that his mother said was misrepresented.

“Everyone knows Soren,” she told The Age and The Sydney Morning Herald. “My children are raised by a single mum. They are not worried about gender stereotypes.

“Soren has gone to school wearing girls’ dresses. When he was little he walked around in dresses all the time. He doesn’t care. If there is something he likes he will wear it.

“They are probably his own bathers. Why would that be a problem?”

The unnamed parent who took the picture without Ms Zwolsman or Soren’s knowledge wrongly claimed that the boy was forced to wear the bathers by his coach because he was ‘training like a girl’. The parent said other swimmers in the pool did not seem shocked by the episode.

“It was a ­humiliating experience for him while other swimmers, some of whom are Olympians, looked on and ­giggled,” the parent said.

Swimming Australia on Monday night issued a statement saying the boy’s decision to wear the bathers did not involve shaming or punishment.

“Swimming Australia has spoken to the mother of the child concerned and she is deeply upset her child has been shamed for wearing his choice of swimsuit,” the statement read.

Ms Zwolsman said she was sitting in the stands at Southport pool on the Gold Coast on the day Soren wore the bathers. She said head coach Glenn Baker took the squad and it was false to suggest Soren had ever been mistreated by his coach.

“Glenn would never treat any swimmer badly. They don’t. We are tiger mums. As if we are going to sit there while someone tells our children something that we know is going to upset them?

“We would just fly in there and attack.”

Yannick Zwolsman will attack the 200 metre breaststroke in Tuesday’s heats.

Most Viewed in Sport