Refund, please! From AirPods that turned out to be shower heads to a summer dress that only fit the dog, people reveal their most hilarious online shopping fails

When you’re ordering online, there’s always a risk that your item won’t quite live up to expectations, but some purchases turn out to be so different in the flesh that you don’t know whether to laugh or cry.

People from all over the world have shared examples of hilarious online shopping fails that left them in stitches in a gallery on Bored Panda.

One man from Australia who had bought veneers online advised others to not make the same move after receiving a set of comedy pearly whites that barely fit under his top lip.

A woman who was yearning for a cute white cotton dress ended up giving the garment to her dog, because it was five times too small for her.

And another who thought she’d picked up a pair of bargain AirPods was dismayed when the wireless headphones turned out to be two white plastic shower heads. 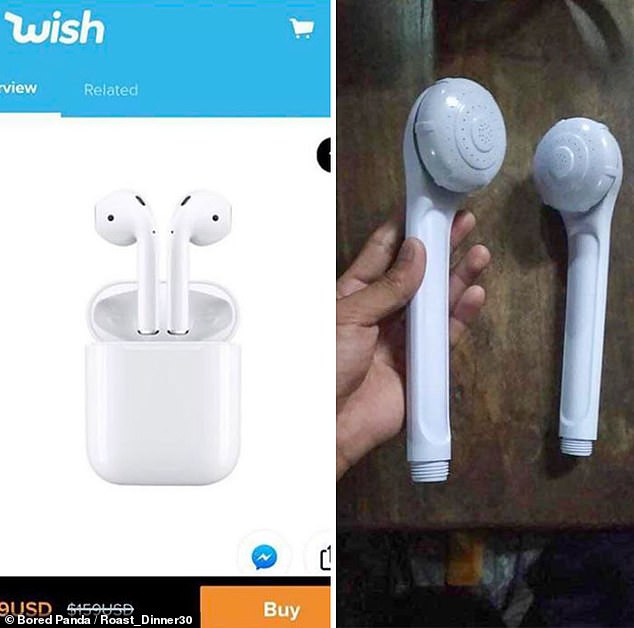 Don’t try to put that in your ear! Posting on Reddit, a woman revealed her disappointment at discovering the bargain AirPods she thought he was buying were in fact plastic shower heads 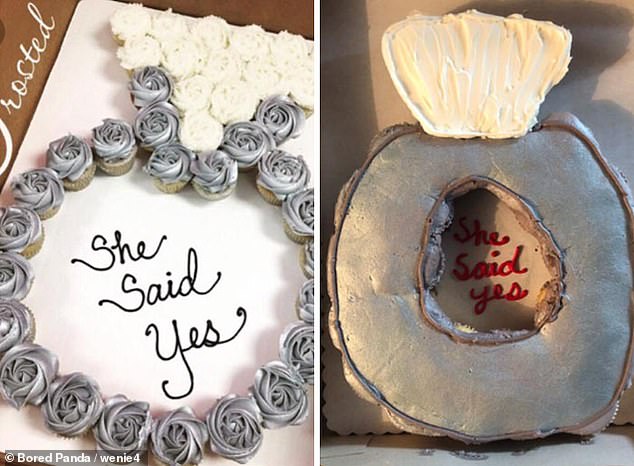 Not such as sweet treat: A US bride-to-be who wanted to celebrated her engagement got a bad surprise when her sister ordered her a cake online

Grin and bear it! An Australian man who had ordered veneers online advised others against it, after he was left with a comedy smile 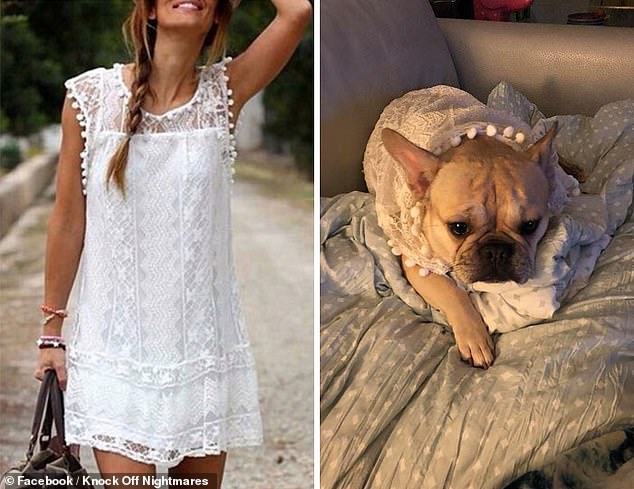 Canine chic! A US-based Facebook page Knock Off Nightmares revealed how one customer was disappointed when the summery dress she ordered would only fit her dog 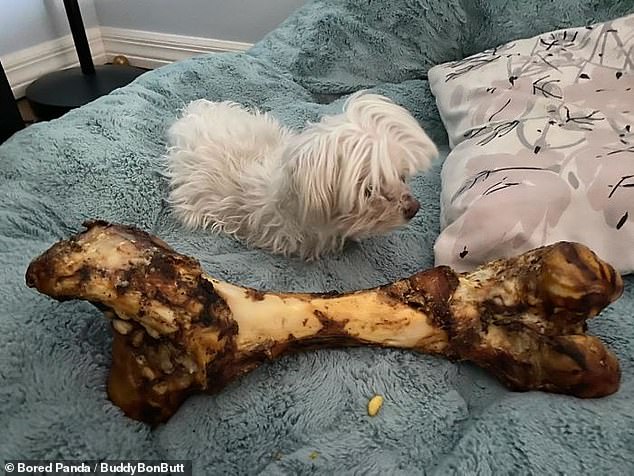 Give a dog a bone! Pets love to get treats but it will take a while for this canine to get through a chew many times bigger than his body 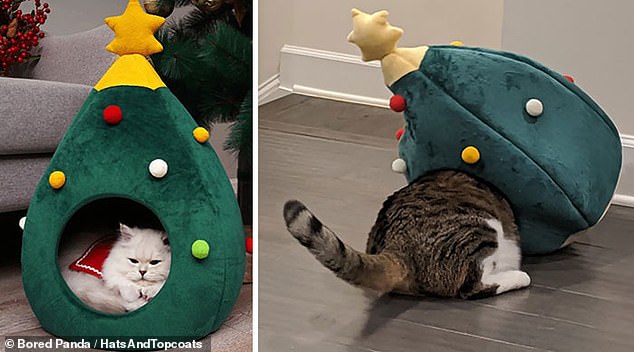 Feline squashed! A US-based cat owner had a laugh when her furry friend could barely stick his head through the bed they had ordered online 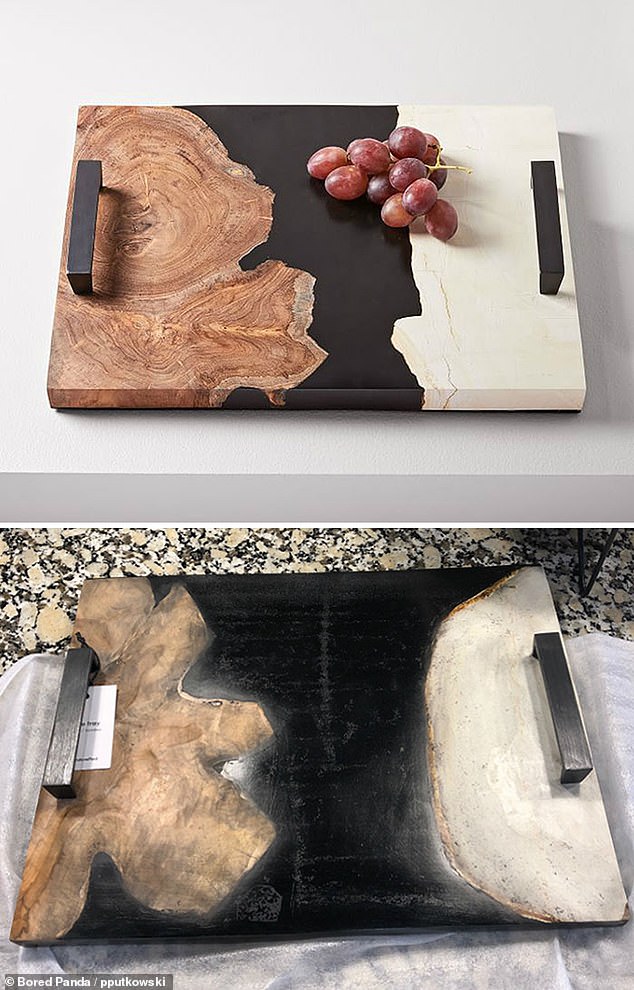 A couple from New York splashed out on this chopping board from West Elm, which looked like nothing they were expecting 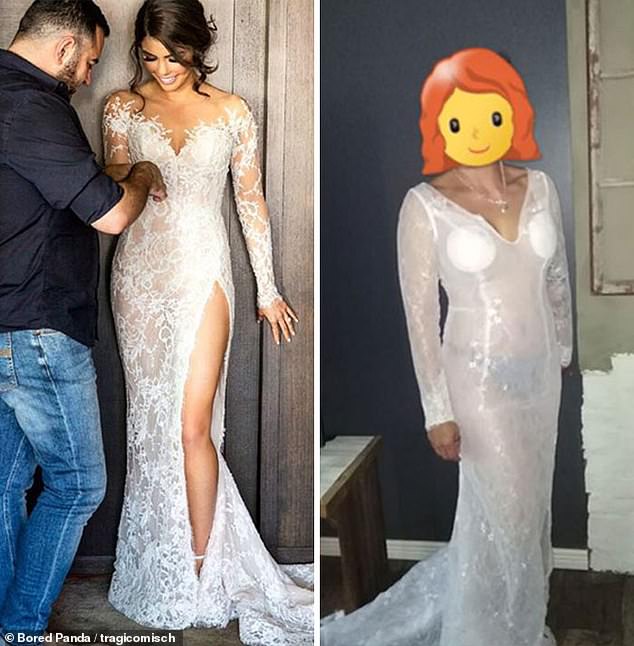 You can’t go down the aisle like that! A bride-to-be from Austria fell victim to another Ali Express fail when she ordered her white dress for her big day 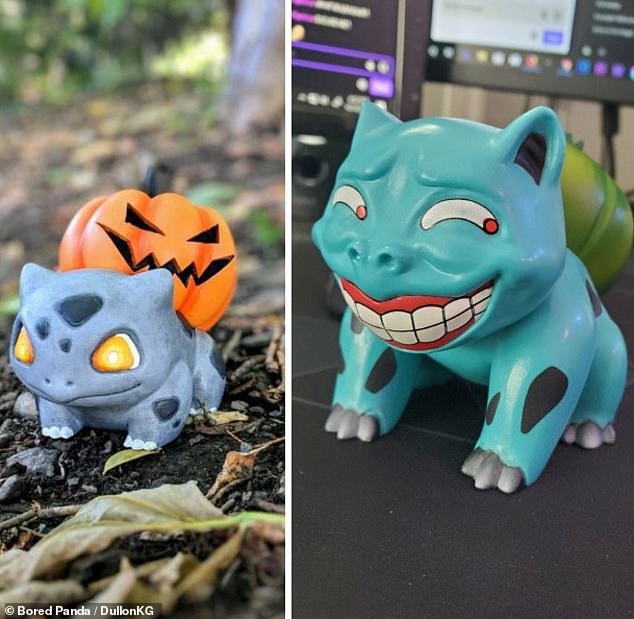 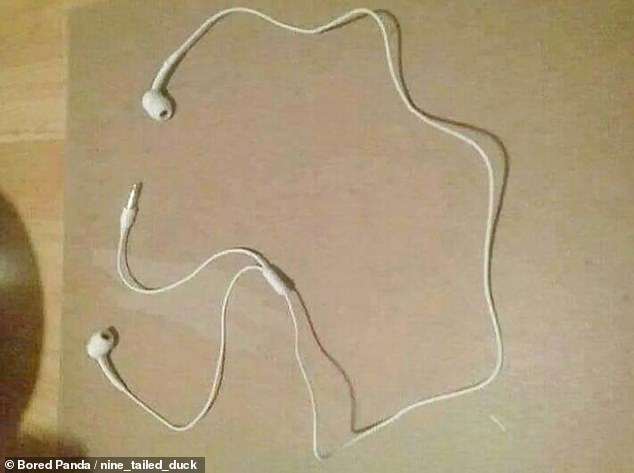 You don’t want to stick that in your ear! A man from Bolton, Greater Manchester was amused to receive these headphones with one of the earbuds in entirely the wrong place 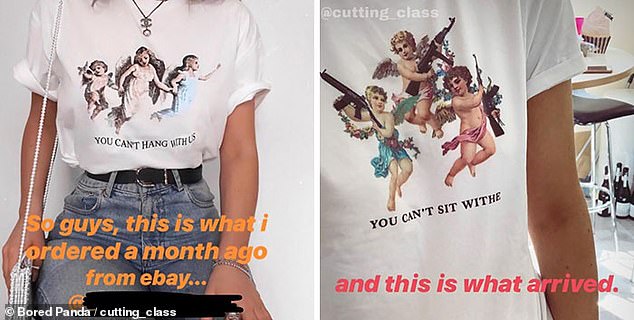 Don’t take your guns to town: A UK woman who wanted a t-shirt with cherubs said the end product was not quite what she expected 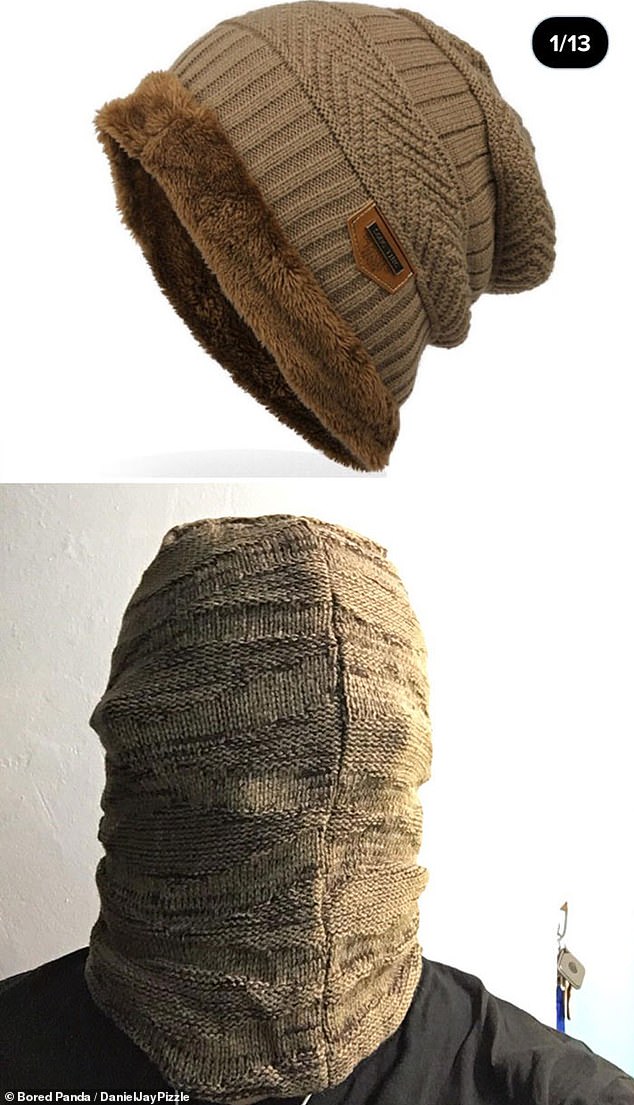 At least it will keep you warm! A man in Toronto thought he would receive a cozy winter hat but instead got this misshapen balaclava 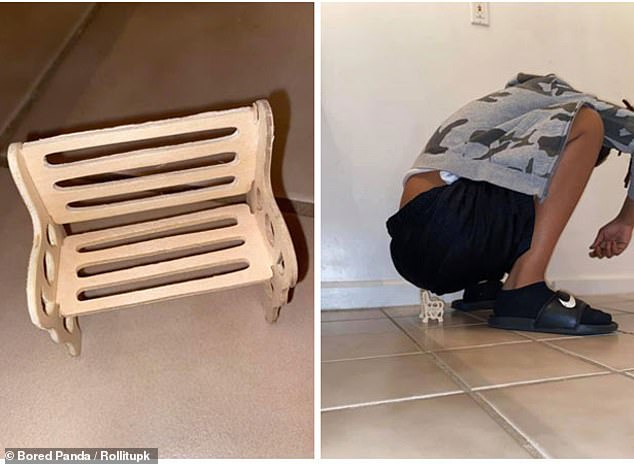 A shopper from Huntsville, Alabama was flabbergasted to see the chair they ordered online was made for a doll house 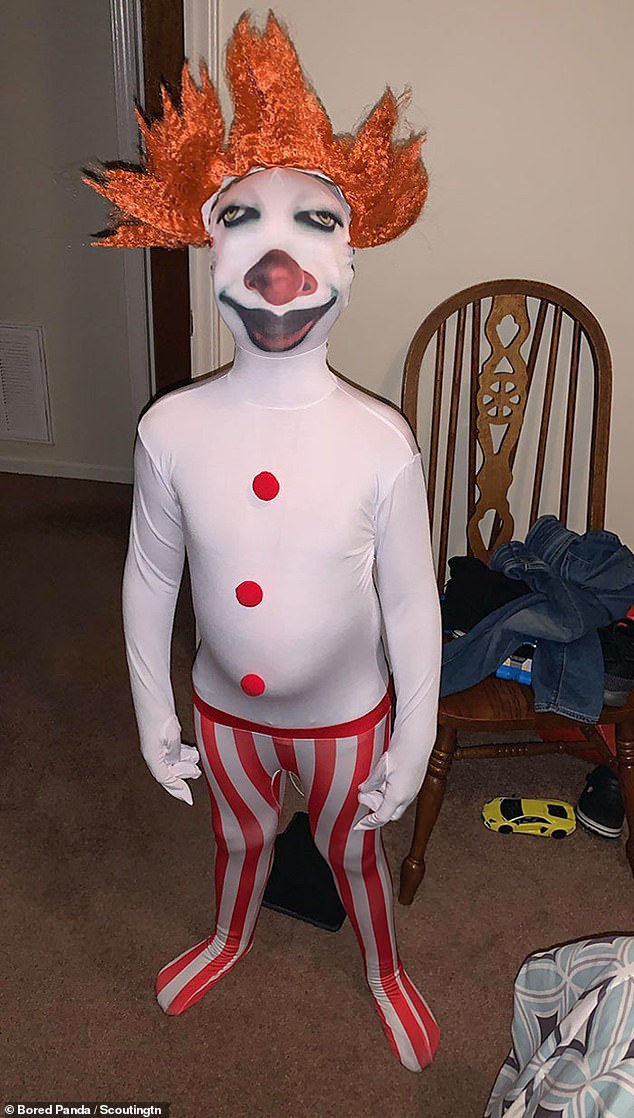 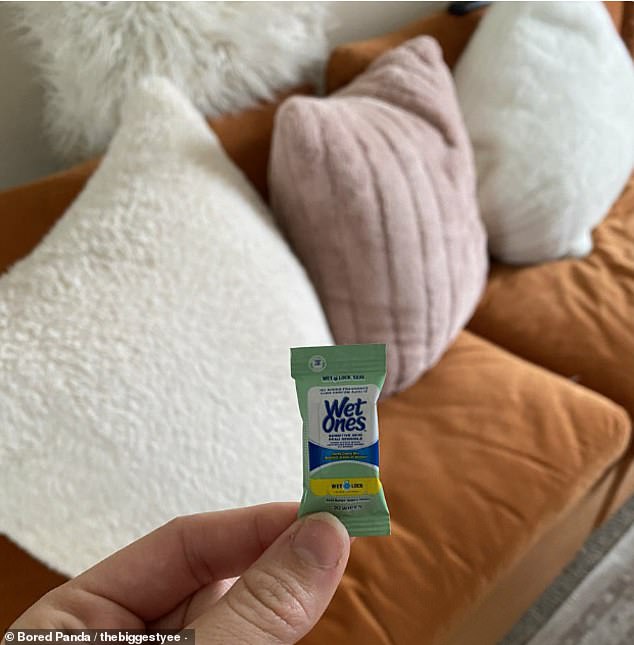