The corridors of the Sydney office of Opera Australia echoed with spontaneous applause on Friday.

It wasn’t celebrating a soprano hitting a new high note, or a tenor’s warbling declaration of devotion to an ailing lover. It was for something more mundane, but significant. They would have a Melbourne season. 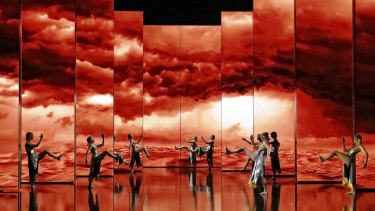 In May, Melbourne’s State Theatre will see a revival of Sydney’s sumptuous, critically-raved-over Aida from 2018, a groundbreaking production where the set is an array of 10 metre-high digital LED screens that add effects including a galloping horse, snakes, and a huge panther to the grand Verdi opera.

It will be accompanied by Verdi’s Ernani, in partnership with the prestigious La Scala in Milan, a rare production of a hectic melodrama with a thrilling score.

But, until the company’s board met last Friday, nobody knew whether any of this was doable. The company is under intense financial strain, after a year of heavy pandemic losses that resulted in musicians being made redundant and a fire sale of costumes and props.

And a Melbourne season will, it is likely, cost money rather than make money, especially if they are subject to the government-mandated venue capacity caps.

Nevertheless, artistic director Lyndon Terracini says it is an “absolute relief” they can get here.

“There’s a palpable sense of joy in the company,” Terracini says. “The board signed off on it… the news spread like wildfire and people walked into the corridor and applauded.

“I think in the really tough times it’s important for cultural organisations to stand up. We’ve lost a significant amount of money… a tremendous hit, a body blow. But nevertheless it was vitally important for us to get off the canvas, to put shows on and have people working – to build morale, but also to make sure to maintain people’s skills. Because [singing or playing opera] is like being an athlete. If you don’t do it for six months, well suddenly you can’t run a marathon.”

Not to come to Melbourne in 2021 would have been a controversial decision. OA formed in 1996 in the merger of the bankrupt Victoria State Opera and the Australian Opera, leaving a background murmur that Melbourne lost out on the deal. There may also have been questions about the $1 million subsidy the Victorian government pays to OA each year. 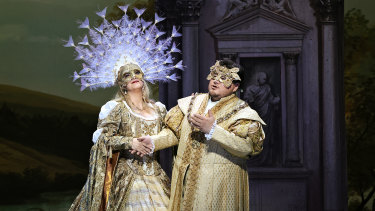 Terracini hopes the venue can negotiate an increase of the “COVIDsafe” limits set by the Victorian government – 75 per cent of total capacity or 1000 people, whichever is lesser. The State Theatre seats around 2000 and especially at the moment every ticket sale counts, for a company that usually relies on the box office for 80 per cent of its income and supports hundreds of permanent employees.

“Yes we’re still losing money,” Terracini says. “But … if we can get to 85 per cent, 100 per cent capacity that would be absolutely fantastic.”

“It’s the new world for opera,” he says. “You’ll see a galloping horse coming from the back of the stage with the rider, the messenger coming. There are snakes and there’s a big panther in it, it’s tremendously exciting and we have had a huge reaction to it – in fact it’s the biggest selling production of Aida we’ve ever had in Sydney.

“If you don’t make Aida huge, people are disappointed. That and Ernani they’re big shows, they’re difficult, they’re hard to sing, you need a lot of people, you need big choruses. So I was really keen to bring the two of them to Melbourne.”

Terracini says the pandemic shutdown has renewed his focus and determination for OA to be one of the leading companies in the world.

“What it’s taught us is how much we appreciate the privilege of being able to make music, to do the things we actually love doing,” he says. “It’s been a very difficult time for a lot of artists… when your livelihood dries up and you can’t work it makes it very difficult, but I think the underlying thing is that will, that determination to play is greater than it’s ever been.

”The love for the art form is greater than it’s ever been and the joy in seeing the response from the audience is a reminder of that.“