A 40-stone junk food addict has given up her love of pork pies to shed nearly half her body weight – but is now having to fundraise to remove a 2st apron of excess skin left swinging between her legs.

Steffi Dobbs, from Abertillery, South Wales, dropped a whopping 17st in two years and now weighs 22st 5lbs after years spent cooped up at home too afraid to even open the door for the postman.

Due to her weight, the super slimmer admitted she relied on her fiancé Mark Fox, 52, for everything for years and even missed her brother’s wedding because she was too depressed about her size and had limited mobility.

However, her amazing weight loss has left the 29-year-old with two stone of loose skin hanging from her belly to her knees, and she has been feeling even more self-conscious and she won’t even allow her fiancé to see her naked.

Now weighing 22st 5lbs, Steffi is desperate to continue her weight loss journey and lose a further 10st before undergoing a £6,000 op to remove the excess skin that hangs ‘almost to her knees’.

As tummy tucks are classed as a cosmetic procedure, it’s not usually available on the NHS and is usually only recommended for people with a healthy BMI. 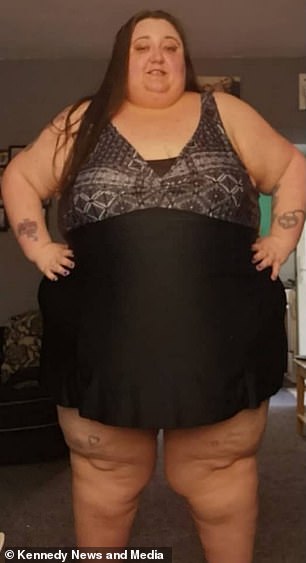 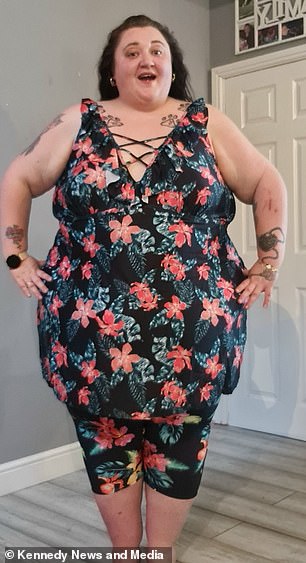 Steffi Dobbs, from Abertillery, South Wales, went from 40st, left, to 22.5st, right, after dropping a whopping 17 stone in two years after years spent cooped up at home

Steffi’s weight loss left her with 2st of loose skin hanging from her belly to her knees. She wants to lose a further 10st and fund a £6,000 tummy tuck to get rid of the skin and get on with her life

Steffi said: ‘The skin affects my life daily. I hate it. If I didn’t have it, I would be a lot more confident in myself.

‘I have a full stomach apron which hangs down nearly to my knees.

‘I still won’t let my fiancé see me naked and I’m always buying clothes that are a lot bigger than me just to cover my stomach.

‘To me, I feel depressed with the skin and I know it’s just showing a massive achievement after losing the weight but it really gets me down.’ 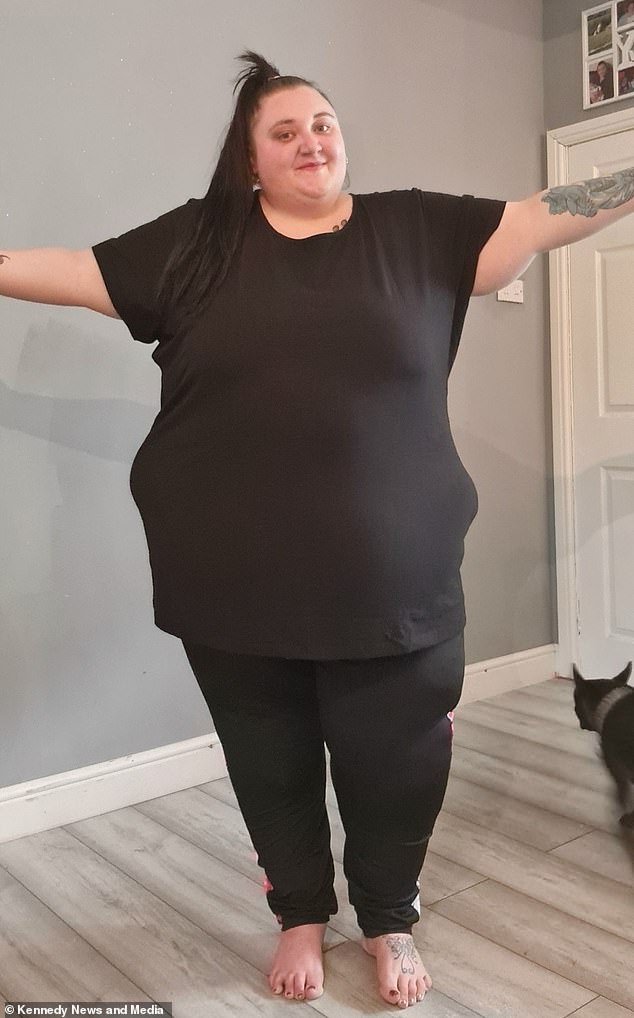 Steffi used to be depressed about her weight and would hide at home. Now she has regained mobility after dropping nearly half her body weight, pictured

At her heaviest, Steffi was too self-conscious to leave the house, and even missed her brother’s wedding because she could not bear going 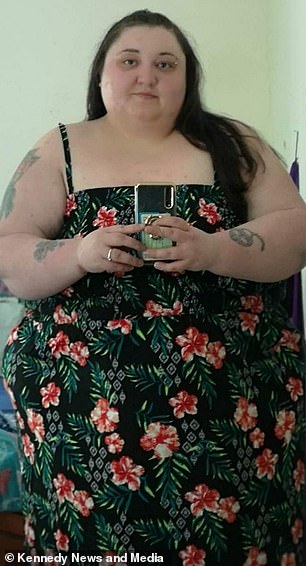 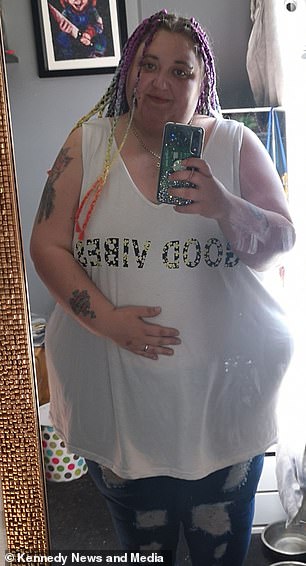 The junk food addict would drink 2 litres of pop a day before, left. Now, right, she has a healthier diet, but wants to lose a furter 10 stone

Steffi, who doesn’t currently work, said she’s struggled with her weight since school and had to wear a male uniform as she was too big for the female sizes.

At her heaviest, Steffi became dependent on 52-year-old fiancé Mark Cox as her weight left her too depressed to leave the house.

Steffi said: ‘I wasn’t eating during the day due to my depression.

‘I slept most days so I would only eat during the night which meant my body wasn’t getting rid of the fats I was eating because I wasn’t exercising to burn the fat off. 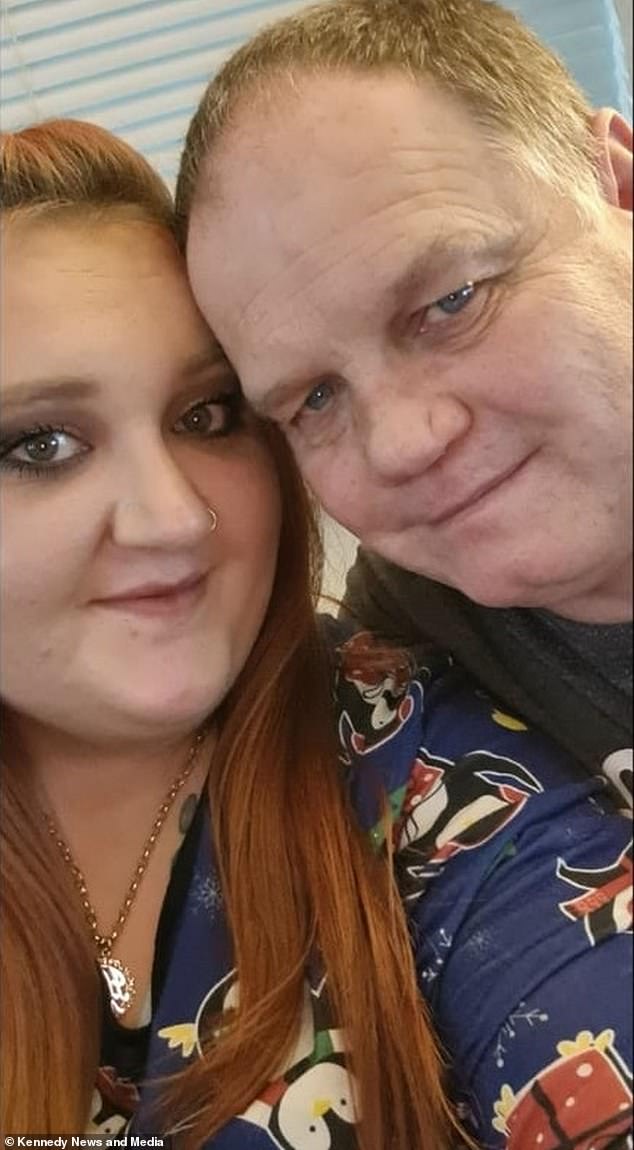 At her biggest, Steffi admitted she relied on her fiancé, Mark Fox, 52, right, for all her basic needs

‘Then when the weight started to drop off me, I was able to clean the house and move a lot more.’

After missing her brother’s wedding due to her size in February 2018 and worried about her health, Steffi ditched pork pies and sweet treats and started to eat three home-cooked meals a day.

Instead of guzzling down litres of fizzy pop, Steffi now sips two litres of water a day.

Having tackled her diet, Steffi started to exercise using YouTube videos and then moved onto working out on a treadmill Mark, who worked as a builder, bought her. 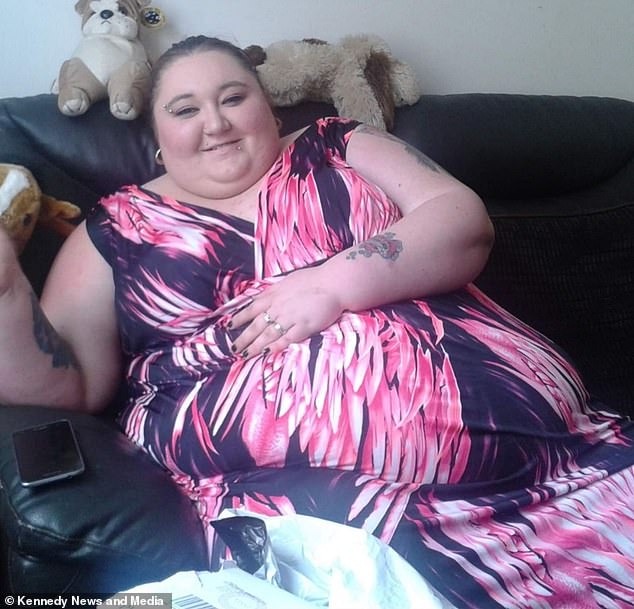 The 29-year-old, who is currently unemployed, had very limited mobility at her heaviest weight 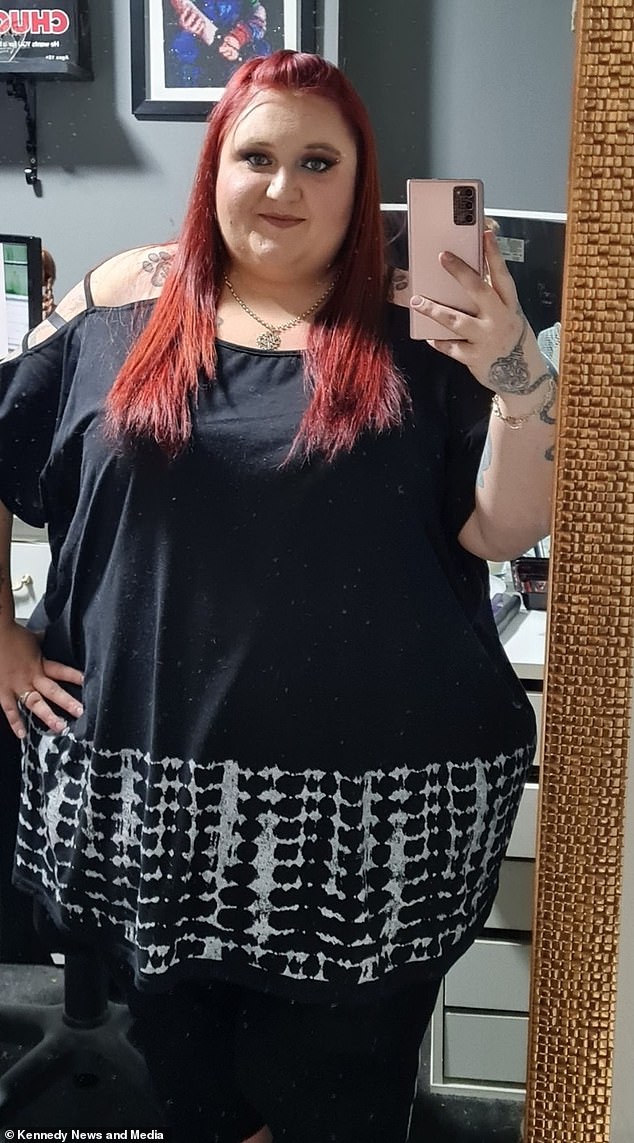 Steffi hoped to regain confidence with her weight loss, but her extra loose skin has left her self-conscious and she won’t let Mark see her naked 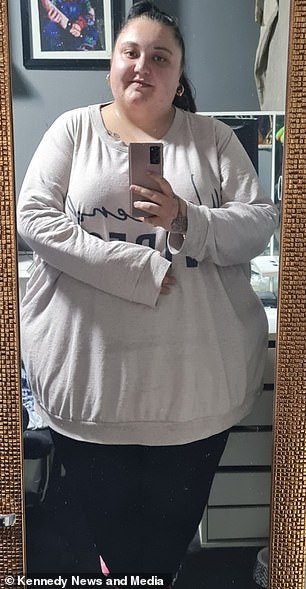 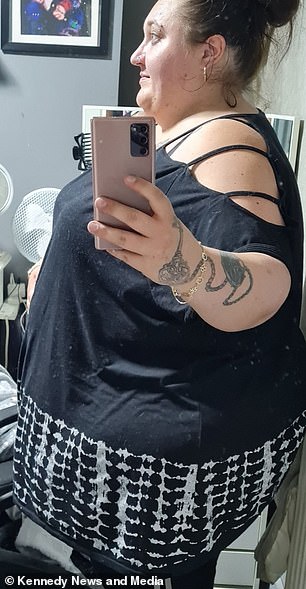 Steffi admitted she became a shut in due to her weight. She has now lost half of her body weight, pictured

Steffi said: ‘I decided to lose weight not just for me but for my family and my fiancé. My fiancé would do everything for the both of us.

‘He would work, come home, clean the house, cook us dinner and take care of our dogs and he also did the shopping.

‘I was housebound for two years due to being morbidly obese and suffering with anxiety and depression so I didn’t see my family much.

‘I also missed out on my only brother’s wedding due to my weight and anxiety. That’s when I knew I needed to do something about my weight.

‘It definitely affected my confidence and health. I hated myself so much I wouldn’t leave the house or have any visitors so it was just myself and my fiancé. I shut myself out from the world. 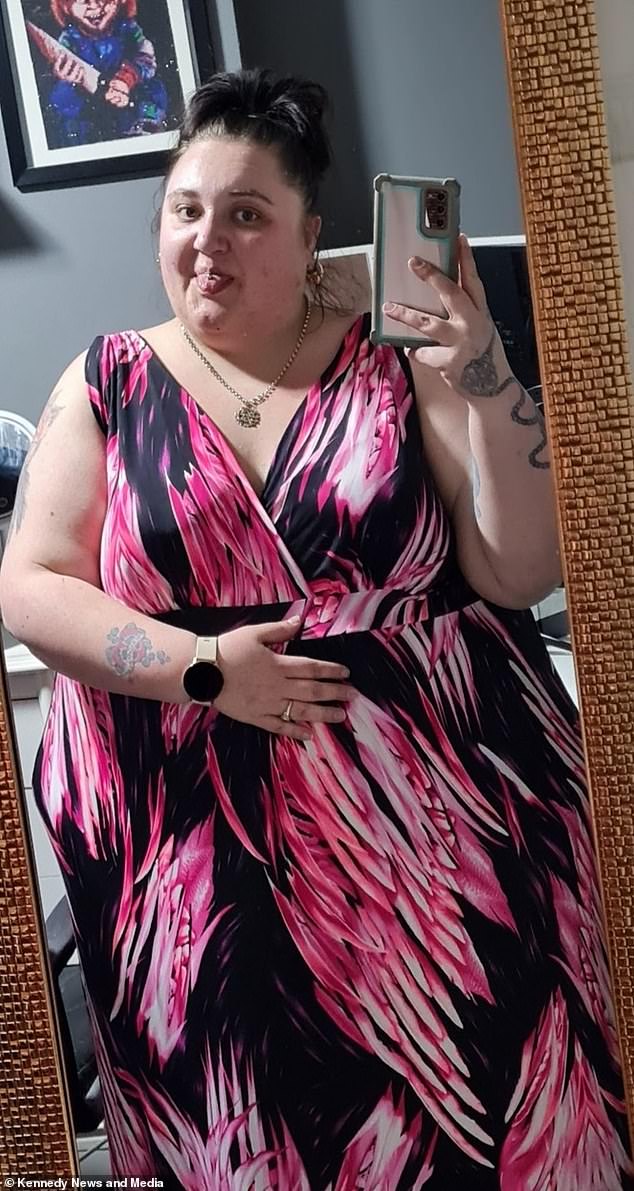 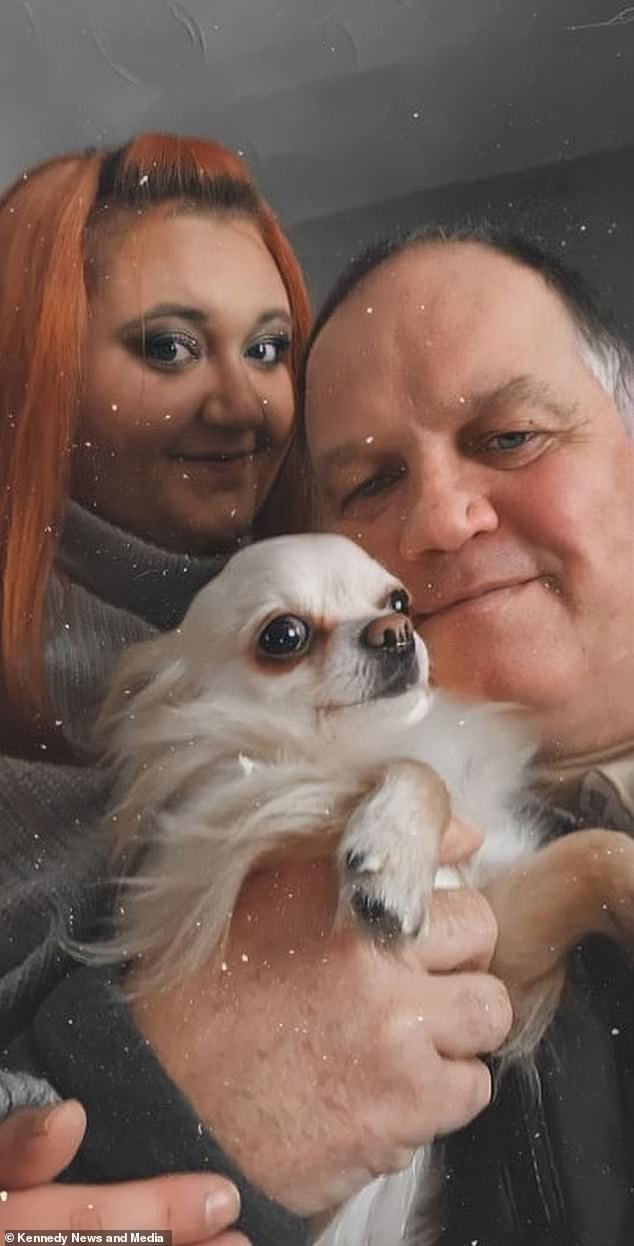 When Steffi was at her heaviest, Mark, left, would clean, cook and do the food shop for her and look after their house

‘I couldn’t even answer the door to the postman because my anxiety got so bad.

‘I ​couldn’t stand up or walk very far, the furthest I walked was to the bathroom and back to the bedroom. My legs and back would give way.’

Steffi is hoping to lose a further 10st before she goes under the knife to have the skin removed.

Steffi said: ‘I am one hundred percent healthier after losing the weight and I’m the proudest I’ve ever been in my life.

‘I can walk, cook, clean, see family and do things for my fiancé instead of him doing everything for me.

‘It’s definitely not easy but you need to stick with it. Getting rid of the skin would change me completely. It’s the final step, I’d feel amazing.’

Snacks: One pork pie, family pack of crisps, three bars of chocolate, one or two Mr Kipling cakes and two litres of pop

Breakfast: One boiled egg and one slice of brown toast