Obese nurse, 35, reveals how she lost a staggering 109LBS so she could take better care of her COVID-19 patients – after fracturing her foot at work amid years-long struggle with her weight

An obese nurse has revealed how she shed almost half her body weight in order to take better care of her coronavirus patients.

Megan Hill, 35, lost an incredible 109lbs by curbing her sweet tooth and walking an extra four miles a week, going from a bulky 244lbs to a svelte 135lbs in a matter of months during the height of the COVID-19 pandemic.

The medical professional, from Fort Worth, Texas, had long struggled with her weight when her hospital began being flooded with coronavirus patients; she had suffered a foot fracture because of her size, and doctors advised that her job would be much easier on her body if she was slimmer.

Megan, who is mother to two children, Alyssa, 18, and Vince, 14, set out to transform her body in September 2019, however she believes that the stress of the pandemic played a major part in her weight loss. 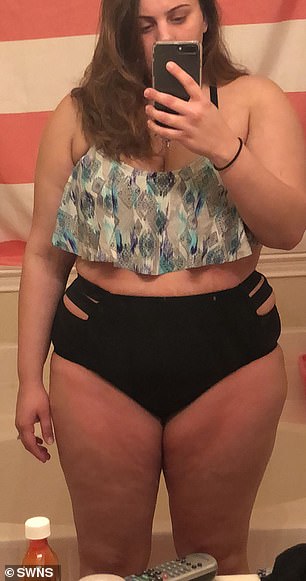 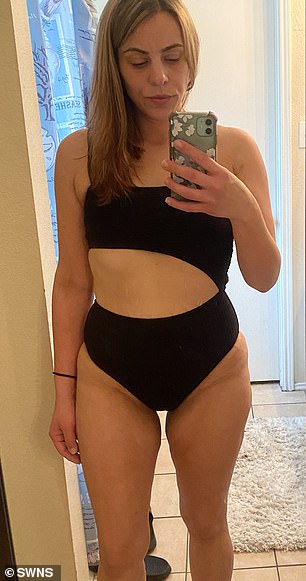 Transformed: A Texas-based nurse has revealed how she lost more than 100lbs after spending years struggling with her weight 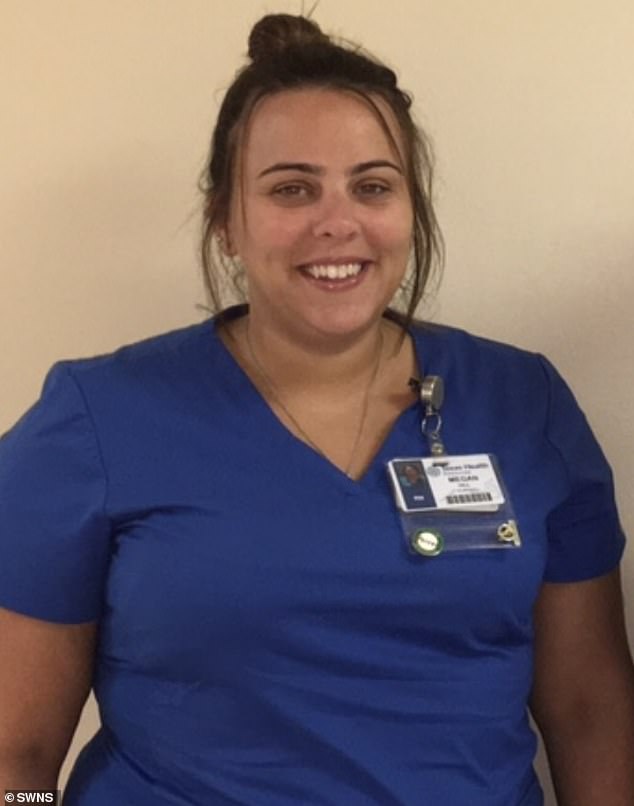 Struggle: Megan Hill, 35, says her weight started to take a toll on her job, causing her to fracture her foot. At her heaviest, she weighed 244lbs (pictured) 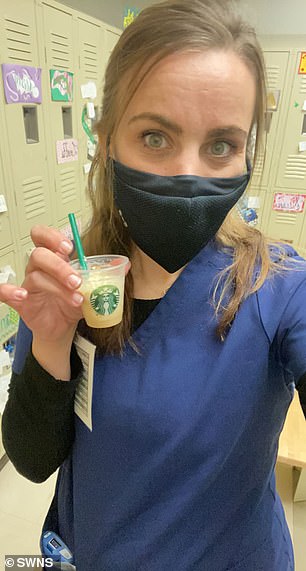 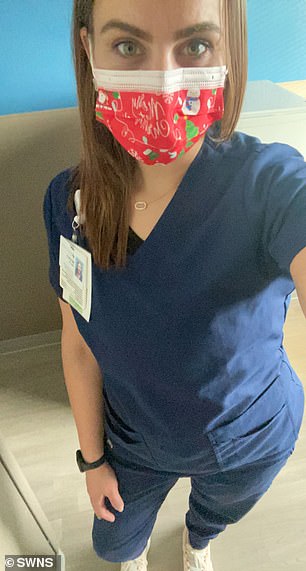 New woman: The nurse (seen recently) has to be on her feet throughout the day and her weight made it hard for her to do this comfortably, so in September 2019 she set out to shed pounds

‘I have a lot of chronic pain in my foot and I’m a floor nurse,’ she explained. ‘The doctor says that he thinks because I had so much weight on my right foot, I fractured it.’

The mother admitted that her weight took a serious toll on her, both mentally and physically, explaining that she was often left in pain, while her appearance made her depressed.

‘It was really painful being obese,’ she said. ‘I was depressed about my looks. I tried to lose weight so many times and I’d done so many different diets.

‘I’ve been overweight since I had my son. Clothes never fit me, I couldn’t order anything online.’

Although Megan had tried numerous diets after giving birth to her son, so when she committed herself to getting healthy in the fall of 2019, she decided to follow a more balanced regimen, rather than attempting a drastic eating plan.

She came up with her own low-carb diet, and found novel replacements for her favorite sweet treats.

‘I’m a sweet tooth fiend so I had sugar-free cool whip with orange flavoring in it instead of cake,’ she said. ‘I watched what I ate a lot.’

Megan swapped her normal diet of a bacon, egg and cheese sandwich for breakfast with the healthier option of scrambled eggs with vegetables.

Healthy: Although Megan began trying to lose weight in the fall of 2019, she says the stress of the pandemic pushed her to shed even more pounds, allowing her to better care for patients 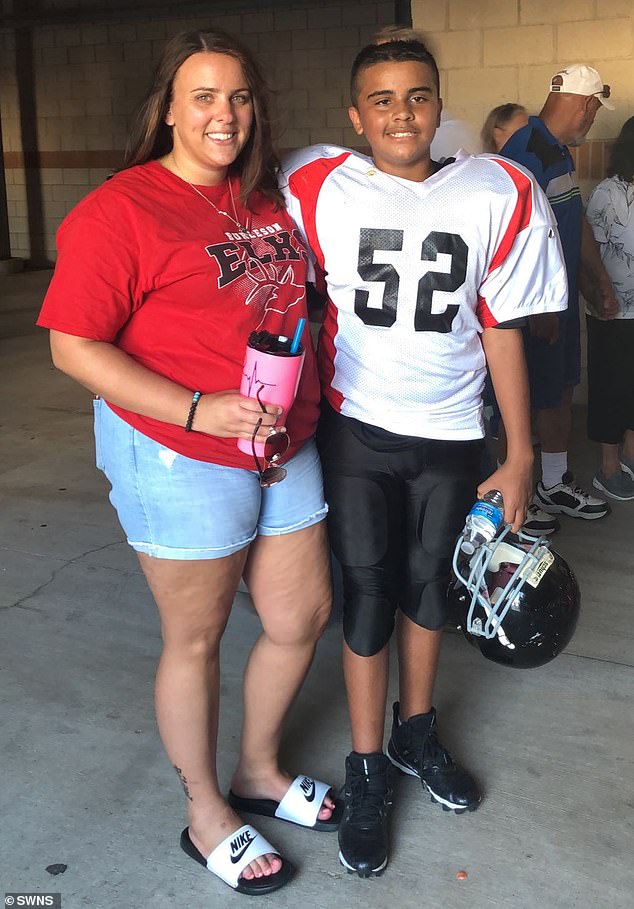 Uphill: The mother-of-two started piling on the pounds after giving birth to her son, Vince, who is now 14, and despite attempting several fad diets, she struggled to lose any weight 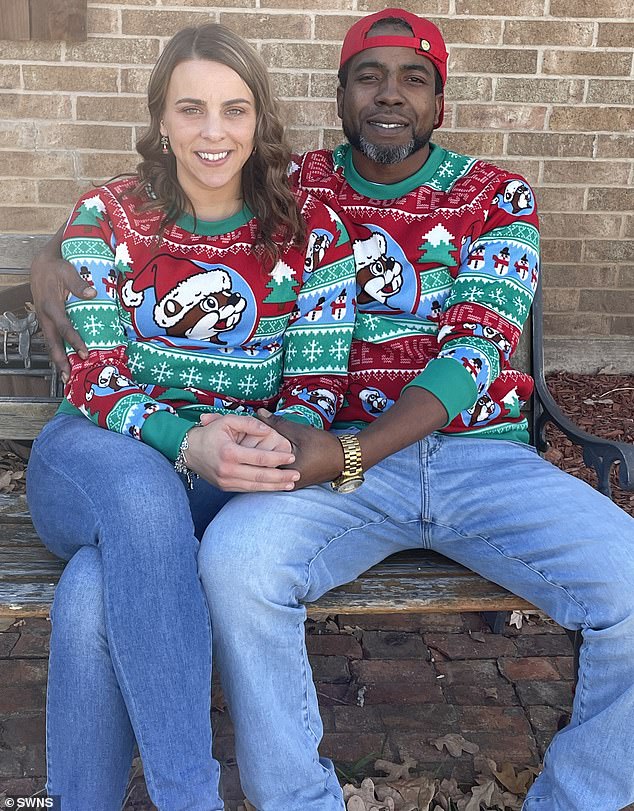 Healthy: However, once Megan (pictured with her boyfriend) started following a sustainable low-carb meal plan, which she put together herself, she started to see a real difference

She steered clear of her favorite calorie laden foods like candy, chips, cakes, chicken tenders and chili dogs and instead has a turkey sandwich or a salad for lunch and a protein-based dinner like creamy spinach chicken.

Megan also incorporated more exercise into her daily life, explaining: ‘I walked four miles a week with my mom and my grandmother.’

She also believes that the stress of the pandemic with COVID patients needing care contributed to the weight loss that saw her go from a size 20 to a petite size three.

‘I had so much stress with COVID,’ she recalled.

‘At first they cut our hours at work because in the beginning COVID wasn’t as prominent in Texas, it was more focused in New York.

‘I got divorced in February 2020 and became a single mom with two kids and financial stress so I’m sure the stress contributed to the weight loss.

‘Then COVID built up and we ended up getting so many sick young people.

‘I was transferred to the transplant department but I still worked with COVID patients twice a month.

‘I didn’t even let my son go to school because I work with very vulnerable transplant patients who cannot get sick with COVID.’ 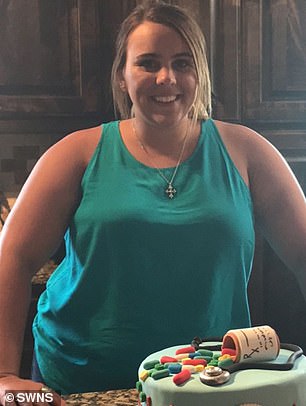 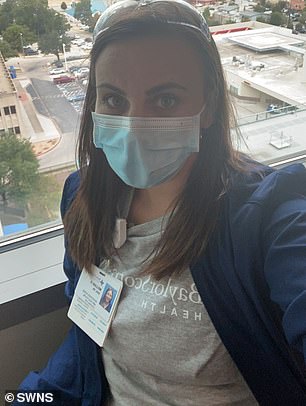 Plan: Megan admits she has a real sweet tooth, so she set about finding alternatives that would curb her cravings without ruining her diet 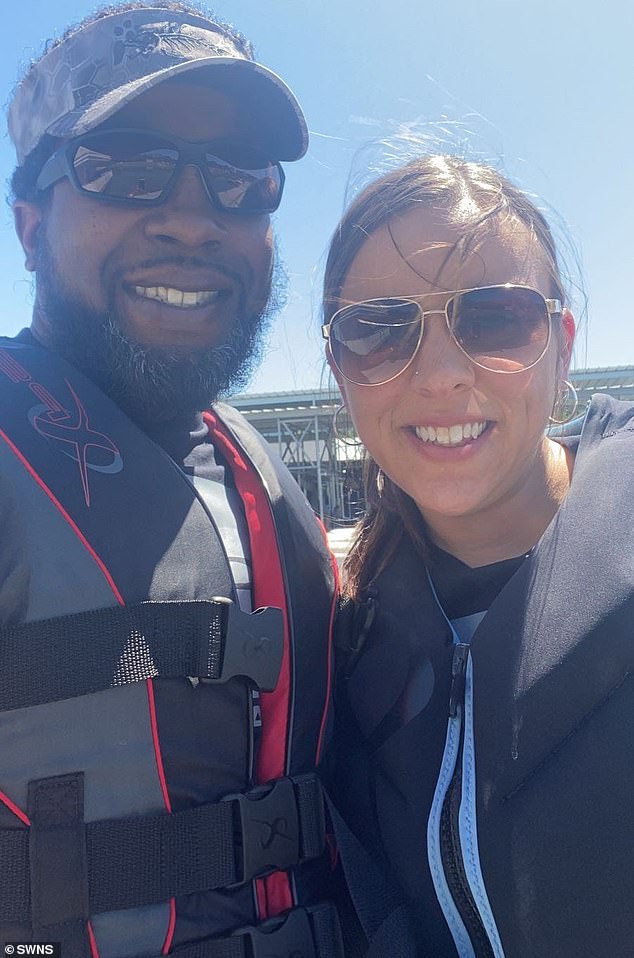 True love: Megan’s weight loss journey was made that much easier with the support of her boyfriend, Samarion Evans, 37, whom she started dating last year

Happy: Megan added that she feels ‘alive’ now that she has lost the weight and able to enjoy activities she never took part in before

But Megan added there was a happier motivation behind her weight loss too – a love affair with a former high school crush who messaged her two months after she began losing the weight.

Megan and Samarion Evans, 37, an order selector in a warehouse, are now in a relationship.

‘I had a crush on him in high school but he was two years older than me,’ she said. ‘He reached out to me in November 2019 just as I was starting to lose the weight.

‘I was still a little thicker but I was finally getting confident in my body and he reached out at the perfect time.

‘He loves the weight loss and he calls me beautiful all the time, but he never told me that I wasn’t beautiful when I was bigger.’

Megan hopes to have skin removal surgery to remove the loose skin her weight loss has left her with – but she added that Samarion appreciates her body as it is.

‘Now my boobs are gone and my butt’s not as big but he actually grabs my loose skin and says he loves every piece of me.’

Megan added that she feels ‘alive’ now that she has lost the weight and able to enjoy activities she never took part in before.

‘I feel like I’m not just sleeping, I’m actually living for the first time in my life.