An Oath Keepers leader, Jessica Watkins, committed a “crime of terrorism” when she “gleefully” participated in a mob that stormed the U.S. Capitol, prosecutors said Tuesday as they argued that she should be detained as she awaits trial. Watkins became the third Capitol rioter accused by prosecutors of a crime of terrorism, following two Proud Boys members, Dominic Pezzola and Ethan Nordean.

Unlike involvement in a foreign terrorist organization, domestic terrorism is not itself a criminal charge, but it is a factor that judges can consider when deciding whether to release defendants on bail and when determining the length of their sentence if they are found guilty.

Watkins was indicted this month on four charges, one of which was aiding and abetting the destruction of government property — a crime that, if found to be politically motivated, could be considered terrorism. Prosecutors argued Tuesday that because Watkins’ actions were “calculated to influence or affect the conduct of government,” it amounted to a federal crime of terrorism and meant that she should be detained before trial.

During a hearing Tuesday, the judge delayed making a decision on whether Watkins should remain behind bars until trial, and questioned whether her crime qualified as a crime of violence. The judge said the case poses a “threshold legal question” which could affect potentially dozens of other similar cases, and ruled that Watkins will remain in detention as she awaits her next hearing. 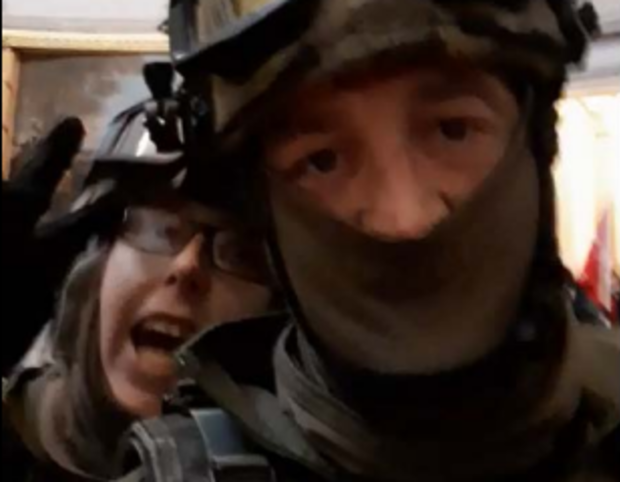 Prosecutors said Watkins, a U.S. Army veteran who is now the self-described commanding officer of the so-called Ohio State Regular Militia, was filmed with other Oath Keepers members “gleefully embedded” in a mob outside the Capitol. Although Watkins argued that she did not intend to destroy property, prosecutors say she participated in a violent mob that broke a door, which she passed through moments later to forcibly enter the U.S. Capitol. She and other Oath Keepers were seen on video moving through the crowd together in a tactical “stack” formation to reach the building.

While at the riot, Watkins used a walkie-talkie-style app called Zello to communicate with other associates, prosecutors said. She said on the app: “We have a good group. We have about 30-40 of us. We are sticking together and sticking to the plan.”

That plan became clear, prosecutors said, when an unknown voice said on the Zello app: “You are executing citizen’s arrest. Arrest this assembly, we have probable cause for acts of treason, election fraud.”

A voice believed to be Watkins responded, “We are in the mezzanine. We are in the main dome right now. We are rocking it. They are throwing grenades, they are fricking shooting people with paint balls. But we are in here.”

An unknown male replied to her, saying, “Get it, Jess. Do your f***ing thing… Everything we f***ing trained for.”

While prosecutors have so far only invoked terrorism when arguing that Watkins should be detained, legal experts say allegations of terrorism could lead to hefty prison sentences — a threat that will surely loom over defendants as their cases progress. If a judge finds Watkins guilty of a crime of terrorism, she would face an automatic 10-year prison sentence on that charge alone.