The federal Treasury has pushed back at claims from the Reserve Bank that the nation’s immigration program has contributed to years of slow wages growth, saying there is simply no evidence.

Treasury deputy secretary Jenny Wilkinson on Monday said while there might be short-term impacts, especially if there was a large, unanticipated change in migration levels, over the longer term there was no research that suggested an ongoing hit to local residents’ wages. 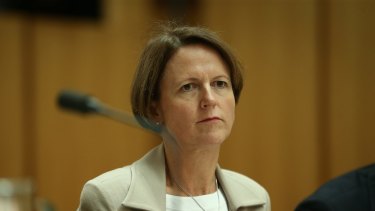 Treasury deputy secretary Jenny Wilkinson says there is no evidence to back claims that migrants drive down wages growth.Credit:Alex Ellinghausen

RBA governor Philip Lowe ignited a public debate over immigration in July when he used a speech to argue the nation’s high levels of immigration were partly to blame for years of low wages growth while allowing businesses to avoid properly training their staff.

RBA research obtained by The Sydney Morning Herald and The Age under freedom of information laws the following month showed “changes in Australian immigration policies” were one of the long-term structural factors that had contributed to spare capacity in the jobs market and “subsequently low wages growth”.

The central bank, which on Tuesday will debate whether to continue with plans to slightly wind back its quantitative easing program to deal with the current COVID lockdowns affecting NSW and Victoria, wants to get wages growth back above 3 per cent to help the economy grow faster.

Ms Wilkinson, addressing the Australian National University’s Crawford Leadership Forum in Canberra, said there had been extensive research about the relationship between immigration and its impact on wage levels.

“The overarching conclusion seems to be … there is really very little evidence that over the longer term there is a negative impact from migration on wages. To the extent that there is, these estimates are very small,” she said.

“And in the literature, honestly, it varies from being sort of small negatives in some studies to positives in other studies.”

There have been reports from some parts of the business community of pressure on wages since the start of the coronavirus pandemic due to the closure of the international border. Net migration has collapsed, with declines across skilled migrants and temporary workers such as international students.

Ms Wilkinson said sharp and unexpected changes in immigration numbers were likely to have caught out businesses.

“There’s no question that changes in migration which are large and unanticipated are much more likely to have short-run effects on wage and employment outcomes,” she said.

“It’s certainly the case that a shock like the pandemic, which has significantly affected the stock of some of our temporary migrants – it would be surprising if that didn’t have a short-term wage impact.”

The turnaround has prompted suggestions Treasury may be too optimistic about the recovery in migrant numbers.

Ms Wilkinson said once the international border opened, there would be a lift in demand from people wanting to call Australia home.

“I think there’s quite a lot of people around the world who are young, who are skilled who are smart, and who will be attractive for Australia, into the future,” she said.