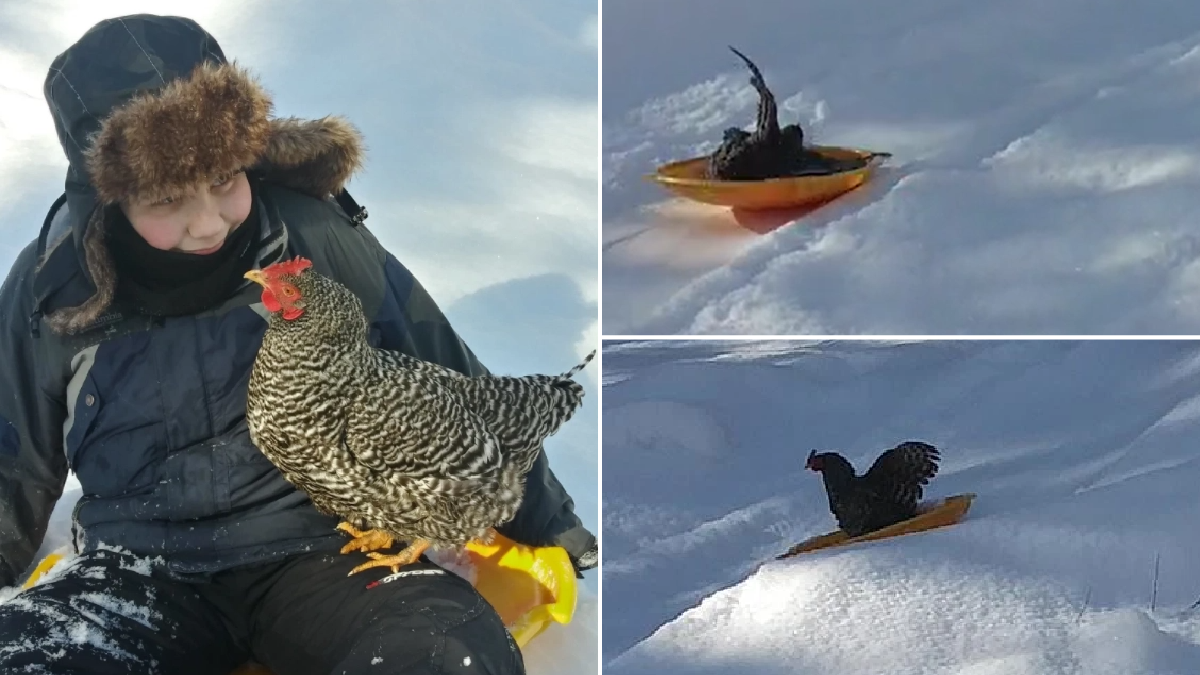 Allow us to introduce Teddy, a chicken whose hobbies include sledding and kicking back with her best bud Luke Read.

Teddy Nugget, a Plymouth Rock chicken, and Luke, 11, are ‘inseparable.’

Luke, who lives with his mum Angelina, 40, dad Clint, 46, and sister Anya, 13, in Shelburne Falls, Massachusetts describes the chicken as his ‘best friend.’

Kindergarten (Year One) teacher Angelina tells Metro.co.uk: ‘Luke loves his chickens and always has since he was very little,’ adding that he ‘has the biggest heart for the love of animals I know.’

Even though snow tends to freak out most chickens, including her siblings, Teddy doesn’t mind it at all – in fact, she seems to love nothing more than sledding down a snowy hill with Luke.

Luke, who has a slight hearing impairment and talks with Teddy sat peacefully on his lap, says: ‘I was just curious to see what the chickens would think of sledding.’

Angelina says: ‘Chickens usually don’t like the snow because of the whiteness and the fluffiness.

‘They think that there’s nothing underneath the snow, so they will avoid it at all costs. But Teddy likes snow.’

‘Then I tried the other chickens to see what they think. None of them really liked it.’

How did the bond between chicken and boy take flight? Angelina says: ‘It started about a year and a half ago when we adopted two abandoned chickens.

‘Luke was instantly in love with our new family members, named Wendy and Francis.

‘We promised Luke we’d get some chicks in the spring from a local farm that serves individuals with disabilities that my husband is attached to.

‘We adopted four chicks: Teddy Nugget, Penelope von Sweet, Big Feets, and Clover. We were also fortunate to adopt a small rooster, Jelly Jam, who was going to be “let go” this fall.’

From the start, it was clear that Teddy was different.

Though the other chickens didn’t take to her, she quickly bonded with Luke, who has loved birds since he was a two-year-old.

Luke says: ‘From the beginning, she would cry out when no one was there in the middle of the night.’

Angelina explains: ‘From the get go, Teddy was very unique,’ adding: ‘She was very vocal and Luke was always wanting to try to comfort her when she was just a chick.

‘He would take her out, and we have a little doggy playpen, and she would just sit on him there and just love him.’

‘While the other chickens did not like snow, Teddy would follow Luke around while he played outside.

‘One day after being turned down to go sledding with his friends and feeling quite bummed out, he went outside and spent time with Teddy.

‘She always made him feel better. She seemed like she wanted to join him on the sled so they went down slowly, and we discovered that Teddy likes to sled.

‘Now when she free ranges, it seems like she is asking Luke to go sledding.

‘Though they still go together, she also enjoys her solo rides in the saucer.’

Angelina says that, even though Teddy will sometimes jump off the sled when she rides down with Luke, when she’s on the sled by herself she always stays on and seems to want to go again.

She adds: ‘If she was at all afraid or anything she would fly off, but she prefers to stand on the sled and go multiple times.’

Angelina says one of the things she likes best about her son’s friendship with the bird is when the pair are just relaxing outside together.

‘He’ll be laying in the snow, and she’s right on top of him, and she will just be really chill’, she explains. ‘They’ve got a really cool bond.’

Luke says Teddy is ‘like a best friend since I don’t really get to see my friends’.

‘It’s been tough on the kids,’ says Angelina, ‘Not being able to hang out with their friends.

‘It has helped make a stronger bond with Teddy because you always have your best friend there.’

Angelina adds: ‘She’s more than happy to just sit on your lap, kind of like a dog.

‘Sometimes she gets a little feisty and will peck Luke.’

She adds: ‘Most kids would get upset, but he just laughs.’

Angelina says her son has got to the point where he understands the chickens pretty well.

‘It’s amazing,’ she says, ‘They get sad, they get mad – Luke’s been able to get what they’re thinking with their squawks.

‘When you take the time to get to know the animal you see that they’re much more complex. There’s more there.’

The chickens aren’t the only animals the Read family cares for, with Luke saying: ‘We have quite the zoo here.’

All told, the family has seven chickens, four dogs, ‘at least 30 fish’, and Anya has a hamster.

When asked if they plan on getting any more animals, Angelina says ‘Not right now, I think we’re maxed out.’

When he’s older, Luke plans on running a chicken rescue, where he can take in old and unwanted chickens that don’t have anywhere else to go.

Angelina says: ‘That’s actually how we got our Rooster, Jelly Jam.

‘Up the road, a neighbour had one too many roosters, and he didn’t know what to do, so we took him in.’

As for Teddy’s future ambitions, Angelina jokes: ‘Teddy might aspire to take on bigger hills and try the bobsled team in the Winter Olympics.’