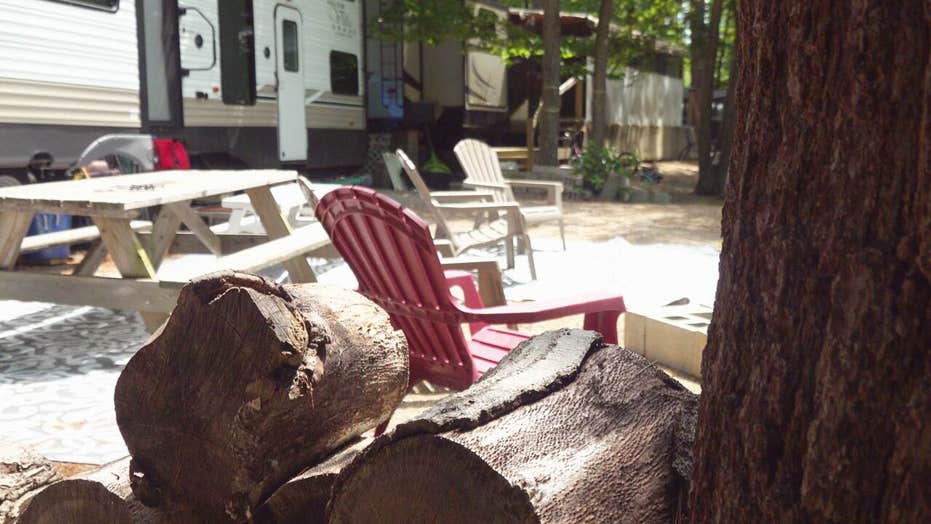 As the summer of social distancing rolls on, families desperate for some time out of the house are turning to RV camping – in record numbers.

Josh Jackling is following in the footsteps of his grandparents — and their renovated school bus.

The vintage 1954 vehicle was purchased in the early 1970s by Jackling’s grandparents, Joseph and Inez. The bus was fixed up and taken on several family road trips that spanned more than 275,000 miles and criss-crossed two continents.

Now, Jackling is preparing to hit the road with his wife Carolyn McKenna, much like his adventurous grandparents.

MORE AMERICANS WOULD ALLEGEDLY CONSIDERING LIVING OUT OF A VAN TO SAVE MONEY, PAY OFF DEBT: SURVEY

This time, though, the journey won’t just be documented in family photographs. Social media will play a large role in their travels for at least the next two years — and they already have an Instagram account, Crowned In Style, which has been documenting the renovations they’re making to the bus before they finally hit the road.

“We tore everything out. Even the sides of the bus came off. We got the roof off and even raised the roof up,” Jackling, 42, told Fox News. “There’s really not much left on the bus that was even original. I changed the, the front axle, the rear axle, the suspension.”

COUPLE WHO SCRAPPED WEDDING DUE TO CORONAVIRUS BUYS CAMPER VAN INSTEAD

The pistachio green bus has a battery and water storage tank that can last roughly two weeks, even with its fully functional bathroom and kitchen. Solar array panels have been added to help generate electricity when off-the-grid.

Modern amenities Jackling and McKenna included were an electric toilet, a tiled shower with a heated floor, a four-person bar, a wood-fired stove and grill, two mini-fridges and, of course, built-in A/C and heating.

For lounging and resting, there’s a queen-sized bed, a couch and a dining area. Entertainment-wise, the couple has included a TV and workspace, where they can both use their computers.

TIKTOK CREATOR ALLEGEDLY TRADED A BOBBY PIN ALL THE WAY UP TO A MOBILE CABIN: VIDEO

McKenna, who is originally from New Jersey and lived in New York City for a time, never thought she’d find herself getting into the “van life.” But, after moving to California and marrying her husband, she became more open to the idea.

“I needed it to be nice. Like, sorry, I’m not just driving around with a shag rug and sparkly lights,” McKenna, 37, told Fox News. “[The bus] came out a lot nicer than both of us thought it would. And it’s definitely been a team effort in different ways, for sure.”

She also went on to explain that money was an important factor before they made their decision. The pair agreed to go into their adventure “debt-free,” so they sold some of their belongings and rented out their home in order to get their arrangements together.

There are no solid plans for their road trip itinerary just yet, but Jackling and McKenna are planning to hit the road in March.

“This current trip, we want to go up and do Canada and then all the way to Alaska and then travel around to see all of that,” Jackling shared.

While the couple decides on where exactly they want to go, their journey can be followed on Instagram or TikTok.