Earth’s magnetic field FLIPPED 42,000 years ago, creating a climate ‘disaster’ that wiped out the Neanderthals – and it could happen again, study warns

A reversal of the magnetic poles 42,000 years ago triggered catastrophic climate change and may have wiped out Neanderthals, a new study shows.

Aussie researchers have analysed the radiocarbon record from ancient trees in New Zealand that were alive when the magnetic poles flipped.

The trees revealed spikes in atmospheric radiocarbon levels, caused by the collapse of Earth’s magnetic field and changing solar winds.

But preceding the flip was a weakening of the magnetic fields, causing electrical storms, crimson skies, widespread auroras and lethal cosmic radiation that frazzled our early ancestors and the Earth’s wildlife.

The British author famously wrote in The Hitchhiker’s Guide to the Galaxy that ’42’ was the answer to life, the universe, and everything.

Researchers warn that the next apocalyptic polar flip ‘may be just around the corner’. 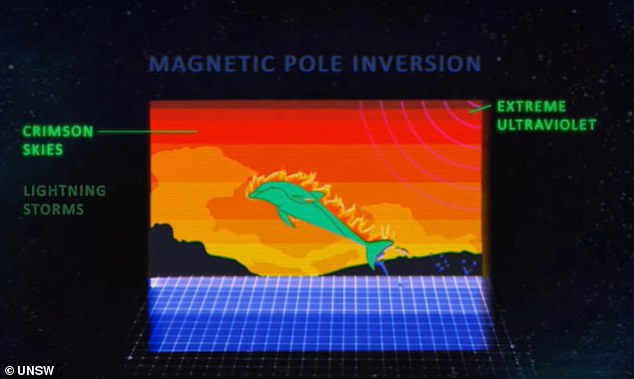 Preceding the flip was a weakening of the magnetic fields, causing electrical storms, crimson skies and lethal cosmic radiation that frazzled our early ancestors and the Earth’s wildlife

The international study has been co-led by UNSW Sydney and the South Australian Museum.

‘For the first time ever, we have been able to precisely date the timing and environmental impacts of the last magnetic pole switch,’ says Chris Turney, a professor at UNSW Science and co-lead author of the study.

‘The findings were made possible with ancient New Zealand kauri trees, which have been preserved in sediments for over 40,000 years.

‘Using the ancient trees we could measure, and date, the spike in atmospheric radiocarbon levels caused by the collapse of Earth’s magnetic field.’

Until now, scientific research has focused on changes that happened while the magnetic poles were reversed, when the magnetic field was weakened to about 28 per cent of its present-day strength.

But according to the team’s findings, the most dramatic part was the lead-up to the reversal, when the poles were migrating across the Earth.

‘Earth’s magnetic field dropped to only 0 to 6 per cent strength during the Adams Event,’ said Professor Turney.

‘We essentially had no magnetic field at all – our cosmic radiation shield was totally gone.’

Even though a GSM means less activity on the Sun’s surface, the weakening of its magnetic field can mean more space weather – like solar flares and galactic cosmic rays – could head Earth’s way. 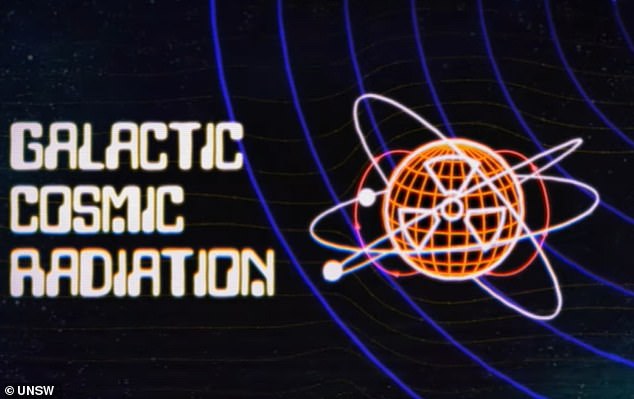 The lead-up to the magnetic pole reversal saw Earth’s magnetic field drop to only 0-6 per cent strength during the Adams Event. Earthlings almost had no magnetic field at all and its cosmic radiation shield was totally gone

An ancient kauri tree from Ngāwhā, New Zealand. Using radiocarbon dating on the trees – a technique to date ancient relics or events – the team tracked changes in radiocarbon levels

‘The ionised air fried the Ozone layer, triggering a ripple of climate change across the globe.’

The Adams Event could explain a lot of other evolutionary mysteries, like the extinction of Neanderthals and the sudden widespread appearance of figurative art in caves around the world.

Neanderthals were a species that lived alongside humans tens of thousands of years ago and were very similar in appearance and size but were generally stockier and more muscular.

Megafauna across mainland Australia and Tasmania also went through simultaneous extinctions 42,000 years ago. 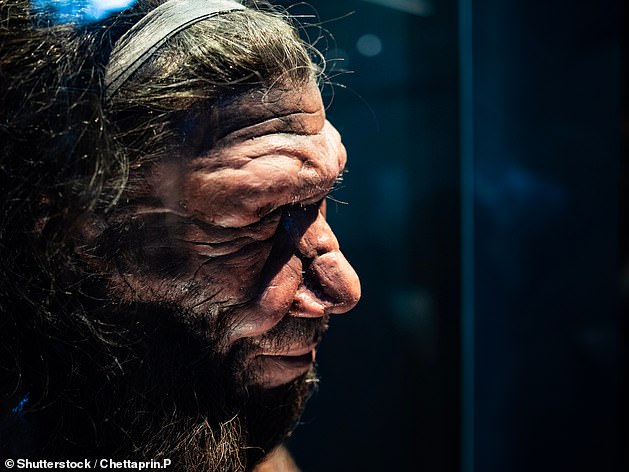 Pictured: A replica of a male Neanderthal head at the Natural History Museum in London

A reversing magnetic field could lead problems for turtles, birds and the compass

The exact impact of this flip isn’t known as it hasn’t happened in 780,000 years, however geologists and astronomers do have some idea.

One of the biggest impacts will be on animals that use the magnetic field for navigation – such as turtles and birds.

North on the compass will also point to Antarctica rather than Canada.

In terms of the impact on human life – the biggest risk depends on how weak the field gets during its transition.

According to a NASA study there’s no evidence it will disappear completely as ‘it never has before’.

However, there is a risk the field will weaken more than usual – it is variable already – during the change.

If it gets too weak more radiation will get to the Earth’s surface and could cause cancers and other issues.

However, as it will happen over a few thousand years humanity will have time to prepare for any weakening magnetic field.

The only other notable impact of a weakening magnetic field would be auroras at lower latitudes.

Dazzling light shows would have been frequent in the sky during the Adams Event.

Aurora borealis and aurora australis, also known as the northern and southern lights, are caused by solar winds hitting the Earth’s atmosphere.

Usually confined to the polar northern and southern parts of the globe, the colourful sights would have been widespread during the breakdown of Earth’s magnetic field.

‘Early humans around the world would have seen amazing auroras, shimmering veils and sheets across the sky,’ study co-lead Professor Alan Cooper, honorary researcher at the South Australian Museum.

Ionised air – which is a great conductor for electricity – would have also increased the frequency of electrical storms.

‘It must have seemed like the end of days,’ said Professor Cooper.

The researchers theorise that the dramatic environmental changes may have caused early humans to seek more shelter.

This could explain the sudden appearance of cave art around the world roughly 42,000 years ago, created by those that survived.

‘The common cave art motif of red ochre handprints may signal it was being used as sunscreen, a technique still used today by some groups.

‘The amazing images created in the caves during this time have been preserved, while other art out in open areas has since eroded, making it appear that art suddenly starts 42,000 years ago.’

While the magnetic poles often wander, scientists are concerned about the current rapid movement of the north magnetic pole across the Northern Hemisphere.

‘This speed – alongside the weakening of Earth’s magnetic field by around 9 per cent in the past 170 years – could indicate an upcoming reversal,’ said Professor Cooper.

‘If a similar event happened today, the consequences would be huge for modern society.

Professor Turney said the human-induced climate crisis is catastrophic enough without throwing major solar changes or a pole reversal in the mix.

‘Our atmosphere is already filled with carbon at levels never seen by humanity before,’ he said.

‘A magnetic pole reversal or extreme change in Sun activity would be unprecedented climate change accelerants.

‘We urgently need to get carbon emissions down before such a random event happens again.’

Earth’s magnetic field is created by the movement of liquid iron in the Earth’s outer core, some 1,800 miles below our feet.

The iron is super hot (over 5,432 degrees Fahrenheit) and as runny as water meaning it flows very easily.

As the liquid flows, it drags the magnetic field with it – and its corresponding North and South poles.

The geographic North and South poles are in a fixed position and are diametrically opposite one another.

The magnetic North and South Poles, meanwhile, are constantly moving and over time become misaligned with their geographic equivalents. 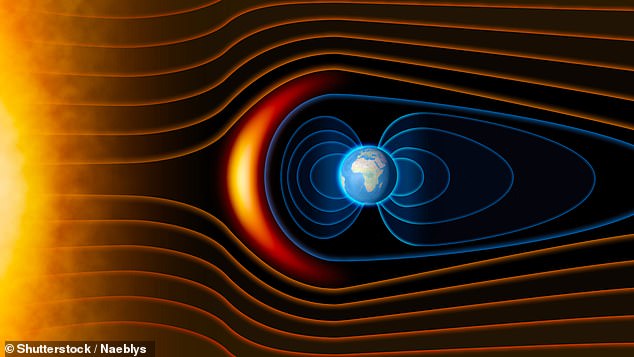 A swirling flow of iron 2,800 kilometres below the planet’s surface has influenced the movement of the magnetic field during the past 100,000 years

The magnetic field is still constantly changing today and satellites are providing new means to measure and track its current shifts.

Scientists already knew the magnetic poles temporarily flipped somewhere between 41,000 and 42,000 years ago, in an event called the Laschamps Excursion.

‘They swapped places for about 800 years before changing their minds and swapping back again.’

However, scientists didn’t know exactly how it impacted life on Earth – if at all.

For this study, researchers were able to create a detailed timescale of how Earth’s atmosphere changed over this time by analysing rings on the ancient kauri trees.

‘The kauri trees are like the Rosetta Stone, helping us tie together records of environmental change in caves, ice cores and peat bogs around the world,’ said Professor Cooper.

The massive tree – with a trunk spanning over two and a half metres – was alive during the Laschamps.

A log from the ancient Ngāwhā kauri tree. The massive tree – with a trunk spanning over two and a half metres – was alive during the Laschamps Excursion

‘Like other entombed kauri logs, the wood of the Ngāwhā tree is so well preserved that the bark is still attached,’ said Dr Jonathan Palmer, a specialist in dating tree-rings (what’s known as dendrochronology) at the University of New South Wales.

Using radiocarbon dating – a technique to date ancient relics or events – the team tracked the changes in radiocarbon levels during the magnetic pole reversal.

This data was charted alongside the trees’ annual growth rings, which acts as an accurate, natural timestamp.

Tress can be aged by measuring their girth – specifically the rings that develop over time that increase that girth.

The team identified a significant increase in atmospheric radiocarbon during the period of weakening magnetic field strength that preceded polarity reversal.

The team compared the newly-created timescale with records from sites across the Pacific and used it in global climate modelling.

By modelling the consequences of this increase, they found that the geomagnetic field minimum (when Earth’s magnetic field only around 6 per cent of what it is today) triggered huge changes in atmospheric ozone concentration and circulation.

These shifts may have caused both global climate and environmental changes observed in other climate records that occurred about 42,000 years ago.

‘The more we looked at the data, the more everything pointed to 42,’ said Professor Turney. ‘It was uncanny.

‘Douglas Adams was clearly on to something, after all.’

The findings have been published in Science.

Our planet’s magnetic field is believed to be generated deep down in the Earth’s core.

Nobody has ever journeyed to the centre of the Earth, but by studying shockwaves from earthquakes, physicists have been able to work out its likely structure.

At the heart of the Earth is a solid inner core, two thirds of the size of the moon, made mainly of iron.

At 5,700°C, this iron is as hot as the Sun’s surface, but the crushing pressure caused by gravity prevents it from becoming liquid.

Surrounding this is the outer core there is a 1,242 mile (2,000 km) thick layer of iron, nickel, and small quantities of other metals.

The metal here is fluid, because of the lower pressure than the inner core.

Differences in temperature, pressure and composition in the outer core cause convection currents in the molten metal as cool, dense matter sinks and warm matter rises.

Charged metals passing through these fields go on to create electric currents of their own, and so the cycle continues.

This self-sustaining loop is known as the geodynamo.

The spiralling caused by the Coriolis force means the separate magnetic fields are roughly aligned in the same direction, their combined effect adding up to produce one vast magnetic field engulfing the planet.